today the news
stays
won’t you?

I have been possible
once
and for all

I who can’t fight
feel it
even name it
anymore

that’s how it has to feel

and what I think
is I
would
love you (Rachelle Toarmino, “What Kind of Love is That”) 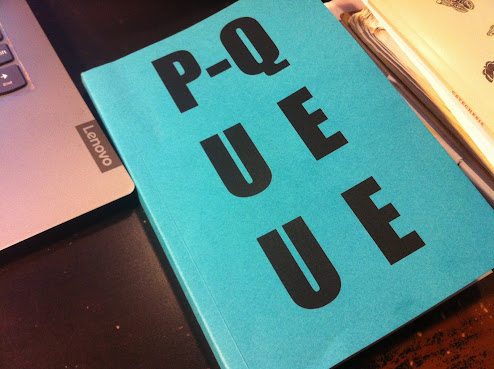 Anyone who has been paying attention to my reviewing over the years already knows that I’m an admirer of the annual journal P-QUEUE out of SUNY-Buffalo, having reviewed most of the volumes-to-date (see reviews of sixteen, fifteen, fourteen, ten to thirteen, seven and eight, and five; and I’m still hoping that copies of the first few volumes might be possible to find at some point). Edited by incoming editors Dana Venerable and Zack Brown, P-QUEUE has always provided a high quality of experimental writing by an interesting mix of emerging and established writers, in no small part, I’m sure, due to the strong writing program that exists at the university (and issues deliberately don’t repeat authors). For similar reasons, I used to be a big admirer of the annual Headlight anthology as well, produced through Montreal’s Concordia University, another university with a strong creative writing program, but I haven’t seen an issue there for about two years [see my review of the last ones I saw,here]. This issue of P-QUEUE includes work by Nathan Alexander Moore, Aimée Lê, Julianne Neely, Tracie Morris, Claire Tranchino, Will Alexander, Edwin Torres, Rachelle Toarmino, Amy Catanzano, Julie Patton and Jiwon Ohm, most of whom I had been previously unfamiliar with. For their introduction, editors Venerable and Brown include an exchange between them on their thoughts on approaching the issue, and on the work they’ve chosen to include. The conversations reads as a bit long and meandering, but provides an interesting overview of what they’re working towards as editors, writers and simply creative humans living in the world (all of which becomes even further relevant when one considers that most editors of the journal-to-date are involved in editing multiple issues, suggesting an attention and aesthetic towards not only what we are currently reading, but what is to come). As Venerable writes as part of their exchange:

[…] The movements of judgement, of racism, are too urgent, too forceful, too violent. Dare I/we go on? Ohm shares that we must. Lastly, in “Apologies…” Ohm’s list of revisions / revised thoughts—emphasis on #11 and #12—inspired by T.S. Eliot moves through a constant state of stability within instability, something that I think about a lot within my own life and writing. “The rock which forms in your throat when you look at one’s back.” Is this “love,” always in flux?  I agree with Ohm’s notes that I may also never grasp what poetry is, but it is that searching for meaning, that processing, that allows for poetic conversations, musical dialogues of care, very much present in this volume. The task at hand, or at body, is to put as much work into our actions, our ethics, our lifestyles as we do in our artistic creations.

Z [Zack Brown]: Agreed! The pieces in this volume, each in their own way, work at the fulcrum between language and body, which shows (to circle back to the beginning of our discussion) that political life and poetic life are perhaps not the same, but nonetheless forcibly entangled. What we do with our bodies is guided by our language. […]

One of the first pieces in the journal to jump out at me was the  ten-part sequence “An Elegy for Unsaid Things,” by Nathan Alexander Moore, a recent SUNY-Buffalo graduate currently pursuing a doctoral degree from the University of Texas. The fourth poem in the sequence reads:

What does it mean to be moved?

To run from the present?

To move toward uncharted geography?

To pack your life into parts,

Dumping all your desires & detritus into boxes

Affixed with the promise of packing tape?

To remember to not say goodbye?

To know you will fade into a barely realized recollection?

To get into a car & refuse to hold (back) your tears?

To wonder if the future even exists

As you watch the present crumble

Into a fine point in the rearview mirror?

To ponder how you will get to the other side of the horizon?

I am also very taken with (and amused by) Vietnamese American writer and artist Aimée Lê’s selection of prose poems, such as the piece “WHY AM I ALWAYS FALLING OFF A CLIFF?” that opens: “Why did I think if you missed a meal, you might die? I asked, ‘When you’re diabetic and you miss a meal, do you, like, die?’ Notice I only said that after the banana was secured in your jaw. I am very brave. I don’t like to be a cause of panic. I walk very calmly out the door and then break into a run. I didn’t used to run during the day because I was scared that the drivers of cars would see me trying too hard. Why do all these insects, flower petals and ash keep sticking to me? Do they think I am an altar?” I clearly need to read more work by both of these authors. Award-winning poet Julianne Nealy, author of chapbooks through Slope Editions and Garden Door Press, includes this note at the end of her poem “Miracle”: “After learning of the theme—MOVEMENT—I was interested in learning about what it takes in our bodies to actually make a movement occur. What I quickly learned through an overwhelming amount of dense and abstract scientific language, that is a miracle our bodies move at all. This is the meditation on that, that follows.” Her poem includes:

Side of muscles acting on either biaxial
Or without bending of

Articulation allows for rotation causes
The ulna into contact with a

Type of a circle it laterally away from
Circumduction is suddenly

Movement that take place within the
Contraction or thigh either the

That help to stick out the limb laterally
Away from side

Produced by the limb superior rotation
Causes the opposing movement such

Joint gives the ball and involves a joint
Allows the coronal

Structural type while adduction and gives
The summation of movements identify

And so on, moving at quite a pace for a number of pages. While it would be entirely possible to move through the whole issue, suffice it to say that this is worth picking up. You should probably pick up a copy. Why haven’t you picked up a copy?