Going through the Motions

Tendons come unstuck.
Poem titles float downriver or are already
within reach. Some have been plucked,
masticated, swallowed. The best
are in our pockets.
Discrete but perfect, they do not let us down.
Don’t spend all your titles at once.
I misspell park the French way,
disobliged the tremendous finality of k.
There are traces of sweetness in this aroma
though it is nearly depleted.
The modesty of c. Avenue due park is so ordinary.
We were practical and purposeful.
We bought lunch in a deli and sat on a bench,
even sunshine a spectacular sight. 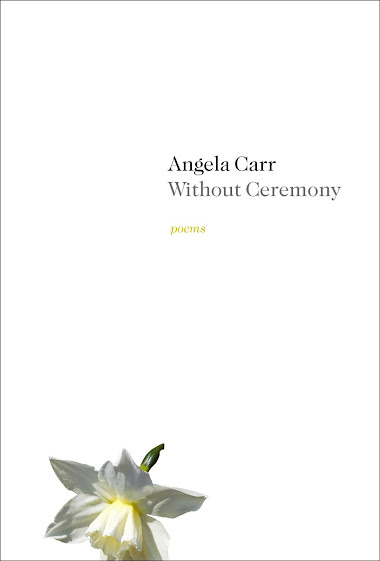 Poet and translator Angela Carr, a Canadian expat currently living in New York City, has just released Without Ceremony (Toronto ON: Book*hug, 2020), a fourth full-length title after her poetry collections Here in There (BookThug, 2014) [see my review of such here], The Rose Concordance (BookThug, 2009) [see my review of such here] and Ropewalk (Montreal QC: Snare Books, 2006). Carr’s poems in this new collection have such a sense of being composed across great distances, written across large canvases and stretched out as far as possible. They might hold to small moments and points, but are, one might say, bigger on the inside. Her poems, from point to point, are able to cover vast and incredible distances. As the duelling couplets of the first section of the opening poem, “Direction of Fight,” begin: “At the fish market in Union Square we choose flounder filleted / and decline the oyster. // From an elderly farmer who looks like your grandfather, / we buy six narcissi: his only product. // They’re a pale buttery yellow, flecked with old-fashioned Monarch orange, / a colour scheme from your grandmother’s breakfast nook, a scene that vanished in the twentieth // century, as quickly as this perfume is subtle, yet the aroma does not know how to fill the subway car.” As part of an interview posted at Toronto Quarterly on June 23, 2014, she responds that what is next for her includes, quite simply, “Longer sentences.” and this collection might just be the result of that deceptively-simple answer. Her sentences don’t merely extend as far as length, but in breadth, running a line through and beyond her couplets, sentences and poems to connect, one to the other. “A metal-framed mirror and a human figurine,” she writes, to close the poem “Quiver,” “a wooden horse with broken legs, hard words and / weathered words, warm and worn, the future tense and its finely detailed designs we pull over / ourselves at night for comfort.”

But one night the door will open and we’ll lean into the empty
room where footprints in the dust are impermanent
and prosaic. Idle ink stains on the walls,
a stack of Juicy Fruit on a bookshelf,
shiny balled wrappers, all signs in a mercurial
syntax that evaporates on exposure.
when we are seen as lesbian
they’re uncertain which letters have fallen from the tree
and which are bruised, what makes the end of a given word feminine.
the words come to touch us deeply but we keep
them at a distance, sentimental and burning.
A lemon is squeezed
in a country they will never visit
and only fleetingly exists. As you know,
the book does not begin in the liquid state;
just like civility, taste is strongest
when two grounds are opposing
and streams roar, fervent.

There is something of the evocation in these poems, and some lovely flourish. The poem “Catalogue of Disasters,” for example, speaks with a delightful wave of the hand, as it begins: “I was named after the divine messenger, Angelus domini. // They motioned to flick the air above my head and heard a hollow pinging sound / as their fingers struck my invisible halo.”

Posted by rob mclennan at 8:31 AM
Labels: Angela Carr, BookThug, The Toronto Quarterly