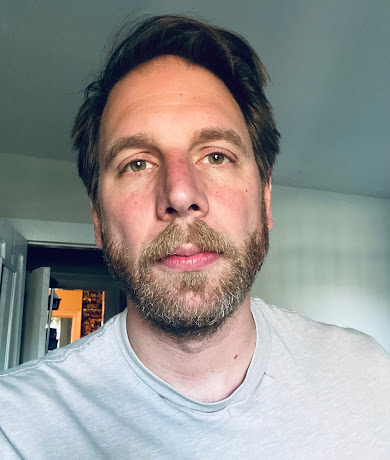 Noah Falck is the author of Exclusions (Tupelo Press, 2020) and You Are In Nearly Every Future (Dostoyevsky Wannabe, 2017). He lives and works in Buffalo, New York. Learn more at noahfalck.org.

My first chapbook Homemade Engines from a Dream came out in 2007. I don’t think it changed much about my life, other than my own personal excitement about having something like a chapbook that I could put in the mailbox of friends. My newer poems are more meditative and considerate. I hope they are pursuing more meaning, and working to understand time. Everything feels different from 2007. Everything is.

I want to say I came to poetry through the obsessive act of listening to music. A deep and continued listening that at some point transferred over to poetry. I’m still trying to listen.

I typically don’t think in projects. Though it may appear that Exclusions is a project book, it wasn’t intentionally written to be one. I’m a very slow writer. At the same time, drafts come fairly quickly. But they need to be hidden away and returned to with fresh eyes, and often torn apart and rebuilt over and over again. I just sent a short poem of 12 lines to a friend for feedback. It’s a poem I’ve been returning to for over a year. I still scowl at it.

When I keep returning to an image or an idea continues to show up in my notebooks, I know it’s going to be a poem. Though I’d like my poems to make it into a book, I typically am not thinking conceptually about a book. I’m just writing poems and trust that over time they will speak to each other in ways that will initiate a spark.

Readings are not part of my creative process, but I do enjoy them. Or at least the idea of them. Perhaps, I like the getting together portion, the collective attempt to listen to art. And then the hanging out afterwards. The conversations that take place after a reading are often quite fun and/or scary.

Peter Gizzi stated that his poems “narrate his bewilderment.” This seems pretty spot on to how I feel. I’m not typically answering questions with my poems. I’m more interested in working to appreciate the strange and capture those moments that make me hungry to be alive.

I’ve always thought writers are those that pay attention in new ways. And then riot with language until people listen.

I think having other people read and offer feedback, whether it is an editor, a partner, a neighbor, is essential. Those people kind enough to give your work time, space, and thought can help you see if you are moving in the right direction or any direction at all.

I try to write every day, in the mornings when the house is still quiet. And if no writing actually happens during that time, I try to at least get to that state of mind. It may happen on the bus commute to work or a bicycle ride along the lake. I’d say almost every day begins with coffee.

Basketball, music, this truly golden age of television we are living in.

A little league dugout where someone pissed a word across the walls the night before.

I think everything influences my work. Landscape has a larger impact than I would have ever thought. It always shows up without my knowledge. Also, music in an indirect way. The same goes for paintings, collages, and graffiti. I walk around with all of it, and some of it works as a sort of motivation.

A train ride across the country — not necessarily this country.

Is an architect the only correct answer?

Writing was the only place where I was encouraged to use my imagination.