the guest cabin’s dimensions
are those of Thoreau’s, the boards
and logs, rough hewn.

there is a sink with a tube
to a bucket, plastic keg of water
which forms a modern luck of birth.

spring blossoms white. the diva cup
is full, squatting to pinch it out
it spills into the thirsty floor.

a sin, a repenting. I have made
a blood sacrifice yet feel guilty
more keenly than before.

I scrub but it’s absorbed. I pour
water: the water stains, worse,
watermarks a ripple in the grain. 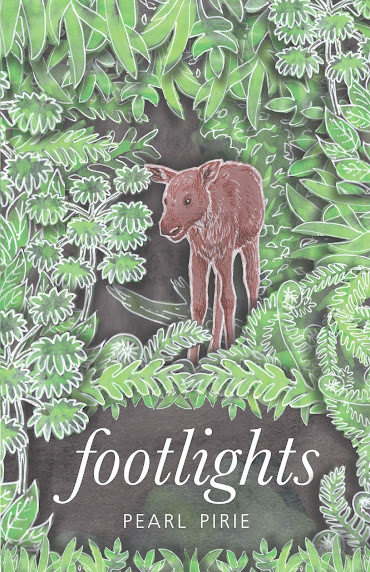 Composed from the wilds of her rural Quebec home, poet, editor and publisher Pearl Pirie’s fourth full-length poetry title is footlights (Regina SK: Radiant Press, 2020), following on the heels of been shed bore (Ottawa ON: Chaudiere Books, 2010), Thirsts (Montreal QC: Snare Books, 2011), which won the Robert Kroetsch Award for Innovative Poetry, and the pet radish, shrunken (Toronto ON: Book*hug, 2015), which won the Archibald Lampman Award (Radiant Press is the publishing house formerly known as Hagios Press, in case you were unaware). There is something I’ve only been realizing recently, with the publication of Perth, Ontario poet Phil Hall’s latest poetry title, NIAGARA & GOVERNMENT (St. John’s, Newfoundland: Pedlar Press, 2020) [see my review of such here]: the extent to which Pirie’s writing has been influenced by Hall’s rhythms, cadences and lyrical impulses. Knowing full well that Hall came first, I could hear numerous examples of overlap when reading Hall’s latest, an idea that is simply reinforced through my reading of Pirie’s footlights. “no cattle were harmed / in the making of these statements.” she writes, to close out the poem “what used to work with me,” a notion and notation that could easily have emerged from one of Hall’s own poems. Not that there’s anything wrong with influence, whether through Hall or anyone else, and Hall’s attentions to and pauses around the small, even within such large, complex and often emotionally difficult realms, is worthy of larger and repeated influence [full disclosure: I worked my own Hall variations for a few years, circa 2004-7, around the time I was deeply immersed in his writing for the first time].

Whereas Hall works the full-length poetry book as his unit of composition, composing poems as extensions of each other into a singular, collaged purpose, Pirie’s book-length constructions are more attentive to the self-contained poem. It is as though Pirie’s attention doesn’t emerge through the impulse of the book-length sequence via Hall’s (where my own attentions leaned into his work). Instead, her poems cohere together differently; grouping as gatherings that are then themselves gathered, to form book manuscripts. Her poems are less sequential than an impulse of cohering molecules, that assemble for the sake of a larger, singular shape and structure.

Still, one should also note that, much like her Ottawa contemporary, Amanda Earl, Pirie is constantly experimenting with form, and the structural elements of her poems appear to shift between projects: while one particular chapbook or book-length work might lean toward longer, more extended poems within the larger structure, this particular work favours (although not exclusively) either the couplet or three-line stanza, extending her individual lyrics no further than a page. And increasingly across her published work, hers is a deep attention in a short space, in a density composed with quick turns and snap. “is it stoicism to be prepared,” she writes, to end “the door of birdsong,” “to dig the darling’s grave // or depression’s eye-slits / in feathered masquerade? // as if leaving a movie, blink to / these hundreds of greens.”

And while there are certainly elements of Hall’s halts, breaks and pauses in her work, Pirie is more magpie than killdeer, picking up elements to incorporate into the structures of her simultaneously sketched and crafted moments of accident, interaction, meditation, observation and description. Her poems seem composed as ways in which one might not just work to articulate the world, but through speaking, better comprehend. “there’s something that isn’t / intention.” she writes, to open “in the room grown dark,” the first poem in the collection. Much like Hall, her narratives are thoughtful, carefully casual, intimate and provide the sheen of disjointed, bouncing across sound and language while covering a much larger and connected ethic. “grey is not the season for eyes,” she writes, to open the poem “as the tops die,” “but for hands, tongues. / under overcast skies / cup from the frost-wet earth / potatoes.”

Her poems seek and search, and work to gather and absorb as much as possible. “what if the universe isn’t moral?” she asks, to open “homogenized script,” “what if most people are not, in fact, lost?” We three might all have emerged from different corners of rural Ontario, but there is an articulation, a hint, of violence that exist within the work of both Hall and Pirie; external forces beyond their control that they have endured, attempting since to process, and potentially move beyond. There is something just under the surface of these poems that she both teases and tears at, working to move through and move past, as though her poems have finally become mature enough to allow her to wrestle with it in a slightly more overt form. And yet, at the same time, one could argue that Hall’s entire work-to-date is made up of a single, life-long poem if you set his books end-to-end; Pirie’s might be as well, although with less linear a trajectory between concurrently-produced projects, books and poems, composed more as an assemblage of fractals from the central point of Pirie herself, writing within the hub of a lyric trajectory of exhuberent chaos and carefully composed poem-thoughts.

to nod, receive the destruction,
the stripped & the desecrated.

dubbing his dick move a teapot
does nothing towards a cup of tea.

his sense of self? acorns drop.
those who consume them will.

footlights is organized into five sections—“even electricity wants to continue,” “footlights,” “for the purposes of night,” “ample misadventures” and “pretending there are distinctions”—foregoing her occasional interest in sequences for groupings, or even suites, of short lyrics. In an interview posted July 14, 2019 as part of the Wombwell Rainbows Interviews series, she refers to the poems in this collection as “more zany and offbeat poems,” and there are pieces here that reference overly confident young poets who read in open sets (but leave prior to the featured reader), staff at chain bookstores, birdsong, gardening centres and food shopping. In short self-contained bursts, Pirie’s poems in footlights include anything and everything you might imagine, whether a New Year’s Eve party where the narrator wishes everyone would leave, already, at 2am, or grocery shopping, as the distance of commentary provide an immediacy to these poems, one that also provides the impression of the notebook quick-sketch. The poems sparkle for that immediacy, one that only really emerges through the craft.

lost in a very small maze

my resolve is to solve her public
smile. stemmed from his shoulder clap
her pat has a thumb dug in as a warning.

much is in the spin. my axle is mercy,
dizzying mercy. feeling a drop run
down my leg I think blood. Sweat, I think.
my unconscious has been leaking again.

even when he doesn’t look
the looking away is as much of a telltale.
yet he would blindfold her too.

if looks could melt steel, a molten river:
her claim staked. her beefcake.
who I could nourish, protect behind my gates?
her from herself, or him from her?