Yes. The shifting, after the return of the tide, and my own. A question rushes out of the stillness, and then advances an inch at a time: has this day ever been before, or has it risen from the shallows, from a line, a sound?

When we name things simply, with words preceding their meaning, a cosmic narration takes place. does the discovery of origins remove their dust? The horizon’s shimmering slow down all other perceptions. It reminds me of a childhood of emptiness which seems to have taken me near the beginnings of space and time.

Now, dark animals roam in the forest, you could touch them. A particular somnolence takes hold of you when the shadows start growing. Then, the heart creates different beats. You want to touch the leaves, look intensely at each tree. The night falls, already tired, already bare. 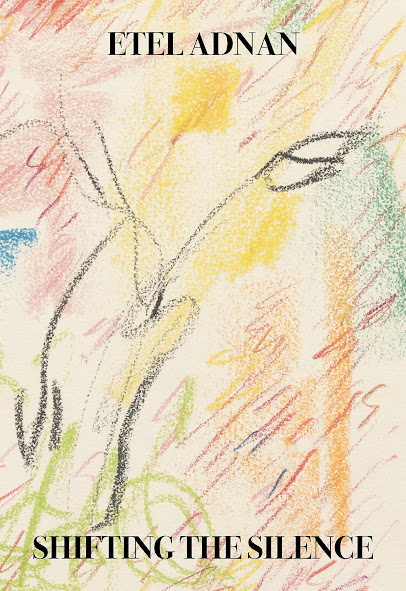 The latest from Beirut-born Parisian (having relocated to France after decades living in California) poet and painter Etel Adnan is Shifting the Silence (Brooklyn NY: Nightboat Books, 2020). Shifting the Silence is an extended lyric meditation composed, the press release offers, as “Adnan grapples with the breadth of her life at ninety-five, the process of aging, and the knowledge of her own approaching death.” It is interesting how Adnan’s approach isn’t to write against silence, but, perhaps, instead, through those same silences, attempting to articulate what those silences provide, and everything she has accumulated along the way, as she rises to meet it. She writes of her own silences, and the silences of history, and of war. She writes of trauma and tragedies overlooked, and some forgotten, some deliberately so. Early on in the book, she writes: “And having more memories than yearnings, searching in unnameable spaces, Sicily’s orchards or Lebanon’s thinning waters, I reach a land between borders, unclaimed, and stand there, as if I were alone, but the rhythm is missing.” She writes of silences that cause damage, and others meant to heal. She writes of the silences that death might bring, which is itself, a method of forgetting.

Composed in English, Shifting the Silence is her first book since the publication of Time (Nightboat, 2019), a volume of her poems translated from French into English by Sarah Riggs, a book that won the 2020 International Griffin Poetry Prize [see my review of such here]. Admittedly only the second title by Adnan I’ve read, the sense I have from these two works is her engagement with the lyric sentence, composing meditations and commentary on writing, war, geopolitical and social histories and the ongoing the beauty of physical landscapes. She writes of contemporary and ongoing wars in the Middle East, climate change, ancient histories and the view from her window. Shifting the Silence, structured as a sequence of prose lyrics, is composed as both meditation and, as she writes, an “incantation,” on living and a life lived; a series of lives lived. She offers: “We have to reconnect what words separated.”

There were times when to be overlooked by death created sacred terror, and those times have returned. The rivers continued to run. I followed some, and others I drew. Most frequently they came as dreams, some were of an amazing magnitude, others mixed their waters in oversized waterfalls. I loved them in all instances. But death, I didn’t.

Death abandoned us, not coming when it was due, not answering. Its enemy, a form of life unstoppable, I mean the Oceans, used to appear on stage for events of gigantic dimensions. They spoke human languages besides their own. We pushed them back gradually, polluted them to the brim. We heard not a single cry.

Io cannot die. Prometheus cannot rest. The oceans are helpless. As for us, we can neither live, nor disappear. The stars, at night, emit sparks with the rhythm of our breath. My window is blessed. It opens in daylight on the fields of Greece, that’s what I’m trying to believe.

One thread of the book is anchored in the Mediterranean, where so much is still held in conflict and tragedy, and impossible to overlook. When looking ahead to one’s end, one so often looks back to beginnings, and ideas of home, and Adnan’s sense of home is complex, from her Parisian view to her decades in California, to her earlier days in Beirut. Her sense of her place is simultaneously specific and unspecified, as though her sense of home, itself, contains multitudes. “I would have been an archeologist,” she writes, “and would have found a necklace in pure gold, and wondered to whom it had belonged. Not necessarily a woman. I’m a passenger on planet Earth, itself a passerby. The empire crushed as if it were made of cardboard, and we retrieved some memories which will die with us, or survive, for a while… But everything lasts just for a while, probably eternity itself.” This is a book of nearing endings, but it is not an end, or the end; not in the least. And one can only hope that there might be further miles for her yet to travel. As part of an interview with Adnan on her two artistic threads—painting and writing—for a June 2018 article in Apollo magazine, Gabriel Coxhead writes:

I ask her about this sense of a split, this division in her creative output. ‘I’ve thought about this many times,’ she replies. ‘I didn’t plan it, but looking back you’re right. If I were just a painter, maybe my work would have been different, more encompassing. But my writing is rather pessimistic, because of the angle of history I got involved with, being born in Beirut. Also, it’s because words are social. I think it’s more natural if an event bothers you to express it in words. Art also is a kind of language – but it’s a language of feeling. When I paint, I am happy. I am both an optimistic, happy person, and caught in and aware of tragedy. And although I lived in California most of my life, I never had a spell of time where I could forget about the problems of the Middle East. Every morning the newspaper would remind me.’