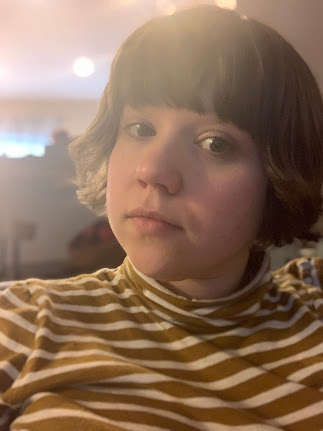 Jaime Fountaine was raised by “wolves.” She is the author of Manhunt (Mason Jar Press, 2019). She lives in Philadelphia

To date, I have only written one book. Finishing something feels way better than giving up and deleting it, but it also requires significantly more effort.

I was a lonely, imaginative child, who spent most of her time reading.

Most of the time, I’m writing despite myself, rather than as some well-thought out routine. I spend more time in my head than I do on paper. Sometimes that means that after a long time considering an idea, I can bang out a pretty solid draft in a day. Other times, that means I write four sentences a month and never finish a story.

Usually, a concept or a line or a voice will make its way into my head, and I’ll sit with it for as long as it takes to build a story around it, or give up.

I’ve been running reading series on and off since I was 23 (I’m 35 now), and they’ve made me a better writer, a better community member, and I think a better friend. I’m perhaps too comfortable speaking in public, but using that impulse to support work I’m interested in, and to see how a voice or an idea actually lands has been invaluable to me.

I like to say that, since it’s out in the hands of readers, it’s up to them to decide what my work means, which is both technically true, and a great way to let myself off the hook.

I have no idea! I tend to avoid making sweeping, generalized statements that I will probably regret saying in twenty minutes. I shouldn’t be a spokesperson for anything but my friends and Tide Pens. I get a lot of use out of Tide Pens.

I had an incredible experience with my editors at Mason Jar. They paid an incredible amount of attention to my novella while working on two others simultaneously, and the book is so much better for it. I’d never worked so closely or extensively with editors before.

My friend Lorraine once told me that procrastination is basically a way to insulate yourself against perfectionism.

10 - How easy has it been for you to move between genres (fiction to an advice column)? What do you see as the appeal?

Most of my non-fiction writing (advice column, interviews, a couple of essays) are so much in my own, ridiculous voice that it’s technically easier than developing an authentic voice for a character and keeping it consistent over many pages. It’s not difficult to be a goofy, public version of myself, so doling out advice is much easier than being publicly honest about my feelings, which I don’t enjoy one bit. I’ve done it, and I’ll probably do it again, but it’s much harder for me than writing fiction is.

I have no set routine for writing. When I’m in the middle of a project, more of the work is done in my head than on the screen/paper. When I’m not writing, I’m just not writing. I hate journaling, I hate staring at a blank screen, I hate generative exercises. And unless I owe somebody something, I just let myself be a brat about it, because I always come back to writing on my own.

I’m much better at figuring out these kinds of problems with my passive brain, so I usually cook when I’m stuck on something writing related. The chopping and kneading soothe me, and give me a creative endeavor with a positive outcome (most of the time, at least) that I can focus on instead of thinking about the problems I’m having with a particular narrative.

I saw Twin Peaks in kindergarten, and it imprinted on me in a very big way. Watching it as an adult felt a lot like going home. I tend to think about my writing in terms of what things feel like for the characters, rather than how it should look for an audience, and finding a way to translate that has been very informed by the work of David Lynch.

There are a lot of songwriters who are very good at building entire worlds between words. Tom Waits, Nick Cave, and the late David Berman are particular favorites of mine.

I don’t think I could’ve written Manhunt if I hadn’t read Steven Dunn’s Potted Meat or if I didn’t read Bud Smith’s essays about writing on his phone at work.

I am almost always reading, and I don’t really know how to quantify the importance that has on my work. There are so many great stories and books and essays that have made me a better writer, and there’s also a bunch of mediocre shit that’s done the same. I’m terrible at making lists because I always leave something off.

I haven’t traveled much. I don’t see that changing anytime soon, unfortunately.

I very much have a day job, as an administrative and outreach coordinator at a public health research institution. I send a lot of emails.

I wasn’t good at other stuff? I can’t paint or draw or play an instrument and I have very limited patience for crafts.

I’ve been terrible at watching movies or TV of any real substance. I was once a real asshole about film, but now I’m just a tired bitch who rewatched Hot Rod for the fifth time last week.