The path forward begins with a reference to what was left behind.

Chilliwack, British Columbia poet Taryn Hubbard’s full-length debut is Desire Path (Vancouver BC: Talonbooks, 2020). As part of her 2019 interview for Touch the Donkey, she speaks of the poems that would eventually appear as part of this collection:

These poems are from a project I’ve been working on for the past few years that explores home in the suburb—in the intersections, overlaps, and gaps between urban and rural. These are walking poems and driving poems. In growing suburbs across the country, there is a push to urbanize, to rethink this, often sprawling, space. Urban renewal is foreshadowed all over contemporary suburbs, where vacant single-family lots herald anticipation of redevelopment into something more, something better, something healthier. But before that happens, what do we make of the space as it sits today? What monuments anchor the suburb now? I’m also interested in looking at what creates visual repetitions along superblocks, which in the poems you mention are gas stations, fast food restaurants, flickering flat screen TVs, and cars. Suburbs are sometimes described generically as simply bedroom communities for commuters who work in the city, but I think they’re more than that. 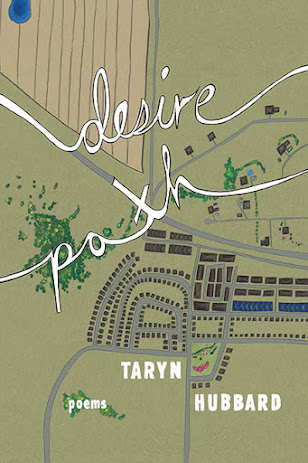 As such, Desire Path articulates the physical and liminal spaces of Canadian suburbs, writing her specific Vancouver-adjacent designations in both generally familiar and specifically western ways, from their distant, dead-end locales and links to larger, urban centres, to the ways in which the safety of the suburbs holds. “I’m sorry about the mess.” she writes, as part of “V3T,” “Pressure wash / the streets. They come back dirty.” There is a sense of isolation that works its way through these poems, something that does shift, slightly, through the pregnancy sequence “ATTEMPTS.” The isolations linger, even become pervastive throughout the collection, writing short bursts of the narrator both an integral part of and distinctly apart from the experiences described within. She writes as witness, almost as foreigner dropped into a locale for the sake of attempting to understand the nuts and bolts of how such a distinct community, away from the centre, operates. “Action on this TV is big enough to see from the street.” she writes, to open the poem “WATCH,” “My neighbours / watch TV because shows on streaming services are very good right now. Most / people who drive this street can tell this is just a shack with a huge TV / and a naked single-pane window.” Hubbard writes of the moon, liquor stores, unnamed neighbours, condos, strip malls and teenagers, and one can see traces of, say, Sachiko Murakami and Elizabeth Bachinsky here, two poets that have also written of Vancouveresque urban and suburban sprawls. Hubbard’s poems are sharp, and combine description, commentary and imagistic bursts, combining the notion of home with return, arrival and the possible need for eventual escape, such as the poem “FIND A WAY HOME,” that writes:

spit – it’ll be okay, let it wash
away with the forecasted

rain. All these people
drove here but come

morning not a car’ll be
in sight.

There is something underplayed in these pieces; poems that announce themselves precisely by not doing such. Part of what is compelling about this collection is her ongoing engagement with multiple forms, as the halting phrases of her lyric precision become an accumulated rush through her prose poems, or stretch across longer distances via multiple-page sequences, whether the five-part “HEIRLOOM” that opens the book or, further on in the collection, the fifteen pages of self-contained fragments of “ATTEMPTS,” that opens:

When you have a treasure, accept it right from the start.

So I do. I start over. Start over and over again, like I should have from the beginning.

I have a treasure, and it’s starting to manifest.

The treasure was a state that took hold late July when the air was hot and thick with smoke from wildfires three hours east of us in the Interior. The ash felt like living and I felt like living ash. I hadn’t expected this manifestation and was absent from what was happening on my body; I went about my day.

I knew myself (or believed as much) but still, everything that grew in me came as a surprise. Still, it was growing.

The afternoon was like any other, but the smoke.

Posted by rob mclennan at 8:31 AM
Labels: Talonbooks, Taryn Hubbard