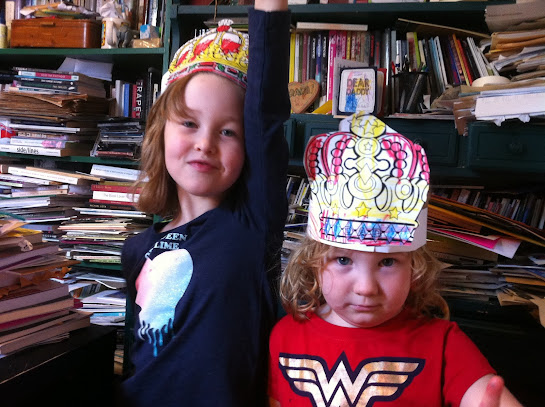 One element I’ve appreciated is how well our two young ladies play together, making up games and stories and songs. We knew of this prior, but our appreciation deepens. Once we wrestle them off the tablets, our first couple of weeks included the television on in the basement, which quickly became background to their attentions. After a while, they stopped even bothering going downstairs at all, unless they were wrapped up in some complicated game involving forts or babies or Cinderella. How many times has our dining room table become centre-stage for one of their structures, or where they’ve self-determined a Lego city, a mound of drawings or some other invention? Today, self-slathered in sunscreen, they navigate the hose and their wading pool out in the backyard, occupying themselves for hours. I grew up on a farm, after all, so I very early on learned the benefit of managing my own time, wandering the fields and collecting stones. The last thing I want to do is micromanage the young ladies, although I do attempt to get Rose to draw daily in one of her notebooks, and report on her drawing. We’ve only managed this once, but I keep trying her. I check in on them, regularly. Or they come inside, seeking freezies. Little wet footprints on the floor of my office that run down the hall.

Another element is the array of stories that have drifted up, out of the ether, of comparable stories from days-gone-past. This is not the first time in memory that those in the world have lived through such a situation, even if some of the details might be slightly different. Public television offers a small tale of a centenarian who is living through the current pandemic, born during the lock-down of the Spanish Flu, her mother somehow managing solo throughout birth and her newborn daughter’s first few months. You can do this, the piece offers. You can get through this. In the June issue of Smithsonian Magazine, Emily Moon writes “How the U.S. Fought the 1957 Flu Pandemic.” Her short article begins:

In April 1957, a new strain of a lethal respiratory virus emerged in East Asia, caught local health authorities by surprise and eventually killed masses of people worldwide. Today, in the age of Covid-19, that scenario sounds frighteningly familiar—with one key difference. Maurice Hilleman, an American microbiologist then running influenza monitoring efforts at the Walter Reed Army Institute of Research, saw the problem coming and prepared the United States ahead of time. “This is the pandemic,” he recalled saying. “It’s here.”

This is not historically abstract in the way the 1918 Spanish Flu pandemic might appear to us, but something, for numerous people, that occurred within living memory. To remember the 1957 pandemic, one might say, would put you disproportionally right in the path of Covid-19. Back then, there was notice, notification and response, and 116,000 Americans succumbed to the disease, although far more could have been killed. Over email, Bay Area poet Susanne Dyckman offers her own:

When I was a baby I had scarlet fever, and the Chicago Board of Health tacked a quarantine notice on our basement apartment door.  My mother’s not alive (gone too early) but I so wish I could talk to her about it, how she managed with an infant and a five year old, even something as basic as how she got groceries. All she ever told me was that we, as a family, were under quarantine (of course, somehow my doing?)  Later, still being a kid when she told me the story, I didn’t think to ask questions.  Now I’m beginning to see what it takes to manage.

According to family lore, my mother caught scarlet fever while babysitting, although I’ve no clue if there were any quarantines for her, still living at home with her parents, and four of six siblings. It was this that, according to family lore, affected her health and began the eventual loss of her kidneys, and her inability to have children of her own. Isolated incidents are never that, and there are lessons to learn from any situation. And yet, we can watch in real time as segments of the population refuse the lessons and warnings of history.

It is hard to look at those numbers and see, on the other side, individuals holding up hand-made signs with “I want a haircut!” With fear comes desperation. And there is little logic to, or argument against, desperation. Someone on Twitter suggests that of course there are those who consider haircuts, the casino and other short-term pleasures worth the risk. Because they’ve no hope for anything else.

Posted by rob mclennan at 8:31 AM
Labels: Aoife McLennan, essays, essays in the face of uncertainties, Rose McLennan, Susanne Dyckman