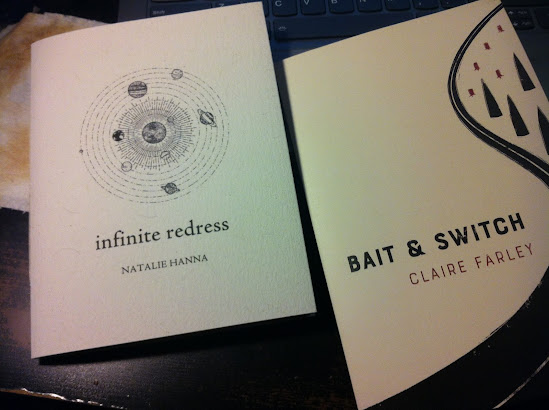 Have you seen all the items above/ground press has been making lately? I mean, if you were going to subscribe, I think this would be the time. And who doesn’t love receiving mail? Especially during these times. And you've seen all the pieces posting up at periodicities: a journal of poetry and poetics, also, yes? So much is happening! And the final issue of ottawater (months late, I know) is even en route. Promise!


Toronto/Ottawa ON: I’ve been eager to see Ottawa poet (and Canthius co-founder/editor) Claire Farley’s poems collected into a chapbook for some time, so seeing a copy of her Bait & Switch (Toronto ON: Anstruther Press, 2020) really is a highlight of these dark times. Farley’s lyrics capture small narrative moments, pared down from stories into sketches, seeking out elements that might otherwise have been overlooked. “The parking attendant drinks 7-UP,” she writes, as part of “LABOUR DAY,” “& I wonder about writing places / where people get paid fairly or unfairly / in faded sweatshirts / like my dad wears to fix his car [.]” Her poems push through and past the first-person narrative impulse as a means to an end, seeking out what survives, and what might just pass by. “Lately you say / we’re a heap of lives / to use & shore up,” she writes, as part of “TOFINO POEM.” She writes of stillness, silence and of being. There are occasional echoes of Lorine Niedecker through Farley’s articulation of rural landscapes: up against the water, against the stone. “I’d wait for silence / lung & gill // as if silence waited / to be filled,” she writes, to close the title poem. There is also something in the way Farley articulates differences and connections between individuals, and “borders,” as she discusses in her 2017 “Author Note” over at The Town Crier, an idea that is wrought, through its very nature, with complication and political implication. There are borders some might be able to cross, which are impossible for others. I look forward to seeing how her poems, and her thinking, develops; there is so much, there, just underneath the surface.

Once woods were barred in driveways
we searched suburbs in December

in the brightest Tim Horton’s
I’d ever seen

London/Ottawa ON: The author of nearly a dozen poetry chapbooks (including three from above/ground press), Ottawa poet, lawyer, reading series organizer, editor and publisher Natalie Hanna’s latest is infinite redress (London ON: Baseline Press, 2020). Hanna has come quite a long way over the past decade, from her involvement in the Sawdust Reading Series, as a board member of Arc Poetry Magazine and achieving “honourable mention” for one of her poems from the 2019 Diana Brebner Prize. Her poems have always been composed with a great deal of heart and careful attention, but her last few chapbooks have included an increasing attention to the small moment, density of language and a language of trauma, as she writes in the first section of the sequence “house”: “do you hear the thunder of / the breaking afternoon storm / in your sleep? // you don’t move / as the ground shakes [.]” The chapbook is constructed (at least, in the table of contents) in four seasonal sections—“SUMMER,” AUTUMN,” “WINTER” and “SPRING”—and opens with the short piece “conversation with mavreas,” a poem that references the Montreal poet and illustrator Billy Mavreas:

billy, you said the human project
was failing at directing its attention
to the proper place

i said i had no faith
in the human project

but it’s much larger than that, you said
stretching your arms, your fingers
into space/time

but i am short, i said

i am short and faithless

Given the collection is dedicated “For all who walk in grief,” it is quite an opener, setting a tone that works through trauma and the betrayals of the body, a myriad of death and loss, and a final invocation for and to Billy Mavreas, which I will let you discover on your own. Her heart is ferocious, and feels everything, even as she works to comprehend how the body learns, and what one might do with those lessons; working to dismantle the trauma and betrayals of illness, injury and grief, so as to better understand their effects. In the poem “house,” she writes: “everything is pompeii // we dare not move // you cannot hear / our last air / escaping [.]” She works against the seeming infinity of illness and injury, so as to possibly set right. And then there is this, the second section of the seven-part sequence “things pulled from the earth,” that reads:

why do we so love the bodies of things
pulled from the earth? she could have just kept us
and our tired secrets

what kind of life springs from death?
could we be spartoi, from a fierce dragon?
how many times must you kill and sow us
to soften the rage?