Three winters ago I was commissioned to write a libretto addressing the emerging topic of spiritual ecology. Although at the time I hadn’t heard the term before, it felt fitting, evocative, and wholly necessarily. It is a call for us to look deeper at what is happening to our world, for a spiritual response to our present ecological crisis.
[…]
As I read in preparation to write the libretto, I grew aware of how much more I needed to see. How long in the awakening are those of us born into western culture and industry, even amid the clear and collateral harms of late capitalism. Crucial to my understanding has been a namesake text, Spiritual Ecology, a collection of essays edited by Llewellyn Vaughan-Lee, that speaks of our enduring relationship to the earth in parallel to our unprecedented dilemma of ecological collapse. The tribal and spiritual leaders, activists, and ecologists behind these essays evidence our profound disconnect from the earth, the roots of this disconnect, and the ways we may begin to heal. Writing and exploring these works gave me an entrance, a way to understand what I have intuitively known for some time, and as we move toward a more connected existence, it dawns continually upon the conscious mind: We are not separate. Healing what is severed between the earth and us begins with a willingness to look. If we feel small in the mystery of things, then looking is our most significant step. The long poems that follow, the first of what is based on the original libretto text, are a reflection of that continued looking. (“Preface”) 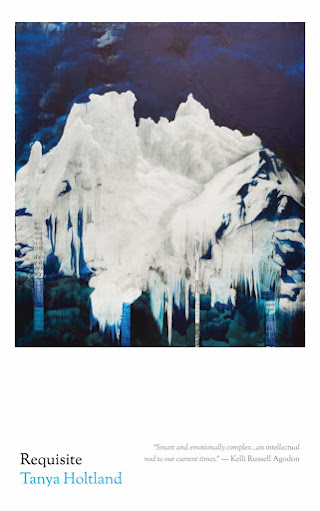 Los Angeles poet Tanya Holtland’s stunning full-length poetry debut is Requisite (England: Platypus Press, 2020), a lyric suite constructed as a quartet on, as she writes in her preface, “spiritual ecology,” and the ways in which we are interconnected to the physical and natural world. There is a meditative precision to Holtland’s lyrics, finely-honed with the ease of a quick sketch, but one that also knows how to pull apart the minutae of an idea, to stretch it across an expansive canvas. There are elements of Holtland’s ability to accumulate poems into sections and sections into a full-length whole that provide comparisons to the work of her partner, the poet Hailey Higdon. In Holtland’s 2019 essay for “my (small press) writing day,” she hinted at such a cross-influence between the two, a pair of writers occupying similar physical and emotional space: “To say that we influence each other as writers is understated only by what we influence in the larger field of each other’s lives.” Whereas I’ve long understood Higdon’s poems to exist in groupings that slowly reveal their interconnectedness (such as through the publication of her 2019 debut full-length collection Hard Some [see my review of such here]), Holtland’s work through this collection, as well, exists as a detailed suite of individual poems that, together, pattern to reveal their larger coherence.

Requisite is structured into four extended lyric suites—“Fated,” “Inner River,” “Other Names for the Future” and “The Story”—the first of which, adapted from an earlier existence as a libretto, is also broken up into the quartets of “MOMVEMENTS,” “INTERLUDES,” “TRANSITIONS” and “CODA.” As part of the first section of the first section reads:

An archipelago is a place to practice


the less visible
made whole

Holtland’s ecopoetic exists in start contrast to many other examples I’ve seen in the same vein: there is a reverence, but her lyric exists simultaneously at the level of the sequence, the fragment, the word. Even the smallest unit contains the whole in a way that is reminiscent of, say, Fanny Howe or Sylvia Legris. Her poems fragment and fractal, and accumulate in a singular direction. “If the impulse to expand comes to fight a hard rain,” she writes, as part of “Fated,” “remember // the curve of the earth / comes to meet you, / to the smallest / portion of the soul.”

There is such a wonderful, careful complexity to Holtland’s lyric meditations, setting pause against pause. She holds, she halts, she slowly pieces together. For Holtland, place is not simply being or landscape but an all-encompassing entity of which we are an important part, and even moreso, given the incredible amount of damage we have inflicted upon it. Holtland holds her distances against ours, and our distances against the ether. As the section-sequence “The Story,” opens:

From down here
every day shines

no matter the weight
of constant distance,

of not knowing personally the mountain
travelling with you against entropy.

Holy is the purest
comedy

and were I able, I would hedge
all of this sorrow