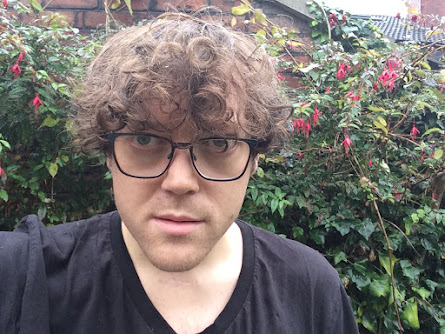 Michael Sutton is the author of the poetry collection music/lyrics, published by Hesterglock Press. He has new work in Streetcake Magazine, 3:AM Magazine, and poems forthcoming in Poetry Salzburg Review.

I never imagined my first book would be so image based. Up until recently I’d always kept my writing and visual art separate. Combining the two materialised a new course for me creatively. It’s like I suddenly spawned a new limb, or perhaps combined two limbs into one, like an arm-leg. The arm-leg at least deserves a second glance. My life is still the same, I think.

Probably because I started out writing song lyrics. I still have a pop song sensibility in some of my poems. I actually wanted to be a filmmaker before anything else, but it turns out you needed loads of equipment and stuff, a camera, editing software, actors etc. Particularly as a teenager I just wanted to go from thought to art as swiftly as possible, so poetry seemed like the perfect conduit.

I get it all down pretty quickly. Creation is the destruction of infinite possibilities. I like to get that massacre out the way as quickly as possible so I can cultivate the world that remains.

It depends. Sometimes thoughts combine and multiple routes become one, trickles-on-a-window style. With my book, music/lyrics, I think it was more the other way round, a single thought fissioning, and fissioning again, one route branching into many. There were numerous copulations, births, deaths, rebirths and redeaths on the way to the finished work.

These days I feel I’m always working towards something larger. There seems to be a trend in poetry publishing to have collections centred around a particular subject or theme, which is great. But there’s also something special about a collection that drifts capriciously from page to page. That’s what my notebooks were like when I first started writing poems, one piece completely disconnected from the last. There’s a freedom to that approach. It’s something I’d like to return to at some point.

I do. I usually read something with a joke in because I’m terrified of boring the audience. Recently I think my perception of poetry readings has evolved though. My involvement in the Poem Brut project has made me reevaluate the performance side of things. When the whole point of the reading is that it can-and-should be anything you want it to be, it forces you to consider the infinite possibilities of the moment, and the space, which inevitably leads to some really crazy and unique performances. That’s the second time I’ve mentioned ‘infinite possibilities’. I don’t have a great understanding of infinity, but these things feel infinite to me.

I’m presently interested in the manifestation of language. Where do languages come from, and where do they go? Linguistic imperialism. How ‘dead’ languages are rediscovered and spawn cultural reformulations. Creating new languages. It’s hard to say what the questions would be politically speaking. Perhaps the current moment requires a more journalistic approach.

Maybe just the act of writing is enough. I feel weird ascribing some greater significance to the role of the writer. Most writing will never be read by anyone, so it seems the greatest significance most writers will have is to themselves, rather than the externality of culture. If some cultural significance arises from published writing, then that might be an isolated instance of the writer/writing existing in an extra dimension of meaning. Auden writes earnestly about the role of the poet, ‘to unfold the unfolded lie’ etc. But all truth is personal truth. When Jeremy Corbyn was elected as leader of the Labour Party in the UK, he talked about building a society where people would be more free to do things like make art and write poetry. After a lifetime of political grotesquery, this was an awakening for me. Obviously not everyone wants to sit around writing poetry, but poetry is a signifier for a certain kind of freedom, leisure over labour, desire over compulsion. Maybe that is the spectral significance of the writer.

I only ever had that kind of critique in university. I found it helpful for the most part. The problem of subjectivity is something I’ve always struggled with intellectually, so offering and receiving edits can feel quite disorientating. I’ve experienced first-hand the benefits of insightful feedback, but I also have a proclivity towards work that feels raw and unedited. Reading the work of Raymond Carver was an eye-opener in terms of editing. If you read his What We Talk About When We Talk About Love, heavily edited by Gordon Lish, vs. the much denser versions of the stories included in Beginners, Carver feels like a totally different writer. I think I’d find it difficult to have an editor interfere so liberally with my art. Saying that, I mostly prefer the minimalist version of Carver, so I guess I’m all at sea.

‘Live your best life for when you die there is nought’. I don’t know if there’s nought or not, but it’s an encouraging consideration.

I struggle to wake, and take a few minutes to think about whatever regrettable thing I did the night before. I spend most of my free time either writing or editing in routine confusion.

Nighttime and solitude have always ensured non-stagnation. My friend Toby says there’s a greater ration of consciousness available at night because everyone’s asleep, but I imagine dreaming sucks up more pure consciousness juice than writing. Either way, I find the atmosphere of night very conducive to creation.

I’ve heard Cormac McCarthy say a similar thing, and I agree. But maybe, as you suggest, it would be more accurate to say ‘stuff comes from stuff’, which appears to be an essential law of the universe. I’m presently fascinated with quantum mechanics, and a lot of that stuff’s making its way into my work. I was listening to somebody talking recently about how they were torn over whether they should go into psychology or surgery. On the surface the options seem disparate, but he explained how both disciplines are centred around a desire to probe the unfamiliar, and he thought this was the crux behind his prospective career paths. I’m not really interested in quantum mechanics in any technical sense, I’m just compelled by the mysterious story, from the perspective of a fanciful artist.

Speaking of Auden, his The Sea and the Mirror had a strong influence on me. Edna O’Brien’s Night was similarly influential. I love anything that subverts itself and takes you by surprise. There’s a poem in the Poems from the Edge of Extinction anthology which repeats the line ‘are you ashamed of manure’. Annoyingly, I’ve forgotten the title and can’t seem to find the book, but it’s one of the few poems that’s ever made me cry. I’d encourage anyone to read that anthology. I’m also really inspired by the many amazing writers currently making captivating work, particularly those publishing through small presses. Their now-ness makes them feel especially important to me. There’s too many writers to mention, but I feel incredibly privileged that I can make a small contribution to that sphere.

I have a short film I’d like to make. It only consists of one shot which makes it seem like a more graspable goal. Also, visit the Volcán Wolf. And some other stuff which I won’t mention here.

My dad sells tires. Maybe I would’ve gone into the tire business. I’ve done a bit of work with him here and there and it’s not so bad. There’s a strange pleasure in sorting and stacking the rubbery rings, Goodyear 195/65/15, Pirelli 215/55/17 etc. The torus is a sacred shape.

I think I needed something to consume me. I can’t imagine a more fulfilling obsession.

Probably too many things at once. I just started working on a fake biography of Napoleon Bonaparte. It seems certain to fail. It’s written mostly in French (a language I can’t speak) and I’ve never even heard of any French presses, unless you’re talking about those things you make coffee with. I feel like if I write in French then maybe somehow I’ll learn to speak the language, like through osmosis. Au revoir.

Posted by rob mclennan at 8:31 AM
Labels: 12 or 20 questions, Hesterglock Press, Michael Sutton