Will I write to myself? I’m asleep in the library, a crack
Of tiny columns opens in my face, lets me read it. I circle

Around like a boy on his bicycle after dinner. If I don’t
Have room for what I pass, I keep looking anyway. My mind

Is at peace, as it settles in, like a colored wedge drops into a pie,
If the answer’s right. bluebirds are like me, moving around

With little dodging feet. I evaluate myself. I feel parched
On a winter’s day. I ramble as I read. When the snow perishes

From the yard, I say this must be very hard. The wind
Falls upon me with sounds from the trees. Here I am.

A little faster. How I love my old book. I set it on my knee.
Pages fall through my fingers, like phantoms. Maybe

I dissolve. Maybe I drone outward into night
Blues. On the palmy beach, I take all my words. What starts

As bubble, ends as foam. My name escapes me. I am
In Florida. I put my notes down. I take

My glasses off. I fill my hull. I race an island, as the current
Drives me. I say what I think. There will never be

An end. I hold my book. I check my page. Here I am.
Into alabaster, out of phosphor. I’m no place new. 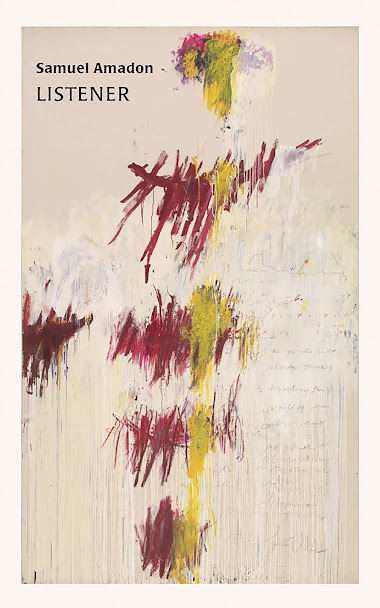 Composed as a suite of lyric poems, there is something quite fascinating in the ways in which the poems in Listener, the first work of his I’ve read, extend their thinking across the length of a page or two or three; stretch out the narrative, pacing and thought, quite literally an accumulation of one idea or sentence set after the last. His poems further in such a way comparable to the game of dominoes: each line reacting against the others, pushing further, and moving into spaces both entirely possible and unexpected. And his poem endings seem far less full stops that seek to conclude than simply points at which they end. As the ending of his poem “HOT TALK” reads: “My tongue was large. / I couldn’t help but // Hold it in my mouth. / If I said I was // Leaving, it was / The way I wouldn’t. // If I mistook my hand / For yours, I held it // There after / It wasn’t the same.”

I like the pacing of these poems, the way they move and meander, ebb and flow, catching curiosities, observations and wisdoms along the way, such as in the extended lyric “TOMORROWMAN,” a poem that includes: “Reader, / As you turn over your cheddar and bean burrito, // I like you. // I like that you can tell the difference between when // The microwave door is // Open, / And closed, when a bite // Enters your mouth / Still frozen, // And when it’s just a touch cold. // You chew it up either way. / I do that too.” These are poems that work to pay attention, and process the multiple threads of input we’re constantly bombarded with, from climate change, politics and culture to his day-to-day of teaching, family and other interactions. How does one properly and attentively listen, let alone process and discern, when there is far to much to hear? As he discusses the poems in Listener, and the shifts of his writing between book-projects, in a recent interview conducted by Isabella Casey over at Bennington Review:

The poems come out of who I am now—an assistant professor in a small southern city, living with my books and my family who I love, and dealing with the world—and they often feel weirdly suburban and pastoral. They also aim to bring out things that were in my work before, but were less recognizable. I mean probably just to me. I don't expect anyone else is looking at these things so closely, but, for instance, when I look back at Like a Sea now, I see poems written during the Bush administration. The poems in Listener I think capture a similar feeling of what it means to live now with the weight of climate change in the air—or more visibly in the air at least. Obviously, there's something else in the air now.