is it not unfolding as we imagined, are these not
the brass mackerels we welcomed home, is that
seven-headed god not the yellow box
we yelled for, is this not the street of the lost handshake
between Picasso and Breton, did the father not take
the mother to see the exhibition at war’s end
is a wheelbarrow not the green room
bristling with forest spirits, is renunciation
not the new consumption, was there not
one lip-smacking lie that set the twentieth century
in motion, was the passerby not fatally
ambushed by desire, is the young man not
booking a flight to Turkey, are the barracks
not being aired out again? 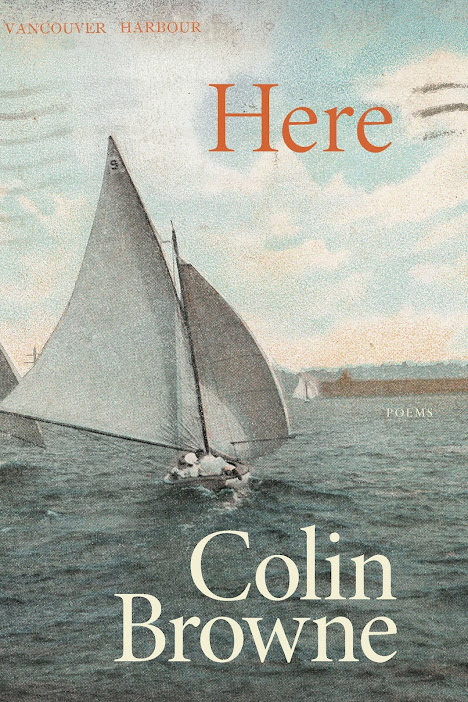 Vancouver poet, critic and visual artist Colin Browne’s latest poetry title is the book-length serial poem Here (Vancouver BC: Talonbooks, 2020), a stunning and serious collection that, according to the cover copy, “addresses the narratives of history, memory, and place as sites of occupation, Here.” Browne writes out colonization and his place within that, his family’s place within that, writing out a here that is open and urgent, immediate and constantly in search of a new slate of questions on our colonial past, so as to better approach the present. “what wisdom is that which / devises as an acct of human charity / the infliction of scarcity?” he writes, as part of “The Azure Notebook,” “next time / i’ll take the elevator to plankton [.]” For some time now, Browne has been composing an interconnected sequence of book-length serial poems on history and geography, setting a groundwork of personal history in the context of colonialism, all of which have appeared with Talonbooks: Ground Water (2002), The Shovel (2007), The Properties (2012) and The Hatch: poems and conversations (2015) [see my review of such here]. There is almost a single through-line between these collections, each book building upon his prior, existing as a quintet-length serial poem, the continuations of which we have yet to see. His debut collection, the book-length poem Abraham (London ON: Brick Books, 1987), might have opened up some of the threads of what he later expanded upon, but almost as a prequel to the current quartet. Think of Robert Kroetsch’s The Stone Hammer Poems (1975), for example, as a kind of prequel to Completed Field Notes (2000).

His is an eye that works through the geography as a place of origins and colonizers, of original occupants and personal history, and a slew of depictions, events and trauma that run up and down the coastline, from his own family stories of mothers and grandfathers, to mining, archival documents, the removal of totem poles from British Columbia, Emily Carr and Malcolm Lowry on the coast and Gwendolyn MacEwen in Ottawa and the story of Orpheus (Orpheus comes through multiple times, which is interesting), to his translations of early twentieth century poems by Guillaume Apollinaire, Blaise Cendrars and Marcel Thiry that make reference to Vancouver, much of it composed without ever having visited. “At the century’s end,” he writes, in the penultimate prose poem of his “Improvisations 1-12” sequence, “Chief Johnny Muldoe found thirty-five stone clubs at the bottom of a post hole he was digging at Hagwilget Canyon in the ancient salmon village of Tse-Kya. In those days, Queen Vic ruled rock forms on the White Lake Road. In 1938, at summer’s end, in Hagwilget, Kurt Seligmann paid one hundred dollars for a pole from Tse-Kya and shipped it to Paris in two pieces.” And as Apollinaire, through Browne, writes: “There’s a poem to be written about the bird with only one wing / We’ll send it off by telephone / The trauma of it / It makes me weep a little [.]” In a 2007 interview with Peter Grant for Pacific Rim Review of Books, Browne speaks of his engagements with, as he calls it, “historical family geography”:

Colin Browne: If you look at Ground Water and The Shovel, the historical family geography is the inside coast of Vancouver Island, as I came to know it, or as I’ve imagined it. The poem “The Shovel” takes place on the east coast of Vancouver Island, and there’s a long sequence in The Shovel called “Naughts and Crosses.” Each of those little pieces “takes place” on that part of the island, as do sequences in several of the other poems.

The Okanagan is also important. I discovered an affinity—perhaps an ancestral affinity—for the Okanagan through my great-grandfather’s ranch near Kaleden. That’s what my film White Lake is about, in part, the discovery of that very open White Lake grassland landscape that I still write to. That landscape hooks into the Middle East for me.

PG: How important is place?

Colin Browne: Absolutely crucial. Because all that I write takes place in landscapes.

Poetry has become a way to articulate what I actually perceive—to find a way to enter the simultaneity of the world. You’ll see in the poems, especially in The Shovel, that I’m trying to have many events happening simultaneously. I carry different landscapes around in me, as maybe you do, and those landscapes are nudging me all the time. I don’t mind bringing some place near the Dead Sea into something about White Lake. To me they’re both in place in the same place—simply because they’re in me in that way. Is place actually out there? Or is place what you take in and then make?

I’ve also been exploring a way that I can sew, into the narratives, many times and many places simultaneously. What that means is being able to identify the temporal and geographical intersections I’m the sum of; intersections, by the way, that continue to accumulate, voluntarily and involuntarily, and which are inseparable from language. “Identifying” is a word that James Reaney used in the late 60s. He called poets “identifiers.”

Here is structured in seven poem-sections—“Diorama,” “The Azure Notebook,” “Vancouver in Translation,” “Traveller,” “Improvisations 1-12,” “Petal” and “Envoi”—composing a distinct variation on the book length serial poem, one that moves through structures similar to those of George Bowering, Stephen Collis and Jack Spicer, as well as elements of ‘improvisation,’ akin to works by William Carlos Williams, Fred Wah, Dennis Cooley or bpNichol. His blend of serial and improvisation also has links to the documentary poem, a term originally proposed by Dorothy Livesay, writing out a dense and physical collage of structures, approaches and ideas to write a geography laden with history, rich with image and texture, and a new perspective on a variety of colonial histories. It is only through acknowledgment and unpacking those historical events that one can even begin to move forward.

i tug at words like a feral dog
my subject is only incidentally poetry
utopia, i never loved you
except for those triumphant chords, that anthem!
i’ll report that my grandfather’s respite
was brutally brief
my mother learned to keep her distance
bewildered

Marjerie and Malcolm in their shack
on the Inlet
young poets tracked them down
sharpen the knife, they learned
before going at the bologna

do you see the armature? (“In His Fine Hand,” “Traveller”)

Posted by rob mclennan at 8:31 AM
Labels: Colin Browne, Talonbooks