While a white man waits for me to answer he is searching his inner Wikipedia for a fact or a current event about the island or continent I am. Carnival, genocide, pirates, cruise lines, a woman he used to work with, blood diamonds on the soles of her shoes, a-wa a-wa. The list could be longer. He knows a lot about where I am from whether I am from there or not. (“WHERE ARE YOU REALLY FROM”)

In Vancouver poet and fiction writer (and multiple award-winner) Ian Williams’ fifth trade book and third poetry title—after You Know Who You Are (Hamilton ON: Wolsak and Wynn, 2010) and Personals (Calgary AB: Freehand Books, 2012)—is Word Problems (Toronto ON: Coach House Books, 2020), he manages to explore a series of impossible and ineffable questions through the context of the grade school “word problem” with incredible tension, compassion and intelligence. There’s an enormous amount of play going on in these poems, the kind of “serious play” that the late Toronto poet bpNichol also strived for, allowing language and word-play combined with potentially weighty subject matter. Williams’ play includes swirling visuals and a twist on the classic grade-school “word problems,” including a back-cover “Answer Key,” that begins: “Capitalize Black. Please correct your pronunciation. / Don’t nobody love you, playa. / The world is not a schoolbook math problem. Solve for y. / Keep your hands off people.”

Holly is first in the program to welcome members of government. She has forgotten the names of the land on which she is living. As the caregiver of a father with dementia, she recognizes this lapse as satisfying one of the diagnostic questions. She checks. She knows what month it is. She can recall the name of the Prime Minister. She used to live in Vancouver. Now Squamish, Musqueam, and three syllables. Who in the room will behead her online? (“WORD PROBLEMS”) 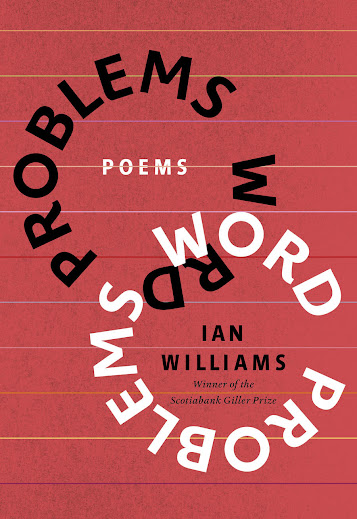 Williams sets his attentions on the limitations of language even as he manages to expand their possibilities, writing out the ways in which language and people often take time to catch up to new ideas, and how difficult some of those navigations can be. Too often, progress is hindered by outdated considerations that dig in their heels, and through Word Problems, Williams approaches complicated and uncomfortable issues of language, race, inequity, poverty and class issues via word games, reveling in wordplay and visual flourish to articulate serious questions. “You believe bicycles / will save mankind.” he writes, in “ICEBERG,” “You’d find a more gender-sensitive / word for mankind. You are kind. Not one of a – one of a / genus maybe but not – kind. I know three evenings / of you. Everything else I had to make up in the night / so they wouldn’t steal your body. For instance / or is it for example your parents rolled you from / their flippers then when you hatched your father spit / milk you’re your tiny beak.” Utilizing crossword puzzles and theory, visual poems and blind spots and microaggressions, he wants you to pay attention better than you have been. He wants you to do something with that attention. Are you?
Posted by rob mclennan at 8:31 AM
Labels: Coach House Books, Ian Williams