I was only pretending
to be ephiphanic
she said, tossing the whole
day over the embankment
Is the heart collandered
or semiprecious
filled with holes
and therefore filled with light
This is just the sort of thing
that cannot be said upon a chair
Unless that chair is spotlit
and wolverine. Can furniture
be wolverine? No, because wolverine
is a noun. (Julia Bloch) 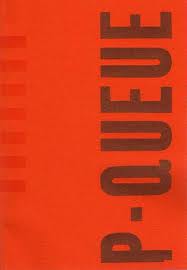 From the depths of SUNY Buffalo come two more volumes of the annual P-QUEUE, their seventh (2010) and eighth (2011), respectively. Given the stunning work in previous volumes of P-QUEUE, I’m disappointed, although not surprised, to hear that these two are the only remaining volumes in print. How many do they make of each, I wonder? With the first three volumes edited by Sarah Campbell, volume 7 is the last of four volumes edited by Andrew Rippeon, subtitled “Polemic,” and features the work of Rich Owens, Craig Dworkin, Julia Bloch, Janet Neigh, Jimbo Blachly and Lyttle Shaw, Duriel E. Harris, Dawn Lundy Martin, Ronaldo V. Wilson, Steve Zultanski, Bhanu Kapil, Robert Fitterman, Patrick F. Durgin, Alessandro Porco, Craig Santos Perez, Vanessa Place and Sarah Dowling. What I’ve always appreciated about this journal has been the construction of each issue as a whole unit, as opposed to a gathering of pieces that don’t necessarily hold as tight together, however impressive the work might be. Sylvia Legris, for example, managed such a feat throughout her run editing Grain magazine. Reminiscent, somewhat, of the recent “Manifestos Now!” issue of The Capilano Review (3.13 / Winter 2011) [see my review of such here], editor Andrew Rippeon writes to end his “Editor’s Note”:

If Angers and Tacoma teach anything to vanguard artists (and it’s a travesty to even consider that they might), it is that neither exceptional individual experience nor movement solidarity exceeds that appetite. The first white wall of the village / Rises through fruit-frees… In our clamor to be among or name the object of that first, we wager the timbre of difference for our moment of arrival. The boots of the men clump / On the boards of the bridge… Does the collapse now so thoroughly permeate the air shared by collective and individual that we fail to recognize its event as only a symptom of itself? Like poetry after Auschwitz, French bridges and American stereos are crossed and sold, and continue to be apace. What barbarism there is exists not within the single poem, pedestrian, or audio component, but rather in the appetite that finds them interchangeable in what they offer. Confronted by the equal consequence of united front and individual mind, it is incumbent upon us neither to resist as a bloc nor to assert the value of the individual, but to develop practices that perpetuate the mutual unintelligibility of these structures such that neither reduces to the other. Hence, polemic. This is old song / That will not declare itself…

There are some fantastic poems in this issue, from Julia Bloch to Rich Owens to some Sarah Dowling gems, visually reminiscent of some of the work of American ex-pat poet Edward Smallfield and Toronto poet Jay MillAr. In his essay, “Polemic for P-Queue,” Steve Zultanski moves through an exploration and argument for proper criticism, as well as a scathing rebuke, and begins with the question “What is poetic about Conceptual Poetry?” He writes:

A common critique of conceptual poems is that they are totalizing gestures. This complaint is directed, most often, toward the works of Kenneth Goldsmith. Without naming names (unworthy adversaries don’t deserve names), the critique goes something like this: Goldsmith’s books are big, and they “reproduce” a masculine need to index the world, to include everything within its rational purview. Thus, it is implied (or directly suggested) that a properly feminine (or at least non-masculinist) poetics would be fragmented, poly-vocal, incomplete, etc. See: Kristeva, etc. See: sloppy readings of Derrida, etc.
What this argument fails to account for is the appearance of the incomplete, as such. For Conceptual Poetry, the incompleteness of the text (what we’ve referred to as the non-identity of concept and realization, or, the poetic element) can only appear in the apparent completeness of the project. Because the text is only apparently complete, its incompleteness is ever the more apparent in a given reading. The appearance of incompleteness in this form makes sense not only theoretically, but historically—insofar as Conceptual Poetry marks an intervention into the practice of poetry.

Dear Holly,
What has stimulated our collaborative process in this volume has been the occasion to shed fidelities to a previous design scheme, without sacrificing the appearance of formal continuity. For this journal, which we are carrying forward after Andrew Rippeon’s illustrious run as editor, to share more than just its name with the previous editions, it was necessary for us to treat its architectonics as a pre-existing structure. Since the decisions behind this exterior pattern were not our own, we were free to follow them without necessity. Instead, in choosing to engage with the arbitrary details and constraints of a preformed template, we were able to arrive at a designed ambivalence. Therefore, it is in the splendor of contradiction that this phrase enlists that I want to inaugurate this volume of P-Queue.

Sectioned into quarters, the section headers run from “A” to “AN” to “AND” and “THE,” stretching the document on the document, citing essential connector words between the sections as much as titling them. When I first became aware of P-QUEUE some years ago, part of the appeal as a reader and potential contributor both (I have work included in a long-previous issue; try to figure out which one) was their eye for works that didn’t fit anywhere else, and this issue runs a range of styles, from a sharp-eyed visual sequence by Andrew Topel, a selection of related works by CAConrad, and an excerpt of a longer poem-essay by Jena Osman, “The Beautiful Life of Persona Ficta,” that begins with a quote by Muriel Ruykeyser, “A corporation is a body without a soul.” How could she have known, so many decades back?

scientific selection of the workman
an assembly line cog:
I realize I’ve pictured the cog incorrectly—
as a spoke—
when in fact it’s just one tooth of a gear
a small part that requires interlocking with another
I spoke a small part without teeth
14th: All persons born or naturalized in the United States, and subject to the jurisdiction thereof, are citizens of the United States and of the State wherein they reside. No State small make or enforce any law which shall abridge the privileges or immunities of citizens of the United States; nor shall any State deprive any person of life, liberty, or property, without due process of law; nor deny to any person within its jurisdiction the equal protection of the laws.
This Amendment, adopted to end slavery once and for all in 1868, subsequently employed to protect an artificial person in 1886. In Santa Clara County v. Southern Pacific Railroad there is no written opinion granting corporations 14th Amendment rights; was it simply the slip of an errant court reporter?
The human body a machine that winds its own springs.