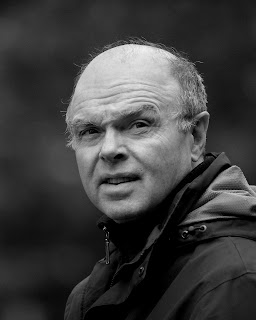 Tim Lilburn has published eight books of poetry. A new collection, Assiniboia, will appear this spring. He teaches at the University of Victoria.

1 - How did your first book change your life? How does your most recent work compare to your previous? How does it feel different?  That first book, seeing it published, was amazing. Ron Smith at Oolichan had done a great job. I loved everything about it from a design point of view, the cover, the paper. All books since have been special in their own ways; all make me anxious, expectant. Something is closing down, a preoccupation spanning five or more years, an emptiness is following, maybe something new coming in. The look of my new book, Assiniboia, out this spring, I find quite striking, the cover, the arrangement on the inside. Erin Cooper at M&S did the whole design, inside and out – her work amplifies in a powerful way what the text is doing. She saw something in the poems and drew it into visual language.

2 - How did you come to poetry first, as opposed to, say, fiction or non-fiction? As far as I can remember, I started writing quite bad poetry when I was very young, composing it as I walked a paper route. I liked how words could link together musically and carry the punch of emotion. Much, much later, I started writing essays, mostly to get outside of poems to talk in a broader way about what the poems were saying. So now essays and poetry are complimentary texts for me, and both are, in part, vehicles of philosophy, and both are, in part, religious devices or exercises. But this could make things sound a little stiffer, more intentioned, than they really are – I mostly just sniff around.

3 - How long does it take to start any particular writing project? Does your writing initially come quickly, or is it a slow process? Do first drafts appear looking close to their final shape, or does your work come out of copious notes?  The book I am finishing now was my main focus for five years. It built up slowly, but I knew from the outset that I wanted it to be a long performable, choreographable (a word?) poem for many voices, some of which would belong to Sara Riel, Louis Riel and various landforms that have the power of speech. I’ve been working with Robin Poitras at New Dance Horizons in Regina on a performance of a part of the central long poem, and I see this as a necessary extension of the book. We plan to stage a version shortly after Assiniboia is released, a sort of danced opera of chant. I love collaboration with artists in other mediums, and Robin is a truly brilliant creator.

4 - Where does a poem usually begin for you? Are you an author of short pieces that end up combining into a larger project, or are you working on a "book" from the very beginning?  It may sound, from the previous response, that I imagine myself working on a book from the outset, but really I write from single lines, or phrases or just nouns, or simply a particular rhythm that has gotten into my head. The whole shape of the thing becomes clear as I move along. But with Assiniboia I had these hunches from the beginning. I wanted to imagine an alternate western Canada, not resource exploiting, not homogeneous, not petro-state-ish. I just didn’t know how to get there. But I recognized, as anyone would, that if you are serious about pursuing such a vision, you simply must go through the political imagination of Riel and his two Provisional Governments.

5 - Are public readings part of or counter to your creative process? Are you the sort of writer who enjoys doing readings? I do rather like them. I like how a poem or stretch of poems can show what they are doing as you perform them. Reading is a way of hearing the music of the work more acutely.

6 - Do you have any theoretical concerns behind your writing? What kinds of questions are you trying to answer with your work? What do you even think the current questions are?  For many years, a central concern in all my work has centered on autochthonicity, that is, how is it possible for descendants of settlers, for denizens of the ethos of uprooting, anarchic capitalism to be at home where they are? This isn’t a theoretical problem for me, but a personal one – how to form a vivifying link with the land where one is? It’s an affective problem, an erotic question. It is also a question that touches on identity and one’s sense of meaning. Without this link, all sorts of loneliness and violence is possible. This isn’t or shouldn’t be news to anyone.

8 - Do you find the process of working with an outside editor difficult or essential (or both)?  Both, I’d say. It’s great to be heard deeply. My editor with the new book was Ken Babstock, an exquisite, sharp reader.

9 - What is the best piece of advice you've heard (not necessarily given to you directly)?  Can’t think of the best. Just watching some people work from a distance or close up has been an education and an inspiration. Tomaz Salamun, Jan Zwicky, Don Domanski, book after book, these long forays into whatever draws them.

10 - How easy has it been for you to move between genres (poetry to non-fiction)? What do you see as the appeal?  I’m usually relieved as I move from one sort of project, an essay, a review, back to poetry or vice versa. The shifting brings lightness in. I’m working with different sets of muscles.

11 - What kind of writing routine do you tend to keep, or do you even have one? How does a typical day (for you) begin?  I like to get up quite early and get to the shed where I work in the back of the property as soon as possible. By mid to late morning a certain beachhead has (or not) been achieved. Then walking, reading, talking if I can find someone to share a beer or coffee with.

12 - When your writing gets stalled, where do you turn or return for (for lack of a better word) inspiration?  Lately I’ve turned to Gershon Scholem’s Major Trends in Jewish Mysticism when I find myself in a state like this (I go to this book for many other reasons besides). I’ve been thinking recently of returning to Ray Monk’s extraordinary biography of Wittgenstein and moving through that again. For poetry, Lowell, Geoffrey Hill, Brenda Hillman, Xi Chuan and a few others.

13 - What fragrance reminds you of home?  I have had two homes for several years, Saskatchewan and Vancouver Island. For the Island, the smell of a winter forest – snowberries, douglas fir. Saskatchewan: dry native grass. Dirt.

14 - David W. McFadden once said that books come from books, but are there any other forms that influence your work, whether nature, music, science or visual art?  I read randomly in science (archeology, neurology, cosmology; a friend who’s a microbiologist has set me on to various things), but I know in fact next to nothing in any of these areas. Mystical theology, neo-platonism – an important book for me over the last few years has been Henry Corbin’s Creative Imagination in the Sufism of Ibn ‘Arabi. My partner is a curator, and I go to many art openings. I have found, from a compositional point of view, I have learned more from visual artists – Janet Werner, Rebecca Belmore, Rick Raxlen, Grant McConnell, Jan Wyers – than I have from poets. If they can make this elision on canvas or in the performance space, why can’t I do something comparable on the page?

15 - What other writers or writings are important for your work, or simply your life outside of your work?  I guess I’ve taken a stab at this question above. The work of Jan Zwicky remains important to me. Osip Mandelstam. Andrew Sukanski, as you know, has been saying things to me for over thirty years. Many, many others.

16 - What would you like to do that you haven't yet done?  Can’t say. Things just turn up. I wouldn’t mind writing an opera, I guess, or at least a more conventional one than the masque/opera for chant in Assiniboia. I am attracted to spectacle. Orghast, R. Murray Schafer. But, no, no particular ambition. Just whatever presents itself. This is part of the thrill, not knowing.

17 - If you could pick any other occupation to attempt, what would it be? Or, alternately, what do you think you would have ended up doing had you not been a writer?  I used to work as a farm labourer, and I kind of miss that. There were parts of religious life I liked. But teaching and writing, walking, looking, waiting, conversation when I can scare it up seem to be the best for me.

18 - What made you write, as opposed to doing something else?  Hard to say, really. It wasn’t a choice. It was just something urging, insistent inside.

20 - What are you currently working on? Now that Assiniboia is finished as far as I am concerned, I’m turning my full attention to two projects, an essay collection that I’d like to call The Larger Conversation, politics, contemplation and so forth, that would go with Going Home and Living in the World As If It Were Home. I’m also deeply engaged with some new poems, more autobiographical, shorter, exploring parts of my past I’ve put off thinking a great deal about. And also I’m quite intrigued by the phenomenon of the mythopoeic war.