We asked the world if it was alive. “Oh,” the walls said, “we aren’t religious, but we are spiritual.” We thought we must be hallucinating, but then the wine rumbled in our stomachs, our lamp reached back to Persia, and the bath tried to drown us. “Once the world turns on, good luck turning it off,” said the drugs in our palm. “Plug your ears,” the future said, “hold your hands in front of the screen, close the ancient texts, none of it will help. Good luck.” (Liam Siemens) 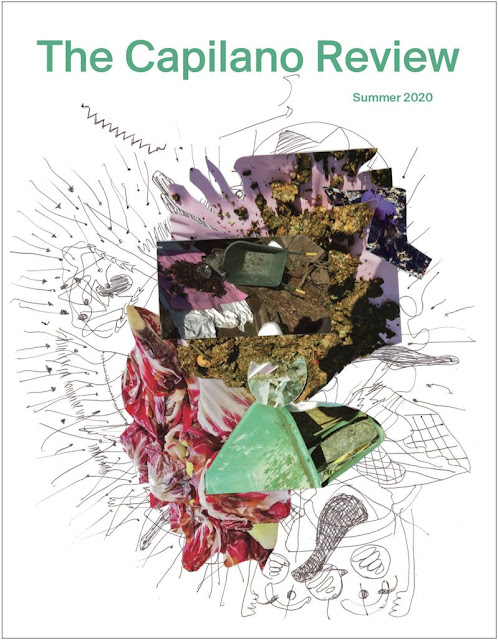 I spent a week away from my desk, which allowed me to catch up on a bit of my journal reading, including going through The Capilano Review 3.41 (Summer 2020). I’m always interested to see what The Capilano Review has going on, and this issue is their “open issue,” featuring multiple works of poetry, prose, artwork and interviews. As Matea Kulić offers in her “Editor’s Note” on this issue’s themeless theme: “We soon noted, however, even admits pieces we had initially considered light or humorous in tone, a shadow side—an uncanny edge, a surrealist blow. Mourning, both individual and collective, emerged as a major theme. While inevitably ‘there is this holding on’ (Andrea Actis), the contributors to this issue consider how one form of life must be grieved for another to grow. As Andrea Javor aka Mystic Sandwich writes, it ‘isn’t the end of the world; it’s the end of a world.’”

Ottawa poet Conyer Clayton and Toronto poet (formerly Ottawa, where he was part of In/Words Magazine and Press) Bardia Sinaee co-won the 2019 Robin Blaser Poetry Prize and both have poems included in this issue. When Conyer is good, she is very good: “A crowd is a sharp cut in the rocks. / What came in on the air this morning? / Dung and past lives. Rejected // pollen, poor seeds, such statistics / for life, and we don’t even know how / water is drawn up.” (“Habitual”). I am very curious to see Sinaee’s full-length debut, Intruder, which is scheduled for spring 2021 with House of Anansi Press. “It was the summer of whippits and ketamine,” he writes, to close the third of his four poems in the issue, “Cadillac,” “Every other guy had a Goku tattoo // but only I could ride around on a cloud / because I was pure of heart [.]”

Otherwise, much of the work that jumped out of me from this issue were prose poems. For example, I’m gratified to see new work by former editor Andrea Actis, along with the discovery in her bio that she has a debut poetry collection out next spring from Brick Books. Having only seen bits and pieces of her work over the years, I am eager to see what this debut might hold. Her extended prose sequence, “Soul Ash,” is quite magnificent, and begins:

And you know you get everybody you want in there. And you can keep it and spread it. Yet I feel that somehow this might be just having no material parts of them. Like a really smart person making the argument for her. So then that’s blinded by his belief that it is soul to these people? So very. Dispersed. But what sense slews why soul might simply be what I remember of someone and love of them? I remind her why my love no I don’t have investments I’m looking to protect them.

Another highlight had to be the shorter prose sequence “DEEPING YELLOWS,” a piece by Sheung-King (an author with a novel out in October with Book*hug) that remained with me for longer than I had expected. The turns in the piece are quite compelling. As the piece begins:

I light a joint, which is illegal. Getting high in the shower with me is a bucket. The bucket is upside down. My phone is playing the song Yellow Magic (1978). Warm water from the shower lands on the back of my neck, runs down my chest, and drips from the tip of my penis onto the bucket, making an empty sound. Years later, I hear the same sound in the documentary Ryuichi Sakamoto: Coda (2017). In one scene, Sakamoto is seen standing in the rain holding a bucket over his head and listening to the sound of the rain landing on the bucket. His bucket is blue. Mine is yellow.

Montreal writer Gail Scott is interviewed at length by Vancouver writer Meredith Quartermain, an interview conducted at the Quartermains during a reading tour Scott was doing last fall. The interview, centred around a newly-published revised edition of Heroine moves into some interesting territory, including tying Scott’s work and attention to more contemporary engagements, from Robert Glück and San Francisco’s New Narrative, Christine Buci-Glucksmann, Richard Wagamese, Jordan Abel and Liz Howard, and Sheila Heti’s How Should A Person Be?. The interview closes:

MQ: You’ve mentioned that avant-garde practice has risen up and fallen back at various points in the twentieth century. Can you talk a little more about that?

GS: The avant-garde reappears cyclically, in conjunction with other factors. Often you hear people referring to the notion of avant-garde as dead or passé. I agree that the term is problematic, but it is useful for demonstrating that the emergence of radical poets, those whose sense of urgency is forcément in relation to the socio-political situation of a given era, is inevitable. The avant-garde emerges in company with radical social movements that, themselves, advance and recede. Its lessons are eventually partially absorbed, as are those of social contestation. I started writing in a period of significant social change that spawned artists and writers looking for new modes of expression. In art and politics, there is reform and revolution. The former is well-meaning, liberal, and not prepared to give up profiting from power structures such as capitalism and racism. Then there are movements, and they often come from justice-seeking minority groups, that understand huge upheaval is required for there to be real, systematic change. I believe we have come back to that time again, and with it a new generation of artists, a new sense of urgency.

And did you know that there’s a new biography of Robin Blaser? I’m still trying to get my hands on a copy, but Jami Macarty reviews it, at the end of this issue: A Literary Biography of Robin Blaser: Mechanic of Splendor, by Miriam Nichols (Palgrave, 2019). As she offers: “Nichol’s biography vitalizes Blaser, the poet, and his poetry, while also offering particulars of his life in his words, such as the first time he opened ‘the door to a mysterious man with a mustache, dark glasses, a trench coat, sandals, his feet painted purple for some incredible reason.’ That ‘mysterious man’: Jack Spicer. When Blaser and Stan Persky broke up, Blaser complained that Persky ‘took the curtains.’ Nichols also shares particulars from her personal history as Blaser’s student, colleague, and friend, such as ‘Blaser’s preferred white’—Chablis, and his penchant for shopping—‘he found a pink jacket that became a favorite.’ All the while, Nichols stays wholly true to her intention to offer a literary biography, pairing Blaser’s ‘distinctive discourse of poetry’ with her distinctive discourse of biography.”