Benjamin Garcia, Thrown in the Throat

Selected by Kazim Ali as winner of the 2019 National Poetry Series is Benjamin Garcia’s stunning full-length debut, Thrown in the Throat (Milkweed Editions, 2020), a collection that swaggers, sweats and sings through a first-person lyric that explores the politics of identity, from sexuality to that of the immigrant, challenging the role and the question of who exactly is the outsider. Their poems are refined and emotionally open, occasionally wildly so. As they write as part of the poem “Self-Portrait as a Man-Made Diamond,” “because there is nothing for me / in immortality’s tundra // to even chip my teeth on. I couldn’t / live that way now, much less // after. Composure / and bling have never been // my thing.” Garcia’s is a lyric that both questions and declares, interrogates and makes known that they, as immigrant and queer, are the point from which all else is other.

Their are shifts that emerge from attention as much as perspective, and their lyrics are constructed out of empathy, understanding and a deep attention, such as the incredibly powerful “Reasons for Abolishing Ice,” a poem that manages multiple references, threads and complex ideas in a comparatively straightforward and emotionally devastating manner. The poem begins: 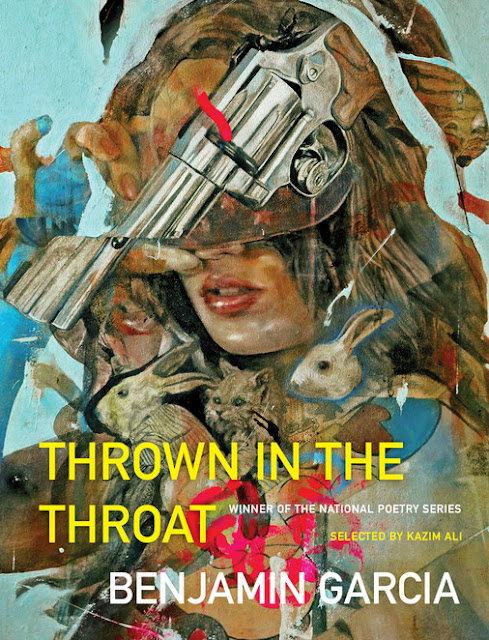 How does a poet manage to accomplish so much so quickly? I’m rather amazed at the strength of this debut by such a witty, smart and sly poet I haven’t encountered the work of, prior to this. In an interview with Garcia posted July 1, 2020 at Foglifter, conducted by Dan Lau, Lau responds:

It’s interesting. Thrown in the Throat moves through so many different intersectional topics. It’s particularly queer. It takes many positions and interrogates alterity in different ways. Yeah so I just wanted to frame the beginning of our conversation with the book’s threshold, the entrance poem. You’ve set up the intention to situate the reader in the context of an interrogation by considering what this language in question is. You go on to translate the language in question into other poems in this book placing the reader in the perspective of Latinx folk, the undocumented, the queer, the colonized, the erased or the ones that are in the middle of being erased right now. How can you help us make sense of all these languages in question for us?

BG: I think that the book as a whole is trying to pinpoint exactly what that “language in question” is, which keeps shifting throughout the book. The language in question series is trying to grab at the shiftiness of language as an idea. Whether that language has to do with “how do I, as somebody who has inherited a colonized history, work within English and Spanish? Finding things that are beautiful in it but at the same time things that are terrible. Finding a way of going forward with that, of not excusing it. Acknowledging it, but also making something new.

Or whether it’s our interpersonal use of the “language in question.” It’s how we interact with our loved ones. The ways that we may hurt each other without intending to or even the ways in which we police each other with what language we use within poetry. What’s acceptable and what’s considered beautiful in poetry? What has been left out and what are those factors? Who decides what language is appropriate and what’s not? So, I think the “language in question” poems are constantly searching—and, in some ways, they don’t give up searching. They don’t arrive at an answer. It’s more about questioning that language. It’s like that language has been used in criminal ways. So, like, by colonizers but also by people speaking English as an adopted language. How people from communities with accents or who don’t speak “properly” sometimes get treated like the way they use language is criminal. There are a few different ways in which I try to explore these overlapping issues.