Did I mention I’m working on a novel? 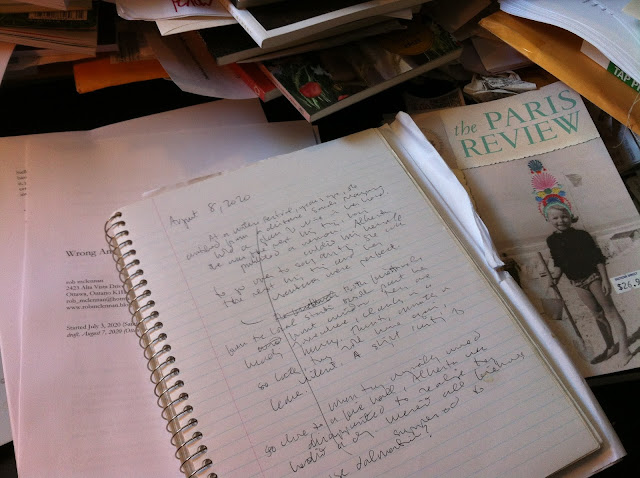 Admittedly, it’s a ridiculous thing to admit, so early on. Perhaps it is moreso now, given so many I know aren’t able to get any work done at all, or the possibility that much of my work will come to a halt once we officially begin with homeschooling, come September. This could all be summer love I don’t even think about again, until spring.

I know certain writers who refuse to discuss works-in-progress at all, concerned they might jinx it. Concerned that the thinking about a work-in-progress should be within the confines of the work, and not aloud to anyone else. To speak aloud would be to lose it. I’ve always found that to speak aloud provides an opportunity that doesn’t always emerge through the exclusive process of note-taking, editing or typing. The same comes from being well-interviewed: the potential emergence of a fresh perspective. Besides, what else are grant applications?

As well: knowing that others are aware I’m working on something is part of the push to keep working on it. How is that novel coming?

I have always been attracted to the novel as accumulation. From the vantage point of my twenties, when I was writing daily, and attempting to either start or complete three new poems per week, the idea of writing a full-length novel always intimidated. I had somehow imagined it as a single, unbroken and seemingly impossible task. It took me a decade or so to realize that what had been delaying my fiction writing was missing out on the sense of accomplishment I would garner at the completion of a single poem. Poem, poem, poem. It took a long time to realize that the novel doesn’t necessarily work that way. Lacking that little burst of satisfaction one gets from the completion of a single poem, say, doesn’t mean that the writing isn’t progressing, or even progressing well. I had to reshape the way I thought about the process, and my expectations around daily work. I had to keep going.

I think it was when I considered the structure of Richard Brautigan novels that first allowed me the idea of novels-as-accumulation. Trout Fishing in America is as much a gathering of short stories as it might be a novel: a gathering of short prose bursts, one after another. Really, any of his books are composed as an accumulation of short, self-contained sections. I could do that, couldn’t I? Since then, I’ve noticed numerous writers do versions of the same, which seem far different than working to sustain any longer, sustained narratives. Alternately, so much fiction feels cinematic, and that doesn’t appeal to me in the same way. I prefer the short lyric, the bursts of prose and musical language across pages. I think of books by Sarah Manguso, Ken Sparling, Nicole Brossard, Jean McKay, Diane Schoemperlen and Dany Laferrière: writers who have become influences upon my own work; writers who have become some of my favourite to read and reread. There are others, of course, but these are the examples that spring to immediate mind.

The ways in which I have approached fiction since the 1990s hasn’t changed that much. That first mid-1990s attempt was entirely collage, short prose bursts that layered upon each other, and at least one editor kindly read and commented upon as part of rejection. The books that ended up being published—white (Mercury, 2007) and Missing Persons (2009)—were also composed as accumulation. Most of the sections of white included less than half a page of text, and the pages accumulated until they reached a kind of ending, a kind of conclusion. By comparison, the longer sections of Missing Persons—two or three pages per instead of half a page—were my attempts to compose longer scenes, although I became aware that each scene I was writing was defined by an action that never sat in the frame. The stories in my as-yet-unpublished “On Beauty,” short stories each three or four pages in length, work as a sequence of short bursts that interplay, interact and accumulate. The narrative emerges through how each short section builds to the ending. This was during the days of Mad Men, a show that always sent me further into fiction writing after every new episode: you did not have to show the cause to be able to explore the effects. The effects, and even the build-up, were far more interesting.

I am working on what I hope might evolve into a novel, attempting multiple threads, to see where they go. I pull at threads from earlier works, from the short stories to the novels. Might this book connect properly with those previous works? As of yet, the pages don’t yet cohere, but these are early days. They don’t really have to. This is only a beginning.

And here, three untethered fragments of this early-days work-in-progress:

Patience knows that pain is no contract. She refuses it access. Felix had long claimed she was difficult to read. It took years for him to decipher the shifts in her mood: what they meant, and how he might navigate. She radiated stillness. Not a sense of calm, per se, but something quiet, unmoved. Still water runs, deep. A still surface that could, when required, allow something else to burst through from below. Stillness, and depth. As some know, this is where monsters lay.

Who will read the fall of this one leaf.

When their trio landed, there, in the new house, the first task she set herself was to resuscitate the flowerbeds, a moat of dead, empty soil surrounding the boundary of the house and the unfenced yard. Within the outline of where the barn once lay, she negotiated a vegetable garden. She broke through the earth, pulled scraps of metal, tin and wood, the occasional remnant of concrete floor. She discovered the old well, behind where the barn once stood. Turning in bags of fresh dirt, she planted an arrangement of perennials. The old farmhouse nestled among elm and maple, with scrapes of empty patches of grass and hard-packed earth. She would remake what had lain fallow. She would, in this small space at least, be a bringer of life.

Patience, her morning tea on the porch. It has been dry, lately. Her garden wilts. She will water it soon, before the day further unfolds. It has been too hot, lately.

Already the dry air curtain-thick against the bare skin of her arms, of her legs. What she brushes away with her skirt, the flush of her dress. The flies buzz, along.

With her tea, on the morning porch, Patience ponders the passage of time. Sting sang “A thousand rainy days since we first met,” which could only happen in England. Out here, that kind of measuring stick would mean something different. It could be a whole lifetime.

The tree that killed Felix was a forty-foot maple, struck by lightning. The tree sat in a grove at the former properly line. After Peter’s father purchased the lands around the house next door, he allowed the fenceline between the two properties to wither. Fifty years later, his father, at ninety-two, still knew every line, stump and stone. He could walk through these acres blindfolded, he said, although this has never been challenged. The storm struck the tree in half, yet both halves held their ground. Peter knew it was only a matter of time before the tree fell, and thought it prudent to speed up the process. His girls played out there, after all. They sat on the large stone on the former property line and told stories. They named it their clubhouse. He wanted the tree safely down, and would cut it for the stacks in his woodshed. To feed the furnace, come winter. To feed the stove in the machine shop.

As the tree landed, it also killed a mother raccoon, leaving two kits. Peter only discovered this later, when he went back to clean up the site and retrieve the wood. He brought the two kits back to the house, too small to be left on their own. His wife, Charlotte, pulled baby bottles out from the back of a cupboard, attempted to wean them with raw cow’s milk. Their two girls, five and seven years old, bottle feeding baby raccoons in the yard, set in the barn in a nest he has built them. Built out of straw. They squeak and chirp as the kits see him coming. Felix is dead, and now all he has are these two small raccoons. These kits and the firewood. His heart heavy as stone.

A rock is an object. A stone is a tool. What might he do with it.

Posted by rob mclennan at 8:31 AM
Labels: fiction, patreon, work-in-progress, Wrong Answers Only