So much has been said that has spoken to all of us, about Kevin as a writer, about Kevin as a supporter of so many writers and artists, about Kevin’s gift for making us all feel like we were stars, about Kevin’s incredible relationship with Dodie. Kevin’s inclusion of me into the world of Poets Theater gave me laughter, lasting friendships and joyous moments of being a ham. He taught me that it is ok to laugh at what you love and to love the ridiculous in everything (including one’s self) with depth and heart. In 1994 he wrote the play Flophouse for the tenth anniversary of The Lab. In it we jumped to the future and at the end he wakes to find Dodie telling him it was all a dream. He asks her if he is “more divine than the sun and moon?” She answers that she doesn’t “have an answer to that one. Not yet.” Jump now to the future again and the answer is most clearly yes. All my love to Dodie and to everyone who was blessed to know Kevin Killian. (Michelle Rollman) 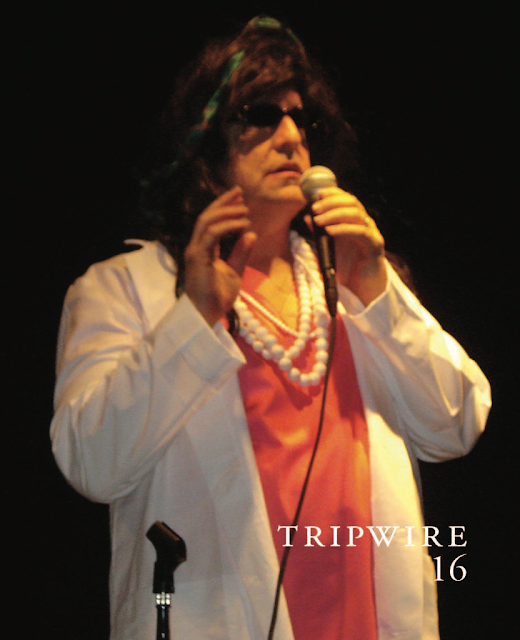 The first element of the new issue of David Buuck’s TRIPWIRE: a journal of poetics I went through was the lengthy “Kevin Killian Tribute,” titled “A Poets Theater Tribute to Kevin Killian,” around the late San Francisco writer, editor and enthusiast Kevin Killian [see my own small tribute to him here]. The feature includes tributes by Eileen Myles, Scott Hewicker, Cliff Hengst, Karla Milosevich, Craig Goodman, Michelle Rollman, Anne McGuire, Wayne Smith, Tanya Hollis, Steve Orth, Lindsey Boldt, Maxe Crandall, Arnold J. Kempt, Carla Harryman, Lee Ann Brown and Tony Torn, Susan Gevirtz, Laynie Browne, Patrick Durgin, Norma Cole and Jo Giardini. “I honestly don’t know what to do with this moment in time when my peers are dying,” Eileen Myles writes, to open her “Don’t Go.” She later on writes: “There was always a youthiness about Kevin Killian. To be young is to be an unabashed fan. He had it as an elder. Kevin had a marvelous instrument for effusing, his changeable expansive reckless grand dame elegant surprising voice sourced from an endless bucket of light from somewhere that scattered love and fun and wit and bitchiness around us all and offered a lawn and a fence to hold us in.” Scott Hewicker begins his tribute writing: “The first play I saw by Kevin Killian was Life after Prince at Kiki Gallery in 1993. It was a beautifully messy spectacle in a cramped gallery full of people. What was exciting about it was its unpredictable mix of amateur flatness and high camp. I’m not sure if they were always fun to sit through, but they sure were a lot of fun to be in.” To introduce the section, editor Buuck writes:

In addition to his work as a poet, novelist, memoirist, biographer, literary organizer, and Top-100 Amazon reviewer (not to mention holding a full-time day job), Kevin Killian made time to write or co-write (and often direct) over 50 Poets Theater plays. Almost always performed as staged readings, with one or two rehearsals, minimal sets and costuming, Kevin’s Poets Theater work demonstrated a commitment to a community-based, non-professional ethos where sociality and shared laughter was as important—if not more so—than how the work may have lived on the page.

At over three hundred pages, there is an enormous amount going on in this issue worth looking at, including an absolutely fascinating interview Michelle N. Huang conducted with Mei-mei Berssenbrugge and Teddy Yoshikami around a writing/dance collaboration the two of them did .As Huang offers as part of her introduction: “I first encountered Mei-mei Berssenbrugge’s work in graduate school, where her poem ‘Fog’ became something of a touchstone for me as I worked through my dissertation on molecular aesthetics and posthumanism in Asian American literature. When I learned the poem was part of a triptych on the transitional states of water—the poem ‘Fog’ preceded by ‘Mizu’ (water) and ‘Alakanak Break-Up’ (ice)—and that all three poems had been created as poetry/dance performances during the early 1980s in collaboration with the Basement Workshop, the foundational Asian American Movement organization in New York, I wanted desperately to see them. My search led me from the Raymond Danowski Poetry Library at Emory (where one of the 80 copies of the artist’s book containing ‘Mizu’ can be found), to uncatalogued boxes at Beinecke, and eventually to the choreographer, Theodora (Teddy) Yoshikami, of Morita Dance Company, who still lives in New York. She had given the VHS tapes to the Asian/Pacific/American Institute at New York University, where they waited in a box, for me (I felt) to find.” This is really is an interesting interview, especially on a project forty-years distant that hasn’t (it would appear) received the acknowledgement, critical or otherwise, that it deserves (should interviewer/critic Huang be considering putting a volume of this text plus a critical introduction together, say, the way Wave Books produced Lorine Niedecker’s Lake Superior?). I would even say that this interview is worth the price of admission alone (I would also say that for the Kevin Killian section, so I’m basically telling you that you would be wise to pick up a copy of this issue). The interview, also, is immediately followed by a stunning four-part poem “YOU ARE HERE” by Berssenbrugge, the first part of such reads:

We’ve powerful analytic tools to simplify an experience, so we can absorb it emotionally.

There’s joy in transmuting a supernova into science and wonder, at the same time.

World’s a net of relations in which appearance is one; to correlate the visible with the personal makes it real.

Seeing, a kind of consciousness, materializes its form.

Then everything constellates out to the farthest star.

The issue also includes numerous other features, from poetry to scripts to a whole slate of book reviews at the end.