The demise of our species
is written in these stones.

There was a revelation when the mines opened,
though the miracle was merely material.

Plunderers dove into the earth
for the spoils of energy. And human life

prepared itself for omnicide,
bathing in the waters of its doom. (“BELOW OKLO”)

Dedicated “to the victims of nuclear weapons, accidents, and mishaps” is Ken Hunt’s latest poetry title, The Manhattan Project (Calgary AB: University of Calgary Press, 2020), following his previous collections Space Administration (2014), The Lost Cosmonauts (Toronto ON: Book*hug, 2018) [see my review of such here] and The Odyssey (Book*hug, 2019) [see my review of such here]. As with his previous works, this new collection continues his thread of poetry titles constructed as explorations and engagements with archival materials around scientific achievement, and advancements large enough that they became cultural touchstones throughout the second half of the twentieth century: the moon landing, the ‘space race,’ and the development of the nuclear bomb that punctuated the end of the Second World War. The collection is named, in case you weren’t aware, after “The Manhattan Project,” the American-led research and development project that developed the first nuclear weapons, culminating in the atomic bombs dropped on Hiroshima and Nagasaki in August, 1945. Hunt stares straight into a darkness fleued by science, one with the ability to equally create and destroy, but one remembered predominantly, not for its genius, but for the terrible legacies of the atomic bomb: the wholescale murder and destruction of two cities and their populations. “Scribes struggle to recount the advent / of doomsday.” he writes, to open the poem “SALTED BOMBS”: “Scavengers scrape radium / from watch dials, extract cesium / from stolen lab samples, raid // factories that manufacture smoke detectors / from their americium, and dismantle / glowing rifle sights for thorium.” Included as the final section of collection is his essay “Fallout,” that opens:

The Manhattan Project draws its theoretical basis, in part, from Joyelle McSweeney’s The Necropastoral: Poetry, Media, Occults. McSweeney characterizes the “necropastoral” as a liminal zone, containing “the manifestation of infectiousness, anxiety, and contagion … present in the hygienic borders of the classical pastoral … [a] location [that] stages strange meetings.” The necropastoral explodes binary distinctions like urban vs. pastoral, or natural vs. manmade. Instead, humans influence, from our pollutants to our reshaping of the environment, and nature’s re-infiltration of previously human-occupied areas constitute a kind of exchange—an osmosis of poisons, pests, roots, and chemicals across various membranes. The concept of the necropastoral urges us to consider the idea that what we think of as “natural” has always already been contaminated by human activities, while also pointing to the pervasive and vengeful infiltration of “natural” forces in so-called “urban” environments. The Manhattan Project explores the aesthetic milieu of the necropastoral in order to revive the tonal and imagistic elements of both the pastoral form and the lyric form and imagistic elements of both the pastoral form and the lyric form for the post-nuclear age. In doing so, the book hopes to show that these forms cannot be resurrected as they once were. Instead, what rises from their lead coffins are far stranger beasts. 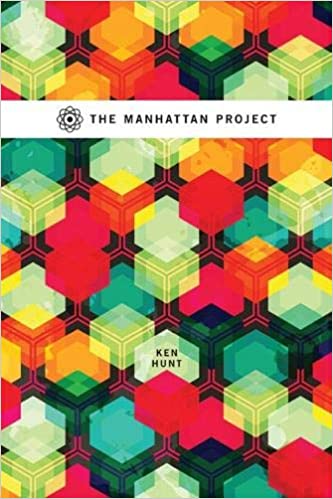 Constructed in sections—“THE ATOMS WE CLEAVE,” “THE ARMS RACE,” “TRINITY,” “GHOSTS OF LOS ALAMOS,” “INDUSTRIAL COMPLEX,” “MILITARY INCIDENTS,” “RAIN OF RUIN,” “CONTAMINATOR,” “DOOMSDAY MACHINES” and “DESTROYERS OF WORLDS,” as well as the essay-coda “FALLOUT”—Hunt’s The Manhattan Project employs visual poems, the lyric and more conceptual frameworks to explore the development of nuclear weapons, working from origins through to the other end of dire consequences. There is something incredibly bold about looking such darkness straight in the eye, even with the distance of decades, and a darkness that isn’t as far removed from the present as one might imagine. Hall writes of “a new species of light” (“TRINITY”) and “An oxidized kris / fused to its sheath.” (“DULL SWORDS”) in a book-length suite that seeks out the light in the blue sky, understanding how deep the darkness, trauma and devastation within actually goes. For example, the three-page poem “TESTIMONY” begins: “There was a flash, a thermal lance of / magnesium. White clouds spread out from / the glare, a morning glory booming / in the sky. There was a blast // of steam. I felt weightless, as if I were an / astronaut.” Further on, the same piece closes:

I could not sit beside the windows because
I had seen so many people wounded by
pieces of glass. I sat with the wall behind me
for ten years.

Posted by rob mclennan at 8:31 AM
Labels: Ken Hunt, University of Calgary Press