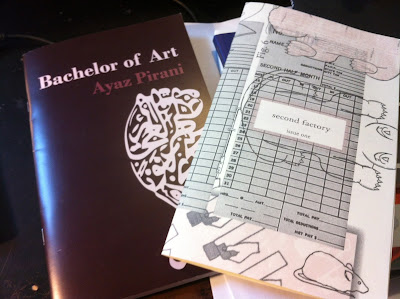 What is happening? Don’t forget to look at periodicities: a journal of poetry and poetics for a slew of new content this month, as well as various new interviews at Touch the Donkey following the recent release of issue twenty-six. And the ottawa small press fair might not be happening at all this year, but make sure you check out the home edition interviews with a variety of past (and future) exhibitors. Oh, and the Black Lives Matter : above/ground press chapbook give-away is still happening. What else? Did you know that above/ground press has produced more than thirty chapbooks so far this year, as well as issues of The Peter F. Yacht Club, G U E S T [a journal of guest editors] and Touch the Donkey? And look at Michael Sikkema’scall for submission for his issue of G U E S T, by the by. I’ll be announcing 2021 subscriptions for above/ground press in the fall, but be aware that I’ve backdated at least two 2020 subscriptions over the past week or so.

And wash your hands! And be safe where you are!

The second factory is never definitive. It is spotted like a bird in the wild. A friend sticks their head in the door screaming. I’ve put a grape in the risograph! Everyone nods in approval.

Everything is heightened, and nothing stays the same. One night we celebrate, the next we squabble among the rinds and the cigarette butts, arguing over how to pay rent.

Contradictory reports have started to come in warning of yet another factory, a third factory, looming in the distance. Some describe an office park; others a shed. Huge troughs of water, nets in the trees. We are in no hurry to do. We will remain the second factory while we are able.

I wonder if they know of Steve Evan’s website, Third Factory: Notes to Poetry? Either way, it is good to see new work from Tony Iantosca (“I have a name / that identifies me / to others and keeps / track of my movements / in a conversation / I can’t hear, / that anchors me / in documents / stamped and moved / into a drawer.” “Other Brain”), as well as two new poems by Genevieve Kaplan; her poems in the issue are dense lyric meditations, the second of which, “Or [to only have meant: look],” opens with:

And there was war.
And some of it was personal.
Despite attempts, most of it could not be undone.
As there was hurt.
And some of these may have thought, may not have been able to see
the way out, or the way that a done action could be undone, redone,
or successfully reframed.
As though it was a need to seek out texts.

The lack of author biographies in any publication usually annoys the hell out of me, but there’s something so uncomplicated and graceful about this small publication that I think I might consider the lack of such to be entirely appropriate. I like the poem “The Visitation” by Kelly Hoffer, that includes the lovely opening “my mother    sitting at a table opening / bread    her fingers moving with a bitter / hiccup,” or the two poems by Yuko Otomo. There is a lot worth reading in this small publication, far more than worth the price of admission.

Toronto ON: I’m finally going through my copy of Ayaz Pirani’s chapbook Bachelor of Art (Toronto ON: Anstruther Press, 2020). Currently based in California after time spent studying in Toronto and Montreal, Pirani is the author of multiple poetry titles, including Happy You Are Here (The Word Works, 2016) and Kabir’s Jacket Has a Thousand Pockets (Mawenzi House, 2019), yet this is the first I’ve encountered of his works. Through the eleven poems included in Bachelor of Art, Pirani displays both openness and restraint, articulating that space between two competing arguments of history. There is a fierce, underlying tension to his lines, one that unfolds as a counterpoint to the ease of his thoughtful, engaged lyric. “My language is abridged,” he writes, to open the sequence “Ali’s Tiger,” “thin / as a Bible’s paper.”

I don’t even know the words
to Death to America.

Why does it bother you
if I whip my own back?

You think the mood might strike
to deliver the worst gift?

The crater I’ll leave behind
is an unwrapped rose,