If we’re cracked open,
it’s only because something wants out.
—Anne Simpson, “Winter”

Imagine her in 1916, a child in a tanned
hide jacket with three-quarter-length sleeves,
brass and plastic buttons, fringes
and glass beads. There are no pictures.
She always effaced herself
in photos, one hand shielding her eyes,
wavering at the edge of family.
If we’re cracked open

all the stories spill out. But there are no stories,
only a four-year-old girl and her little buddy
in the years of the Great War.
She reappears in 1935,
now wife and mother, all stories silenced.
She was never quite there.
Cracked, the roles rubbed thin—
because something wants out. 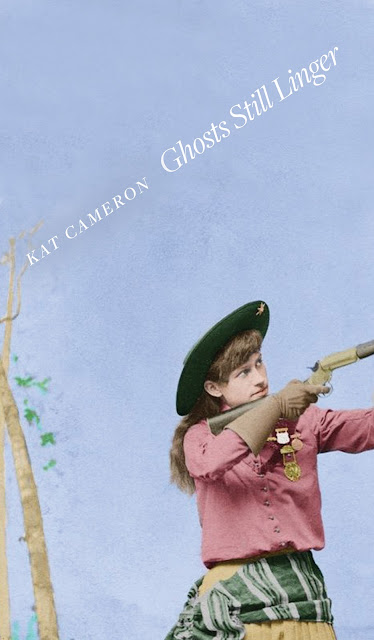 Edmonton writer Kat Cameron’s second poetry collection and third published book is Ghosts Still Linger (Edmonton AB: University of Alberta Press, 2020), following on the heels of her debut poetry title, Strange Labyrinth (Oolichan Books, 2015) and short story collection The Eater of Dreams (Thistledown Press, 2019). There is something in Cameron’s collection comparable to Calgary poet Emily Ursuliak’s own full-length debut, Throwing the Diamond Hitch (Calgary AB: University of Calgary Press, 2017), [see my review of such here] in the shared historical depiction of prairie women; whereas, admittedly, the women being written about in Ursuliak’s collection were very specific. Whether the women in Ghosts Still Linger are based on actual people does fall into speculation. Either way, Cameron does articulate a sense of how these women were held to the expectations of the times in which they existed, versus Ursuliak’s depiction of two women very much refusing those same set of expectations. “I will drive up the Old North Trail,” Cameron writes, as part of the poem “Old North Trail,” “the same trail my great-great-grandparents / followed in 1891—that spring // the Red Deer River flooded, the men / missed the ford and foundered, a horse drowned, / and a loaded wagon floated downstream // with a young man clinging to his possessions.”

From prairie history to cultural considerations such as the Edmonton Oilers and Alberta bumper stickers, Cameron’s poems examine what occurs when life gets caught up against external forces, attempting to articulate the ghosts of what has been lost, and what may have been set aside, writing out a confluence of women from Alberta to Wyoming, through boom and bust, through hope and loss and sadness and grief. These are characters that fight to remain standing, something that, at times, is either all or more than they are capable of. In three sections of short lyrics—“Ghosts are Ordinary,” “Alberta Advantage” and “Lightning over Wyoming”—Cameron composes her lyric narratives as short scene-sketches, writing out a particular moment or sequence of moments in the lives of the woman or women she is attempting to capture. Her articulation of the boom and bust, the “pissing it away” of Alberta wealth is rife throughout the collection as well, such as the poem “Rollerblades,” speaking of urban scavengers, a poem that ends:

Urban magpies pick up debris
like mudlarks on the banks of the Thames
who scavenged for scraps
of coal and copper
in the raw sewage of the river.

The third section explores some of the characters of the semi-mythological west, writing out William “Buffalo Bill” Cody, Louisa Maude Frederici Cody, Louisa Cody Garlow and Annie Oakley Butler on the endurance and calculation of independent prairie women, on what they had to endure or choose to cultivate their freedoms. To end the poem “Little Sure Shot,” on Annie Oakley Buckley, she writes: “Would the act have worked / if she hadn’t skipped into the arena / blowing kisses, if she hadn’t done / that cute little kick at the end of each show? // An image cultivated as carefully / as a homesteader’s garden.” While certain of the individual poems in the collection might not be as strong, they work in unison, in collage, as a single, book-length unit. Some poems are longer stretches of narrative, while others are moments, each working their way towards a collective arrangement of loss, grief and ghosts.

She cries so easily now, over her dead sisters, how she is a burden.
When I was young, she would collage Valentine poems onto paper hearts. Now
her hand trembles, curls into a claw. She can’t write her name on birthday cards,
that smooth cursive. She says, “I can’t make my body work,” and her words
rip my heart’s paper chambers.

Posted by rob mclennan at 8:31 AM
Labels: Kat Cameron, University of Alberta Press