Hazel White, Vigilance Is No Orchard


A project arrives in space.

Figure what is given:

Mountain backdrop
alluvial fan to the sea
“at the edge inventing:

Try talkback. Try leapfrogging bewilderment with a
readiness to act.

Not a metaphysical hum
from over the horizon but something presently large in the bush
in the hand. (“View 2 : the way about”) 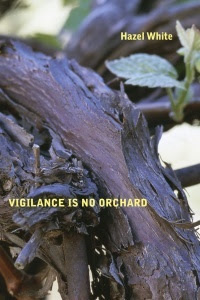 Thanks to a parcel of books gifted by the author, I’m just now going through San Francisco poet Hazel White’s second full-length collection, Vigilance Is No Orchard (New York NY: Nightboat, 2018), on the heels of her debut, Peril as Architectural Enrichment (Berkeley CA: Kelsey Street, 2011). Constructed as seven sections plus postscript—“View 1 : away from vertical,” “View 2 : the way about,” “View 3 : what wants to occur,” “View 4 : drought/worry of direction,” “Refuge 1 : cut at it,” “Refuge 2 : forcing a shape” and “Refuge 3 : losing sight”—the poems in Vigilance Is No Orchard exist as a lyric prose suite (constructed out of seven lyric prose suites), a sequence of short fragmented bursts that accumulate into and around the garden, writing openly and across the field of composition. As part of a short 2018 interview posted at The Cultural Landscape Foundation, White responds that “I wrote it [Vigilance Is No Orchard] in response to a work of landscape architecture: the garden Isabelle Greene designed in 1982 for Carol Valentine, internationally known as the Valentine Garden. I hope very much that my time researching the experience of space and developing a dense and particular mode of expression (both of these necessary to my writing about Greene’s extraordinary garden) has enriched my understanding of landscape.” There is something quite compelling about the fact that both of White’s books respond to ideas of architecture: each book is clearly structured as a single unit, held together through a sequence of intricate, open, ongoing lyrics. “Weight rolled off the page; risk bought it. Synthesis of direction and what to do. / then was no time for figuring, fingering, if this hillside might stall all navigation.” (“View 1 : away from vertical”). There is so much in the space between her words and her lines; an expansiveness, stretched out and across a wide canvas. There is also such a wonderful musicality, a flow, to White’s lyric, such as this opening stretch to a fragment of the second section, that reads: “Currency strums through the sternum sideways along the shoulder bones to the / back, which is a text, not a mass, but movement, each rib loose, the way life is. Fly it? // I ride it. Sounds may rocket out of the mouth.” As the postscript to the collection provides:

At the end of the garden—

an orchard and a field of pork and beans growing in, growing out, no fuss, language earning its keep. Why did I go in to index its presence, risk such a vascular distribution! I tie the why of it into the larger landscape (no upright needed) to make a new out-of-frame direction, transparent churn toward exit, brittle flecks of effort on the insides of my arms, but I keep my chin lifted. The image no longer money but the spring that lost its victorious tones against the trunk of the pomegranate tree and presents itself, if I squat, in a memory beneath my feet.

—Reader, you’ve come through, across, close by. I’m thinking of you from here, in San Francisco, six miles in from the Pacific Ocean, verifying the lines of my dress, its embroidery, a round-the-back button of my own. Because a garden, like a photograph, can die, I’m placing the flat fact of it here, in the dry, like certainty’s stored apples and pears.

White’s is a book on building, unbuilding, collecting and assembling, articulating how language, structures and gardens are constructed, both naturally and artificially. American poet Cole Swensen wrote on the seventeenth-century French baroque gardens designed by the father of the form, André Le Nôtre, in her Ours (University of California Press, 2008), and Montreal poet Stephanie Bolster wrote on formal gardens in A Page from the Wonders of Life on Earth (Brick Books, 2011), and White’s exploration of the works of landscape architect Isabelle Greene and her iconic Valentine garden feel both a sibling collection to those two, although one with a different kind of looseness and openness. After all, Swensen and Bolster are writing on formal gardens leaning more on the Victorian ethos—nature controlled and domesticated—while White’s subject suggests less an overpowering structure than a collaborative, wilder one.

As part of a four part interview with White conducted by Sarah Rosenthal for her Sculpting my Life blog, around the composition of Vigilance Is No Orchard, she described the process of putting the book together as a “twenty year process.”

I’ve thought a lot about why this project took twenty years. I’ve come to understand that as an English person, I wasn’t writing about a Southern California landscape from the perspective of someone raised here. I had to take up habitation in a foreign aesthetic. It’s very hard to have lost one’s original place. It’s even harder to write about that. Yet I felt I might never encounter a more mysterious or necessary subject. So what choice did I have? I had to address that desperate resettling.