The false harbor of home:
washed ashore and alien
again.

This belongs to you.
It does not belong to me.

Before: the steamship
That delivered great-grandX.

Before: the brigantine
that brought coffee and the first Bible.

Before: the double-hulled canoe
that arrived to find it was not the first.

Slice the water:
the instinct to take up space.

Trace the trajectory:
the instinct to connect points.

From Hawaiki,
the place from which we come
and the place we will call home
when we die—back to Babylon,
where there was a tower built
by people speaking a common language.

From the urge to remember
and be remembered—
the confundation of language and meaning:
agents of the first
and eternal voyage away. (“To Anyone Who Can’t Get Home”) 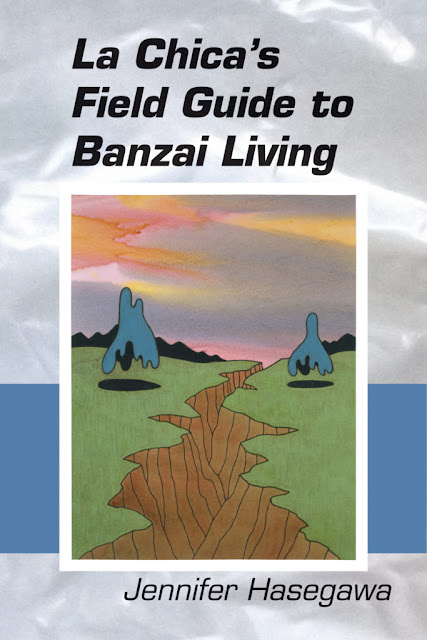 Constructed as part meditative lyric, part performance and part chant is San Francisco (by way of Hilo, Hawai’i) poet Jennifer Hasegawa’s full-length debut, La Chica’s Field Guide to Banzai Living (Omnidawn Publishing, 2020). Structured in a trio of sections—“Propulsion Kingdom,” “Guidance Kingdom” and “Payload Kingdom” (propulsion, guidance and payload all being rocket and missile components)—Hasegawa’s lyrics write slant on home and displacement, from the traveller to the immigrant to the notion of the alien (both immigrant and extraterrestrial). As she writes to close the poem “21st Century Travel”: “My bones / tell time. // My blood / drips pyramids. // Your fear / wants walls: // Tell me / what you’re afraid of / and maybe / you’ll find your way home.” Hers is a fierce and intricate, intimate lyric, simultaneously expansive and exploring erasure, erosion. “They kept the world / wild and left / the problem solving / to chance.” (“The Slow Decay of Mystery”). This is an impressive debut, and Hasegawa’s poems are remarkably vibrant, as the performance elements resound from the page with a force enough to echo, refusing to lay flat but to spark and sparkle with energy; I can only imagine how well these pieces work as part of a live performance.

“I am a fourth edition product / of the United States.” she writes, to open “Drippy Leg Mystery Solved,” “I am loading…[.]” Hasegawa writes on belonging, and about being; her work expands and contracts, from the notion of home, to world events, through which individuals are displaced, injured or worse.  She writes on connection and loss, of human concerns and outer space, and the ways in which we interact and interconnect, as well as those points of conflict, including a poem referencing 9-11, and a haunting poem on the attacks in Paris, “Kamikazes à Paris,” that begins:

Tunisian sisters
lived in a quaint flat downtown
then, they moved into

a handful of dust. Have you
been to Paris? What was it like?

Posted by rob mclennan at 8:31 AM
Labels: Jennifer Hasegawa, Omnidawn