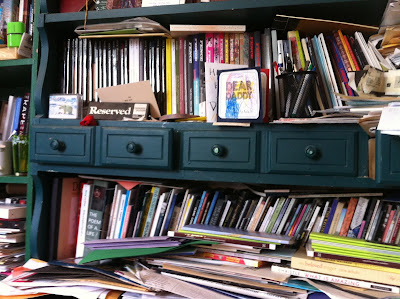 On May 8, someone on twitter asks: Why is it snowing? The following day, the same question. Today is colder than yesterday. The sky is overcast, and there’s even some rain.

I attempt to return to the head-space of writing, after my father’s funeral. This new post-father space. Given the three days I composed his obituary—between his death and the service—I’ve had to replace my background music from Brian Eno’s ongoingness to Chopin’s “Complete Nocturnes,” as performed by Brigitte Engerer. Eno had become infected with that onset of grief, an ongoingness within which I did not wish to live. I required a turn of the page. Chopin, for now. Until a further page reveals itself.

I feel emotionally exhausted, and attempting to figure out exactly what to do next. As Nathan Hill writes in his May “Postcard From the Pandemic: A Solid Little Feeling” for Poets & Writers: “It’s a paradox: I’ve never had so much time to be productive, yet so little will to produce.” If this suite of essays began as a deep dive into my distraction around global pandemic, another distraction has layered on top of another. I attempt to begin. I attempt some kind of spark or pilot light. As Ali Smith wrote, as part of her Artful (2013):

I am seeking that spark, that word. Can’t you smell oil? At my father’s funeral service, his former hired man, Jack McCourt, mentioning my father had said this during a visit, just prior to lockdown. Can’t you smell oil? Jack couldn’t, and neither could the subsequent furnace man my father called in. There’s nothing wrong here. Two weeks prior to my father’s death, his furnace exploded out from under him, bursting out black oil smoke throughout the farmhouse at 3am. The furnace, of course, is set directly underneath his main floor bedroom, underneath his hospital bed. How did the furnace explode out and not up? Bits of metal dug deep in the wooden stairs, but the cellar ceiling remained unaffected. And while everyone else panicked, he remained unshaken. You’re making too much of this, he told my sister. Can’t you just put me in the shed?

I don’t have to think about days of the week anymore. My tracking, every second Friday to head to the farm for a weekend of caregiving, is gone. I can’t track days. Christine offers that I could, possibly, start paying attention to Rose’s homeschooling, and the various Aoife and Rose school-related zoom meetings scheduled throughout each week. This is less suggestion than admonition. She’s right, of course, but she misses the substance of my loss of schedule, and the feeling of being untethered in my grief. My father, my final parent, and the loss of the last vestiges of the family home, the family farm.

In Sabrina Orah Mark’s column for The Paris Review, “Fuck the Bread. The Bread Is Over.” posted May 7, she writes:

I send my sons on a scavenger hunt because it’s day fifty-eight of homeschooling, and I’m all out of ideas. I give them a checklist: a rock, soil, a berry, something soft, a red leaf, a brown leaf, something alive, something dead, an example of erosion, something that looks happy, a dead branch on a living tree. They come back with two canvas totes filled with nature. I can’t pinpoint what this lesson is exactly. Something about identification and possession. Something about buying time. As I empty the bags and touch the moss, and the leaves, and the twigs, and the berries, and a robin-blue eggshell, I consider how much we depend on useless, arbitrary tasks to prove ourselves. I consider how much we depend on these tasks so we can say, at the very end, we succeeded.