Bhanu Kapil, How To Wash A Heart


I don’t want to beautify our collective trauma.
Your sexual brilliance resided, I sometimes thought,
In your ability to say,
No matter the external circumstances:
“I am here.”
from this place, you gave only this many
Dessicated fucks
About the future.
Day by day, you discovered what happiness is.
As your guest, I trained myself
To beautify
Our collective trauma.
When night fell at last, I turned with a sigh
Towards the darkness.
I am about to squeeze out an egg, you
Murmured
As you kissed me
Goodnight.
Hold a funeral for the imagination,
I thought. 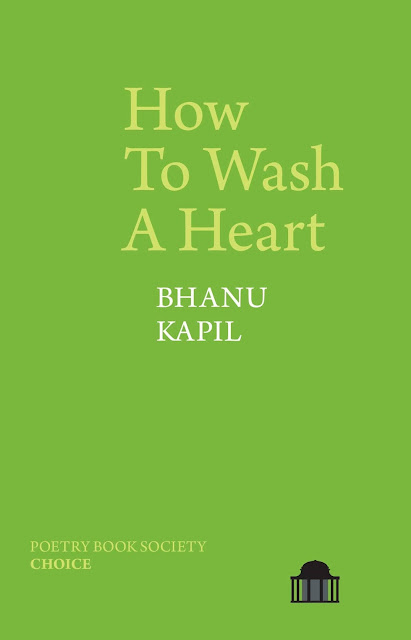 I know I haven’t read nearly enough of the work of Bhanu Kapil [I reviewed a chapbook of hers a while back], “a British-Indian writer who currently resides in Colorado,” but knew enough to order a copy of her latest, How To Wash A Heart (Liverpool UK: Liverpool University Press, 2020), a book self-described as: “Drawn from a first performance at the ICA in London in 2019, and using poetry as a mode of interrogation that is both rigorous, compassionate, surreal, comic, painful and tender, by turn, Kapil beings to ask difficult and urgent questions about the limits of inclusion, hospitality and care.” Kapil’s accumulation of untitled single-page lyric poems, each constructed as an accumulation of short lines, extend into a book-length suite. Constructed out of a sequence of five lyric suites, each section is distinguished only by a single blank page between; a page held as if to pause, and allow the author to gather her thoughts, before continuing. “How thyme migrates.” she writes, to close the first suite: “The chalky blue flowers/ I need something that burns as slowly / As that. / Because living with someone who is in pain / Requires you to move in a different way. / You bang the cup down / By my sleepy head.” She writes of arriving and of leaving, and of the difficulties and the opportunities, the passionate joys and the grief, that such provided. “Though we lost all our possessions,” she writes, as part of the second suite, “I felt / A strange relief / To see my home explode in the rearview mirror.” Her book-length suite invokes memory, distance, trauma and culture, of the visitor, the host and the immigrant. “But this is your house / And there’s no law / That requires / What you’re offering me to last / Or outlast / The moment I crossed your threshold / To eat this heaving plate / Of meat.” She writes of home, and of homelessness, from the vantage of memory, and that of her hosts’ guest room: “The art of crisis / Is that you no longer / Think of home / As a place for social respite. / Instead, it’s a ledge / Above a narrow canyon.” This poem, this book, is a powerful invocation and exploration of being, becoming and belonging, and the distances that one carries within, as well as the distances that one is offered. This is a beautiful, intimate and powerful read.

As she writes in her “Note on the Title” at the end of the collection:

On the night I arrived in London, I received an email from Ankur Kalra, an interventional cardiologist in Akron, Ohio, asking me to blurb his poems, works of heartbreak and passionate love inspired by the Bhagavad Gita! The wifi was spotty and so, though I couldn’t download his manuscript, I asked him to tell me about his own work. What can you tell me about the immigrant heart? “Yes,” he wrote back, “this is the area of my expertise. Of course, anxiety and shock have an effect.” And: “There’s a medical diagnosis attributed to it: broken heart syndrome or Takotsubo cardiomyopathy. Takotsubo is the Japanese term/word for octopus trap. The heart gets ‘stunned’ during acute emotional/psychological stress, and it effects the heart muscle and its pumping function. It loses a lot of its pumping function and assumes the shape of Takotsubo; just its base moves. It can be life-threateneing, is more common in women, and does recover/regain the lost function in several weeks’ times after the acute stressor fades away/is absorbed or processed.”

When the night of the performance came, I read this email aloud then tore my book in half, drenching it in the good blood.

Good Blood: a performance ritual created by Lygia Pape in 2002, in which two people sit facing each other on chairs. Each one holds an ice cube made of red ink in their upturned palm. Whoever’s ice cube melts first, that person is the good blood. The instructions don’t ask for silence, but often, when I’ve shared this practice in faculty training or poetry seminars, the participants don’t speak. I had an idea for the ICA event that was about the audience members, seated, ice cubes dripping on the floor, exchanging stories from the book of their own hearts. But in the end, this was too complex. I had to get it back down to the real floor. And lower the sun through the roof at midnight. It is always midnight in the art museum. As the audience entered, I gave them an ice cube each, made red with little drops. I thought I would say something, but in the end it was simply that, a way to welcome people into the space without using any words.

So, the title for this book came from these experiences, which took place a few hundred yards from Buckingham Palace. Would you like me to write a poem about ?! I can.

How to wash a heart:
Like this.
On a Wednesday evening in early
June
When the delicate blossoms
Turn white then crimson
Then green,
The dressing room
Of the ICA
Is pleasantly cool.
Honey on toast
Brings the hornets,
My mother said.
I’m not your bag of bones
To kick around anymore.
Instead, I pour the kettle
Of hot water
Over the red ice cubes
In a rehearsal
That surprises me
With its strong emotion
And plumes of steam.

In writing these new poems, I diverged – almost instantly – from the memory of the performance. Instead, as soon as I sat down to write, I heard an unexpected voice.

This is the voice of this book: an immigrant guest in the house of their citizen host.