These dark hills can be beaten into form:
mountain sonnets, grassy odes. Words, feelings,
defined within fenced pastures. Over reelings
of the Willis river, my husband informs,
“Each stream has its own sound—this one bubbles,
but listen to the Slate River, how it scrapes along
the rocks.” To me, water is water, no song
of differentiation, no washed troubles,
no real rhythm, the thump, jolt, swing of trains
on elevated tracks synchronized
with airport takeoffs from LaGuardia—
just ripple, bubble, scrape of rock. A tin can gains
speed going downstream—like me, nothing there
to grab hold to, floating down in water’s lair. 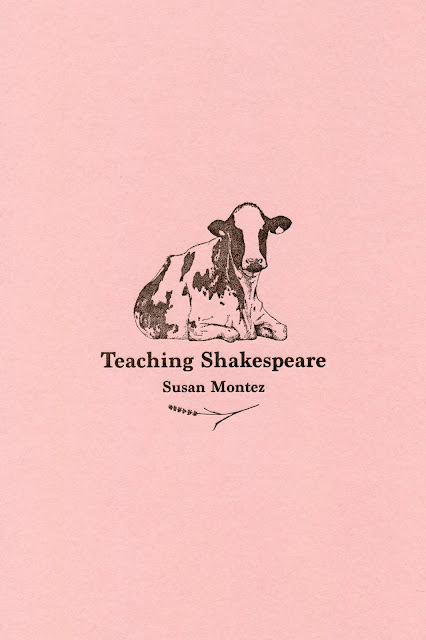 You might be forgiven for not being familiar with the name of American poet Susan Montez, author of Radio Free Queens (Braziller, 1994) and Teaching Shakespeare (Astoria Press, 2020). According to the author biography of this new, posthumous collection (distributed by ugly duckling presse), she was “born in South Carolina, but grew up in Farmville, Virginia” and spent the bulk of her adult life, it would appear, ping-ponging between Virginia and Brooklyn/Queens. Her biography at the back of the collection ends: “In March 2016, Susan Montez decided she would go back to writing poetry and publish Teaching Shakespeare. Four days later, she died.” There is something darkly ironic about a posthumous poetry collection so full of life. Teaching Shakespeare is very much a poetry of lived experience, composing a lyric somehow more conversational, and more intimate than what might have appeared via memoir or journal writing. “Blotchy skinned and pregnant,” Montez writes, to open the poem “My $3 an Hour State-Subsidized Analyst Suggests / Lithium for Balanced Decision Making,” “I watch Soul Trail and look / at old pictures while my husband works / nights at the prison. Here’s me / last summer by mother’s pool, / palmetto trees, looking like Jacquie / O.” Montez and her work were first revealed, to me, at least, through the book’s touching introduction (an introduction that appears to leave out as much as it reveals) by her friend, the novelist Binnie Kirshenbaum; the introduction speaks to how the two of them first met, and Kirshenbaum’s first-hand knowledge of how Montez’ not-uncomplicated but fearlessly lived personal life revealed itself through the scope of her poems:

The impetus for her switching from fiction to poetry was a boy, the peculiar boy, the very peculiar boy, from our fiction workshop with whom we often palled around. One [of] the many ways in which this boy was peculiar was his steadfast refusal to reveal any information, no matter how mundane, about himself. Ask him where he was from, and he’d say, “That’s classified information.” The only exception to this was his invariable response to Susan’s declarations of love and devotion: “I don’t do wet stuff.” The more he hid, the more Susan snooped. She discovered he was in a student production of Hamlet, which was the inspiration for the poem “A Fine Hour.” Once, enamored of an actor/ who ate fire between acts of Hamlet, …. Another thing she learned was that he’d applied for a coveted spot in a poetry workshop taught by Marilyn Hacker. She didn’t learn this until the day before applications were due. That night she cranked out the required dozen poems. One might say that her letter, expressing her desire for proximity to the peculiar boy, was self-sabotage, but she assured Mrs. Hacker that there would be no “vomitous” love-y poems forthcoming. “I don’t do wet stuff,” she wrote.

The obsession with the peculiar boy lasted another year or so. The passion for poetry took hold.

A particularly delightful element of the introduction, also, includes the footnote: “In graduate school, after reading one of her poems, John As[h]bury said to her, ‘Susan, if you’re going to quote Miss Piggy, you have to credit Miss Piggy.’ She marveled that John As[h]bury would know the source of, ‘So continental, moi.’” Montez was student of Ashbury (spelled correctly in the introduction, but misspelled in the footnote) and Allen Ginsberg as well, who prompted the curious biographical musing “A Guru Dies; A Child Is Born,” as Montez wrote on her two poles of connection, from her friend and mentor to her own son. Kirchenbaum offers that it is “a poem that celebrates, in a most unexpected and comical way, their curious kinship before it turns to ache with grief.” As the poem begins:

When Ginsburg’s guru died, the guru’s spirit appeared
in a vision: crystalline, prism, an angel of Jacob’s ladder.

Ginsberg said, “I’ve done the William Carlos Williams thing
all my life. Am I right?”

Seeking references online to the late poet who, according to the introduction, also went by, at times, “Susan Bartlett,” “Susan Bartlett Montez” and “Susan Bartlett Montez Nixon,” I did wonder if her life and work was, in fact, a fiction, perhaps composed by Binnie Kirshenbaum herself, who is an accomplished fiction writer. But no, there do seem to be enough references to Montez, both as poet and teacher at Norfolk University in Virginia, that this appears not to be the case (which is a relief, admittedly), including references to her debut collection. The bulk of Montez’ activity was long enough ago that there would be very little of her online, which I’ve noticed as well for late Canadian poets such as Diana Brebner (and I know very much that she existed). Teaching Shakespeare reveal a lively, thoughtful poet working quietly in her own way, and one that, for reasons unknown, stopped writing immediately after the completion of this manuscript, pushing the manuscript into a drawer for years, until mere days before her death. This is a beautifully-produced collection, and the lyric narratives of her poems are warm, open, funny, intimate, dark and devastatingly clear, and the liveliness of the poems make the loss of the author that much more tragic.

Waves scud fresh salt;
sand crabs burrow quickly.
White feet, Etruscan feet
walk the opalescent memory.
We two, the small, the finite
are lost and parted by this
sea-green foam. Our
Love is residue
flailed under the pier,
barnacles hung on rotting
wood while the sea jolts
under gray storms.
Scullions lost,
a chest rusts in the
sea’s interior, the forgotten
pearls.
What pearls have you now
across this
cyclopean ocean?