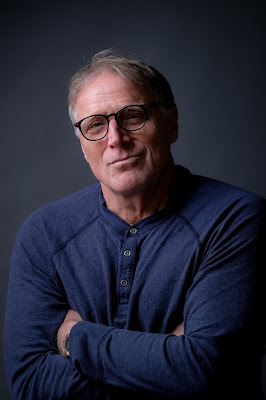 Paddy Scott is the author of The Union of Smokers (Invisible Publishing) and Fatal Errors (Devilhouse Press). His shorter fiction and poetry has been published in Broken Pencil, Grain, Feathertale Review, untethered, FreeFall and other equally fine places. As well, he has been a nominee/finalist for the Canadian Magazine Awards and the Alberta Magazine Awards, and been longlisted three times for various CBC awards He lives in Trenton, Ontario.

My first “book” was the chapbook Fatal Error, published via the incredible kindness of Amanda Earl and Devilhouse Press. It arrived about two years before my novel, The Union of Smokers (Invisible Publishing), although the novel was written first. The chapbook was a much more relaxed affair, a kind of introduction to the big bad world of timelines and edits, which is not to say that working with Invisible wasn’t the great joy that it was, thanks to Leigh Nash. As far as life changing goes, there hasn’t been much of that. Even with the lockdown I leave the house about the same amount (only when necessary) and none of it having to do with books.

I can’t definitely say that fiction did come first. I seem to recall splitting my time equally between fiction and poetry, although much of my poetry crap was long form, possibly fiction disguised with extra line breaks.

One thing I can say without hesitation is that I’ve never had to ask myself what or how ahead of the next thing. Even if I have no idea what is going to happen or who it’s going to happen to, I can sit down and start. It might take me a month or two to realize that what I have been writing is garbage, at which time I abandon it, yet I never consider it time lost or wasted. Chances are I have probably already started on something else anyway. Consequently, I’m not a big note taker in advance of the writing, being more of a W.O. Mitchell freefall guy, I think.

Every book I’ve written (I’m counting all the unpublished ones too) began with novel as the goal. Even the collection of short stories in Fatal Errors are taken from a larger linked series. I think a writer will have a sense of the kind of legs their idea has, and I’m including poetry here. Sometimes an idea works best shortest.

I’ve only read a couple of times, and nothing in support of Fatal Errors or The Union of Smokers, so I’ll have to get back to you on that one, rob. Best guess, and from the little I recall? I can’t think of anything less useful to the creative process. Readings are all about the past, the writing already written.

This is a series of odd questions to answer, because each assumes I’ve begun something with some sort of preconceived intention. While I do enjoy fables, parables etc, if I have a larger point to make beyond what my little characters are doing, it won’t be because I’ve pushed them toward that point. Organically, a lot does come from my past, how I’ve been affected, how I wish I had not been affected, what could I have done or had done to me differently, but these aren’t questions as much as they are wishful thinking rearranged to suit a fictional aesthetic, whatever that is going to look like. People can get out of it whatever answers they want, just as long as they’ve brought their own questions with them. Or they can just enjoy the walk.

Let’s put it this way. I live in a city that doesn’t have a bookstore and whose library doesn’t even carry my book. I think the larger “culture” should be spared my thoughts on the matter of my role in it when my smaller one won’t even acknowledge me. lol

One of my regrets is having not solicited the guidance and opinions of others sooner. It’s no coincidence that my successes didn’t come until after I purchased the available brain power of people like Ruth Zuchter, Bethany Gibson of Narrative Agency, and Kathryn Mockler’s writing group. Even if those projects weren’t these projects, everything I learned from them, even generally, did find a specific application later. I’m leaving Leigh off this list because I’d never consider her “outside”, although I know what you mean. She arrived on the scene already fully invested in The Union of Smokers and how to make it better. I had no problem with that.

Writing advice? Don’t create more questions than you have answered for a reader.

My writing day begins EARLY. Around 3, 3:30 am. I coffee up and catch up, then get going on whatever I’m working on. I can get in a pretty good six hours before puttering takes over, but I leave the work on the screen and go back to it on and off for the rest of the day.

I sort of answered this in question 3. I can’t recall ever being “stalled.” That being said, I’ll keep a copy of something by James Joyce within reach, and Moby Dick. (See “puttering” above.)

I have a couple of painter friends who I talk with via internet quite frequently. Both are also big freaks of nature (I mean nature freaks), so our convos can branch every which way. They aren’t influences as much as they are creative people who have interesting things to say on topics unrelated to writing. That’s a kind of influence.

Travel to Romania. My grandparents came from there.

Well, since I have already done the thing I would end up doing (carpenter) if I hadn’t been a writer, all I have left to do is write.

Boredom, probably. It was a long time ago, but I seem to remember a lot of free time alone.

Because I’d just had a conversation about the film, I’m going to say Immortal Beloved. The soundtrack was pretty good too. Angie Abdou’s Bone Cage introduced me to Angie, so that was unexpectedly great.

A memoir based on the year I spent living and working at the Hotel Quinte in Belleville, to earn enough money to move to England where I would write my first novel. It comes with a lot of good advice on what not to do.