in the Synod of Dort
find a solitude,
near the chessman and the tax returns
where the lammas dream
(“PART 9 : TRIM ROSES, MARY”)

I’ve only recently discovered that New York poet Lisa Jarnot had a book out last year, A Princess Magic Presto Spell (Chicago Il: Flood Editions, 2019), a larger version of a project she discussed during a 2015 interview at Touchthe Donkey (a section of the work-in-progress appeared in the fourth issue), as well as in the acknowledgments of the current collection:

I began composing this poem after the birth of my daughter Bea in May of 2009. Realizing that my vocation in life was now motherhood, I settled upon the modest goal of writing down three words a day, when possible. At the end of every yearly cycle, usually in late summer, I combined those phrases into the individual sections of this poem. It had long been my goal to write a book-length poem, and I had long struggled to find a form for such a project. I was surprised that during a new and exhausting and exhilarating stage of life as a caretaker for a young child, just such a project would come into fruition. 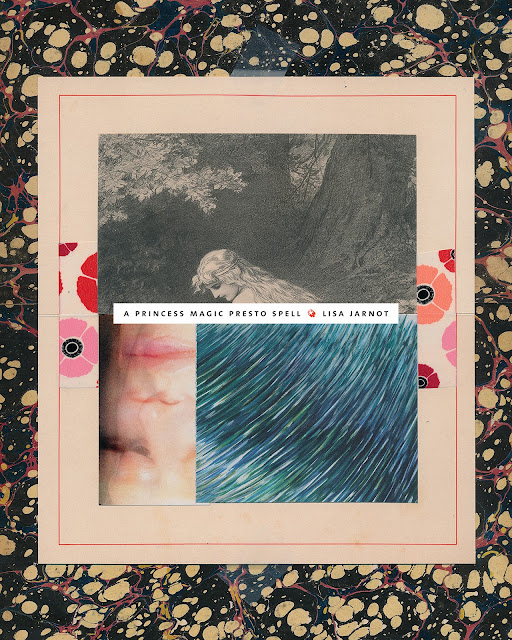 Jarnot is the author of multiple full-length poetry collections, including Some Other King of Mission (Providence RI: Burning Deck, 1996), Ring of Fire (Zoland Books, 2001; Salt Publishers, 2003), Black Dog Songs (Chicago Il: Flood Editions, 2003), Night Scenes (Chicago Il: Flood Editions, 2008) and Joie De Vivre: Selected Poems 1992-2012 (San Francisco CA: City Lights, 2013) [see my review of such here], as well as Robert Duncan, The Ambassador from Venus: ABiography (Berkeley CA: University of California Press, 2012). A Princess Magic Presto Spell is structured into nine sections (one annual section over nine years), the first three of which also appeared as a chapbook under the same name published by Solid Objects in 2014 [see my review of such here]. The collage-structure of her book-length poem is curious (she has worked previously via collage, such as through her first full-length collection, but not so deliberately or strategically, one might suggest), purposefully built as a kind of accumulation (and something I attempted similarly over those first three months of my second daughter, Rose—a poem equally prompted, structured and distracted—finally produced as The Rose Concordance, a poem that eventually landed in my full-length collection, A perimeter). There is something impressive about how the poem holds itself together through such an extended composition, moving from rough notes to an annual structuring to a decade’s-worth of full-length architecture. How does a poem develop over such a period without losing cohesion? Her canvas is wide, even as her subject matter moves both outward, and more intimate, into the small, daily spaces of domestic and parenting. As she responds as part of her Touch the Donkey interview:

I’ve never written a book-length poem before, and have always wanted to, so the opportunity arose through the circumstances of slowing down to be a parent. I expect the book will sprawl on until it comes to some organic finishing point. I’ve joked that it will be 18 years/18 sections, but I really don’t know how it will play out. My work has always been based on sprints of lyric/musical energy, so this is in fact very different that my other works. I think it’s important to include motherhood, domesticity, the household in poetry—the labor-value of these things is always underestimated. And the clarity of children’s insights are overlooked because they are smaller and lesser than us. I am very keen on the idea of democratizing the relationships between children and adults. This is one of my reasons for not sending my daughter to school—I don’t want her to be talked down to and "taught"—I want her to grow autonomously. All of that gets filtered into the poem.

I would be curious to know if this project continues, if this current collection is but half of the projected “18 years/18 sections” that will emerge in another decade, perhaps (and then, of course, comparing that work to this, seeing the progressions that might emerge over eighteen years of composition of a single, extended work). There is something interesting in how this poem does appear to be a kind of “catch-all,” including anything and everything through the pages of this wildly expansive work: writing of sleep, snow and coffee; of theory, breakfast and memory. “there was a Duncan making rugs,” she writes, in the first few lines of “PART 5 : THE SUBLIME PORTE,” “de Koonings of ghee, / congeries of events, / and I don’t like my hair […]” She writes a shorthand from an active, thoughtful mind in the midst of household chaos, domestic patters and patterns and, as the back cover attests, a “chronicle of family life that is intimate and yet open to all the world.”