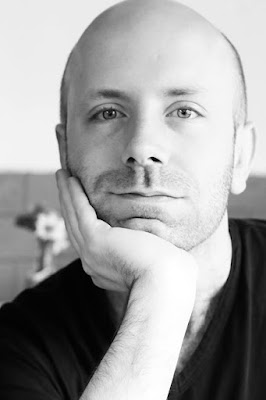 Max Brett lives in Paris. Nor Do These, his first book. was published by [PANK] Books. He previously worked for an anticorruption think tank, and as a journalist with diverse media in the United States and Mexico. Max has been under stay-at-home orders in a studio since 17 March.

1 - How did your first book change your life? How does your most recent work compare to your previous? How does it feel different?
Learning that the book was going to be published interrupted a tedium of repetitive patterns and habits in New York. Knowing the book would be in paper gave me a moment of very powerful happiness, which then disappeared. And then the patterns resumed! My journalistic work had, obviously, been published, but this was another thing. I’d never published a poem anywhere.

It was released at last year’s AWP, as my life was quickly changing: my partner had moved to Paris for an opportunity, I was leaving a job whose mission I cared about and was leaving New York, and also struggling to find work in Paris from New York. And I also didn’t know whether being in New York was important to my writing, or important to my career as a writer.

My partner can introduce me as “a poet,” rather than “an employee of a nongovernmental organization working on better governance in resource-rich countries,” which is shorter. Both were accurate.

2 - How did you come to poetry first, as opposed to, say, fiction or non-fiction?
I came to nonfiction first, through journalism. Poetry was always immensely attractive as a form, and the line between it and other forms is in a constant blurring.

3 - How long does it take to start any particular writing project? Does your writing initially come quickly, or is it a slow process? Do first drafts appear looking close to their final shape, or does your work come out of copious notes?
I’m a reader first. I spend considerable time that is fully my own consuming and processing the writing of others, particularly fiction. I definitely procrastinate on writing and avoid it until it is actually and concretely unavoidable. By that, I mean I am being someone mandating I write, or me being unable not to.

4 - Where does a poem usually begin for you? Are you an author of short pieces that end up combining into a larger project, or are you working on a "book" from the very beginning?
I do best with assignments, in terms of starting. I am not a decision-maker. There was no sense the work in Nor Do These would become a book as I was writing it, or what it would be at all. But I think books are always what I wanted to be writing, rather than something standalone, like Frank Ocean’s new work where there’s a single output, rather than albums.

5 - Are public readings part of or counter to your creative process? Are you the sort of writer who enjoys doing readings?
I never had read to a group of people before my book was published by [PANK]. The first reading was scary, awful, agonizing in the leadup. I felt awful the whole day and dreaded it. My professional musician friends like Laura Barger (who plays with Yarn/Wire) or Ricardo Gallo (who plays with a bunch of groups and has a tonne of work available online) tell me these nerves are real and they need them, but I found it totally unnecessary to feel that way and that hasn’t completely abated. I didn’t know what it would be to be in front of people, but it’s special, and you can tell some people’s enjoyment of poetry involves this performative aspect.

I dread readings as reader and think they’re magical as a listener and end up enjoying them from either role.

6 - Do you have any theoretical concerns behind your writing? What kinds of questions are you trying to answer with your work? What do you even think the current questions are?
Not questions, exactly. I think I think about class division and inequality and disparity, and I am also sort of a classist, which is why I won the “V.S. Naipaul Award” at AWP. I am very interested in suffering, very concerned about what is outside our individual control, which seems to be everything, and the desire to control those things that are outside our control. I am interested in systematic forms of discrimination, and of the administering of pain, usually with an economic edge. I am concerned with natural resource extraction and consumption, in a human and ecological sense.

7 – What do you see the current role of the writer being in larger culture? Does s/he even have one? What do you think the role of the writer should be?
I think creative writers just need to work hard and to do their best to create beautiful work—ugly work can be beautiful, and awful work can also be beautiful. This can be meaningful direct work about the present moment or total absurdity, as the writer likes. I think they can take the business of what they do seriously or take being unserious seriously.

I think also as we’re inundated by social media and video on demand and sometimes mindless, passive creative work, writers should be show that this medium is important and relevant, and there are so many great, active writers making these forms relevant.

8 - Do you find the process of working with an outside editor difficult or essential (or both)?
In journalism, editors are necessary. I’ve gotten irritated at them in real time and simultaneously known how much I need them, which must be common. I am working on a collaborative book now and I am finding my partner’s edits to be very helpful—they are sort of administered with a light touch, which is good because I have the illusion that I don’t need editing. But everyone needs and editor, and everyone especially needs a copy editor. I have no idea what working with an editor on poems or stories or a novel would be like, but acknowledgement pages indicate it’s great.

9 - What is the best piece of advice you've heard (not necessarily given to you directly)?
You have to have some self-respect.

10 - How easy has it been for you to move between genres (journalism to poetry)? What do you see as the appeal?
Poetry can be not iterative multilaterally or bilaterally. It can be unilateral. Journalism is a negotiation.

11 - What kind of writing routine do you tend to keep, or do you even have one? How does a typical day (for you) begin?
Writing has always been built around full-time work, which was also writing-focused, and worked as a constraint. A typical day in Paris begins with cold coffee, maybe some sardines, some panic at not really being able to go out, job applications and then just days of reading and reading until I can’t read anymore, and then writing.

12 - When your writing gets stalled, where do you turn or return for (for lack of a better word) inspiration?
I think of my partner. I use Slack, where I communicate with my 10 of my favorite people, often cruelly. I think about Nicholas Alan Cope, who shot the photo on my book cover, and how he was born on the same day in the same hospital I was and is much more successful, and who has published more books than me, and how much I need to beat him.

Maybe libraries, I think, here in Paris. I so miss them right now and I know Parisians do, too. In New York, galleries and a set of stairs in a public park in Sunnyside. I didn’t know Poets House in New York existed until right before I left and sometimes I just think of its existence to make me happy.

13 - What fragrance reminds you of home?
Raw garlic, freshly picked basil and brewing coffee are tied to home.

14 - David W. McFadden once said that books come from books, but are there any other forms that influence your work, whether nature, music, science or visual art?
Certainly, visual art is in my brain as I am working and when cities are up and running, most of my leisure time is at those galleries. Nor Do These was written during a period in New York when I visited galleries three or four times per week, not exactly meeting anyone, soaking in visual art.

15 - What other writers or writings are important for your work, or simply your life outside of your work?
In terms of people whose work I admire, the work of Adolfo Bioy Casares and Susan Howe and James Baldwin and Don DeLillo and Sarah Kane are very important to me, as well as the writers of “The Simpsons”—they are heroes I have no access to. After moving to Paris, it has been great to meet visual artists and writers who are open to and interested in collaboration. This sort of collaboration felt less simple in New York and I have no idea why.

17 - If you could pick any other occupation to attempt, what would it be? Or, alternately, what do you think you would have ended up doing had you not been a writer?
I would have been an actor for film, primarily because of Sarah Peters, a television writer in Los Angeles, and also Martha Jackson, who runs Graylight Farm in New York. Sarah and Martha helped me believe in my sense of humor.

18 - What made you write, as opposed to doing something else?
Through the journalism perspective, I thought that learning every day and synthesizing that information gathering into some concrete form was great: the thing to do. And then I worked for media organizations.

20 - What are you currently working on?
I’m working on securing gainful employment in Paris. I’m finishing a second manuscript, also poetry, that I think is very different from Nor Do These. Also a collaborative children’s book that my partner will be illustrating. I am also thinking through a longer, novel-type thing. And there’s my coloring book, which is finished conceptually but hasn’t been published.