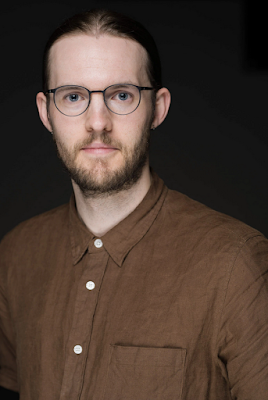 Matthew Tomkinson (matthewtomkinson.ca) is a writer, sound designer, and doctoral student in Theatre Studies at the University of British Columbia. His debut collection of short prose, Archaic Torso of Gumby, co-authored with Geoffrey Morrison, is out with Gordon Hill Press as of March 2020, and his chapbook, For a Long Time, is available from Frog Hollow Press. Matthew’s music for dance and theatre has been presented at a number of festivals including PuSh, New Works, Vines, Dance in Vancouver, and Dancing on the Edge. His work spans a wide range of genres including acoustic ecology, deep listening, musique concrète, noise, ambient, and techno. Together with Andy Zuliani, he presents collaborative sound art under the name Magazinist. As a doctoral student, Matthew’s research considers contemporary representations of illness and disability in performance, with particular attention to sound. He lives in Vancouver on the unceded territories of the xʷməθkwəy̓əm (Musqueam), Skwxwú7mesh (Squamish), and Səl̓ílwətaɬ (Tsleil-Waututh) Nations.

My first publication was a chapbook called For a Long Time. The book is what I call a “story told in quotations,” which gathers together a collection of sentences containing the title phrase, beginning with Proust and ending with Jo Nesbø. Because I spent so many months looking for sentences beginning with those words, “for a long time,” I’m now unable to read or hear that expression without doing a double take. Which is to say: the biggest impact it’s had on my life is probably the way it continues to invade my consciousness.

The chapbook and the more recent book of short stories, Archaic Torso of Gumby, couldn’t be more different, not least of all because the latter book is collaborative. But there are a few shared themes – obsession, repetition, curation, list-making, intertextuality.

2 - How did you come to prose first, as opposed to, say, poetry or non-fiction?

I think I’ve always done a little bit of everything. ATOG is mainly prose because Geoffrey and I were interested from the get-go in a kind of worldbuilding project – not that worlds can’t be built out of poetry, but that prose seemed better suited to the kind of maximalism we were going for.

It took five-ish years to finish ATOG, but somehow it never felt slow. All the stories developed at their own pace and presented different roadblocks. Generally speaking, I write pretty slowly and myopically. I rewrite a sentence until it feels good and then move on to the next one, rarely knowing where things are headed. Sometimes there’s research and I’ll take extensive notes, 99% of which won’t get used. But mostly it’s just the odd character name typed into my phone. The stories that take the longest to materialize usually start as a high-concept idea that I struggle to find a viable framework for, but I’ve learned to let ideas go if there isn’t some ease in trying to write them.

With ATOG, Geoffrey and I wanted to do both: write short pieces that end up combining into a book. In keeping with the idea of worldbuilding, we wanted all the stories to feel like they were spinoffs of one other, as though they were all set in the same fictional town, without actually doing so.

They aren’t part of my process, per se, but they certainly change my own relationship to my work. I had always thought of my chapbook, For a Long Time, as a very on-the-page story, but reading it aloud feels like a hypnotic incantation, and I’ve come to value the aural aspect of the book more than anything. Otherwise, I’m highly allergic to public readings: my voice gets dry very quickly and the whole thing’s a struggle.

As a reluctant academic, I try to keep theoretical concerns out of my creative writing. That said, many of the stories in ATOG are constraint-based, but more because I find they help me generate material and less because I’m convinced that these constraints might enact something beyond the text. With ATOG, the main question we were trying to answer was probably: what’s special about collaboration and how can we harness it? For me, the question hasn’t changed because I’m interested in doing more collaborative writing and seeing what other shapes it could take.

I have no idea! All I can say is that I appreciate writers who introduce me to other perspectives and lived experiences, writers who push boundaries, make others feel seen, speak truth to power, etc.

Both. It’s especially strange to write a collaborative book where you function as each other’s editor, and then to have a third party enter the picture. It kind of uncomfortably emphasizes the fact that the book is a shared delusion between two enablers.

I once wrote to Rikki Ducornet and, in reply, she signed-off with “THRIVE!” It’s unquestionably the best single-word advice I’ve ever received.

I tend to write in the morning, usually from seven to noon, mainly because I have zero mental stamina in the latter half of the day. I stick to this schedule at least a few days a week, but it’s not regimented by any means. Apparently I’m unusual in that my day starts with making breakfast within five minutes of waking up.

I usually talk it out with a friend and they’ll usually say something or give a suggestion that will open it back up again.

As per the title, Archaic Torso of Gumby is heavily influenced by cartoons and animation. The book is meant to feel sort of rotoscoped.

I’d like to learn to program in Python or Java, and I could imagine doing that for a living.

Writing has mainly been a side project for me. It comes in and out of focus. I’m almost always doing something else.

I’m currently working on a book of found poems called Nosologies about outdated medical practices, drawing on archival texts going back to the 17th century. You’d think it was inspired by the current pandemic, but I started it last year. It’s about indeterminate vapours and superstitious purification rituals. Ultimately, I see the project as an opportunity to transfigure my own hypochondriacal fears and tendencies, which have only ramped up during the C19 situation. In other words: THRIVE!