Our father tells us the French word for peephole is judas. He bears down on us, angles his pinky toward his eye. The betrayer is the size of my pupil, he says. Sometimes smaller. We don’t reply. We let him drone on about the Bible, about respecting your father, staying out of his business. We don’t know what any of this has to do with the French language. Quelle? we say. Our father’s cheeks redden, his chest swells. He turns around, and we follow him into the hallway. He rummages through the closet and brings out a roll of black tape. He snaps off a piece and sticks it over the front door’s peephole. See? he says. Now come here. We step forward and he tears off several more pieces of tape. He presses the tape over our eyes. We hear him walk down the hall and enter his bedroom. His muffled voice seems to be directed to someone else now. Maybe he guesses about understanding our spy game; the mission our mother gave us to identify his lover. We peel off the tape. Our eyelids burn but the pain is worth it. We slip inside the hall closet and keep the door ajar. Two loud voices echo through the house. Then they go quiet. Through our watery eyes, we see a strange man open the front door and run toward his car. 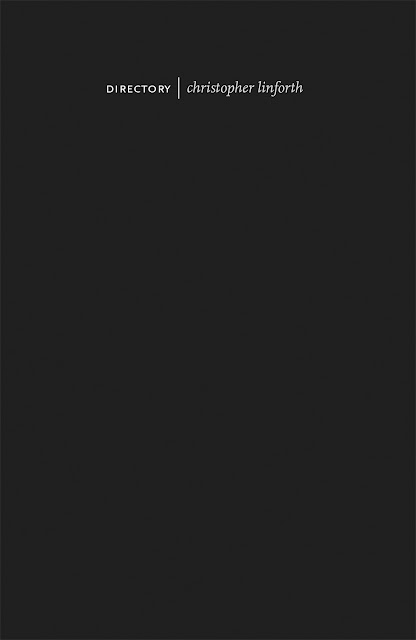 Lately I’ve been reading American writer Christopher Linforth’s absolutely fascinating and devastating DIRECTORY (Otis Books, 2020), a beautifully written but dark little book of short prose fictions that swirl and accumulate into the possibility of a novel. A follow-up to his debut collection of short stories, When You Find Us We Will Be Gone (Lamar UP, 2014), DIRECTORY, a book self-described as an “experimental flash collection,” opens: “Back when we loved our mother, we recorded her telephone calls. Most nights she took the handset into the bath and talked to her string of men.” In this opening piece, Linforth offers the story of twin boys, listening to and recording their mother’s series of phone sex calls. “She said she had long tanned legs, freshly shaven – the men would not believe how smooth her skin felt.” Through accumulation, each story, most of which are no longer than a page or two, Linforth writes the dark evolution of the two boys—two voices swirling into a third—in dense prose. There is something incredibly striking in the way each section, each story—forty-one in all—writes out a particular scene, a particular moment, and are sequenced and accumulated in such a way as to tell a larger, more sustained narrative. As he discussed the book recently, as part of an interview at Fear No Lit:

Flash fiction as standalone pieces have been around for some time, yet book-length interconnected flash is a rarer form. Marrying short pieces within a larger conceptual framework is much tougher than it might appear. In recent years, there have been successful examples of this, and I'm thinking of the work of Lance Olsen, Selah Saterstrom, Aimee Parkison, Kim Chinquee, and so on, and it seems to me that these works revolve around a conceptual anchor, whether that be an exploration of personal history, or fragmentary representation, or thematic refrain, etc. The shortness of the whole work, and the individual sections, is only the beginning. The innate quality of briefness has to be articulated through a large lens, providing an intimate experience yet allowing for a wider scope for the project, and that is what I tried to accomplish with Directory.

Posted by rob mclennan at 8:31 AM
Labels: Christopher Linforth, Fear No Lit, OTIS/Seismicity