Jameson Fitzpatrick, Pricks in the Tapestry

Upon opening the first page of New York poet Jameson Fitzpatrick’s full-length debut, Pricks in the Tapestry (Birds, LLC, 2020), I was immediately struck by the opening poem, “Scintilla, Star,” a single-page piece that ends with:

I found it was better,
if I could not be no one,
to be someone. Small, but
particular. Specified, which was
an apprenticeship for special.
Cold, another word for cool. 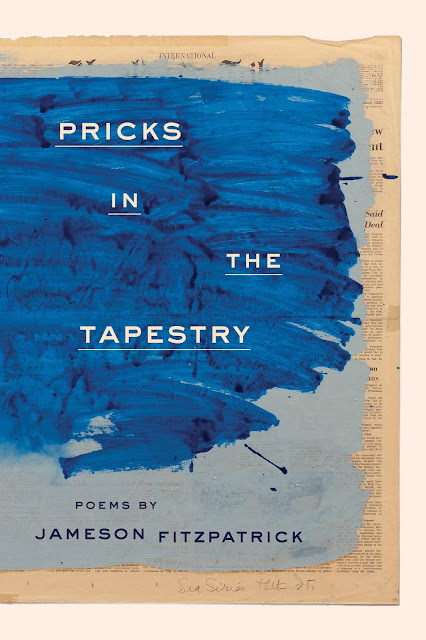 There is some remarkable clarity and wisdom in his lyric, and this is a powerful debut, on the heels of two chapbooks: Mr. & (Indolent Books, 2018) and Morrisroe: Erasures (89plus/LUMA Publications, 2014). Fitzpatrick is capable of some incredible precision, even as his poems unfurl to stretch into and cover vast distances. His meditations are exploratory, a curious blend of meandering and incredibly precise essay-poems inching thoughtfully through the beauty, imperfections and traumas, attempting to arrange or rearrange his own thinking, perhaps, into less damaged structures.

Fitzpatrick might be considered a hopeless, or even relentless, optimist: the world can be dark, but we don’t have to be, which in turn, might allow such darkness to fade from the world, or become, at least, a protection against it. As he himself has suggested, his poems exist on a fine line between hope and hopelessness, engaging both sides of the coin so that one might better understand the whole. His poems are smart and playful, yet rife with dark elements such as nightclub shootings, homophobic violence and erasure, such as the incredibly powerful “A Poem for Pulse,” a poem that acknowledges the June 2016 shooting at Pulse, a gay nightclub in Orlando, Florida, that killed forty-nine people and wounded fifty-three. His poem writes: “What a strange power to be cursed with: / for the proof of men’s desire to move men to violence. / What’s a single kiss? I’ve had kisses / no one has ever known about, so many / kisses without consequence— / But there is a place you can’t outrun. / There will be a time when. / It might be a bullet, suddenly. / The sound of it. Many.” It might be hard to consider an elegy composed to acknowledge the homophobic violence of a nightclub shooting to be a poem that includes any element of optimism, but the three page poem ends with:

Love can’t block a bullet
but neither can it be shot down,
and love is, for the most part, what makes us.
We will be everywhere, always;
there’s nowhere else for us, or you, to go.
Anywhere you run in this world, love will be there to greet you.
Around any corner, there might be two men. Kissing.

Posted by rob mclennan at 8:31 AM
Labels: Birds/LLC, Jameson Fitzpatrick