We live in the most fortunate of times.
And who’s to blame. Our moods like
the four seasons in a tinted window
overlooking a bank robbery. Everyone
is raising children on cable television,
on leashes, on the slot machines that
have become our elegies. We live
other lives in high school, college, on
the porch reading obituaries. Say I
miss you into the mirror while shaving,
brushing teeth, plucking something
that’s meant to grow forever. 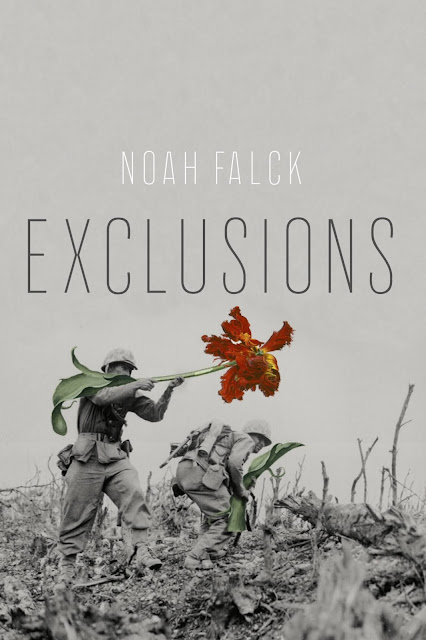 I’m pleased to be able to go through a copy of Buffalo, New York poet Noah Falck’s second full-length poetry collection, Exclusions (North Adams MA: Tupelo Press, 2020), following his debut collection, Snowmen Losing Weight (BatCat Press, 2012). Through fifty-five short bursts of lyric inquiry, Falck composes a sequence of exclusions, from “POEM EXCLUDING TAXES,” “POEM EXCLUDING LANDFILLS,” “POEM EXCLUDING WITNESS” and “POEM EXCLUDING DEATH.” While there are elements of Falck’s poems that attempt to articulate the spaces around the shape of what is missing, each poem could, alternately and simultaneously, be completely straightforwardly titled as poems about just about anything or everything, all but that one specific exclusion. Are these poems titled as descriptors or red herrings? The press releases suggests these are poems built around subtraction, but instead, I would suggest that certain poems are constructed around absence, while others exist purely as deflection. “If this were in color, we would / only see red. We would reconsider / our last requests, and let or organs / decay in silence. Become the weather / that repeats and repeats / in another geography.” (“POEM EXCLUDING COLOR”).

Each poem is composed via a handful of sentences, each new line presenting less a twist than a sharp turn, allowing the poem to be constructed via the reader’s associations and connections, such as the three sentences he constructs to build the piece “POEM EXCLUDING PARKING METERS,” that reads: “We index our love / on a street corner / crowded with a seething arrangement of people / in mall wear. Your face / is October in another city / that’s lost its mojo where / night comes down like a right fielder / in foul territory during post league / play. Teenagers can’t get drunk fast / enough is what you think of / when you think of home.” There is something curious in the effect of a poem that builds, not towards an inevitable conclusion, but to a completion, having managed that final part of a particular whole. As well, there is something reminiscent here of Ottawa poet Stephen Brockwell’s work, in the lyric patter and patterns, as well as the larger project of “exclusion,” which Falck discussed in a recent interview at Neon Pajamas:

Exclusions plays with the idea of leaving out, which in some ways came from the strong urge to build poems that held everything inside them. I’ve been interested in that idea for many years. Put everything in a poem. The parking lot, the politics, the shower scene, the tourists. The exclusionary idea really acts as an emphasis for the reader. It gives them a stepping stone into the poem. It’s up to the reader, as it always is, to decide where they want to go / how they want to read the poems. Do you focus on the excluded or wander through the outskirts with the children and the snowplows? Either way, I hope the poems offer up a chance to have some rhythm in the mind.