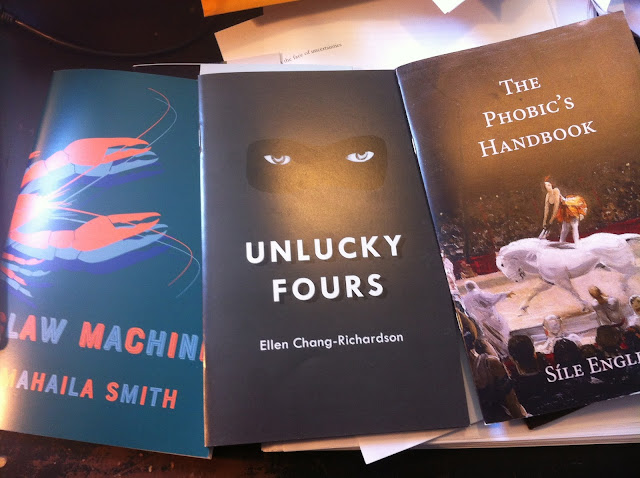 I’ve said before that I’m rather fond of the books produced by Jim Johnstone’s Anstruther Press: the poems within are often very good at what they are attempting to do, and occasionally, my interest in what is possible in a poem overlaps with theirs. My own bias notwithstanding, there are books here worth paying attention to, and authors here worth following. Anstruther also often produces first or early chapbooks by Canadian writers, allowing emerging poets the opportunity to stretch out a bit in a small space, beyond that of the poem or two in a literary journal. Ottawa-based Ellen Chang-Richardson’s debut is Unlucky Fours (2020), an eight-part sequence of inquiries and hesitations around origins and familial histories, and how far their reach extends, and how much we allow those stories to impact on our own. There is much suggested in this poem, more than the poem has space for, but she manages to present just enough of her questioning to allow the empty space to envelop.

They say that this is what it means to be Canadian:
a rite of passage, practiced rote through our parents’ histories.

London, Ontario poet Síle Englert’s second chapbook, after Threadbare (Baseline Press, 2019), is The Phobic’s Handbook (2020), writing out a lyric suite of eleven fears: “Coulrophobia,” “Frigophobia,” “Ornithophobia,” “Hominophobia,” “Venustraphobia,” “Disposophobia,” “Lalophobia,” “Cygnophobia,” “Odontophobia,” “Xylophobia” and “Ideophobia.” The poems are curious articulations and explorations of lesser-known phobias, from the “fear of coldness” and the “fear of disposing of items” to the “fear of men.” “The stolen red mitten becomes a metaphor for every absent thing.” she writes, as part of “Cygnophobia.” This is an intriguing suite of poems, and there are moments that I wish she could have gone further, deeper. Are there more to this series? How far could she go with these? Part of me wishes she would write thirty more poems around these fears, and then excise the weaker poems, to see what she might be left with. I think there is a lot of potential here, and some good moments, writing around and through a variety of fears, of phobias. As she writes to end the poem “Disposophia”: “if you feed them, they multiply.”

I’ve run out of ways to write beautiful on walls.
Drained the ink from calligraphy pens,
liquid hourglass of swoop and curl
scrawling, only breaking
at doorways.

Moth-eaten synonyms are many-mouthed like doormats
under the weight of minutes and shoes.
Tried on, cast off. I see the stars
blinking through their holes.

Embroidered on a body with my woman’s hair:
a spectrum of brittle, coloured threads.
Coarser where the weather touches
too much. Stich beautiful with these
in my schoolteacher cursive.

It was swallowed more times than spoken.
Jagged edges, bits broken off
by teeth or fingernails—
how stone decomposing into sand
is eventually glass.

Originally from Ottawa but currently in Toronto is Mahaila Smith, whose debut is Claw Machine (2020), a collection of first-person lyrics constructed out of an intriguing blend of direct and indirect lines. “I uploaded the family photo album to the Cloud.” she writes, to open the poem “BACK HOME, LYING IN MY TWIN BED,” continuing: “Time focused without, before me.” Each poem explores a small scene or a small moment. In deeply attentive and focused poems, everything else falls away, but for the small moment that claims her attention; opening large, her poems contract until there is nothing else but for those final lines, the whole of each poem aimed there. There is something indirect about her directness that intrigues. It makes me curious to see what she might do next.

Noisy inside, I choose amber beer,
drink and wait for a friend, friends,
loud music, lights, a movie with a talking duck.
Wait and see you through the front window:
Are you coming in?
Sitting in a booth,
I’ve brought someone you should meet.
A man takes a photo behind us,
pushing crocodile mouths closed.
Across the floor we shoot green plastic soldiers
and exploding oil cans,
loadingreloading,
step back and see the whole labyrinth.
Step forward and break down crumbling mortar.