DELETE THE DELETIONS. TAKE THE FROSTED PINK HAND IN YOUR OWN HAND. BROWN-HANDED, STOP THIS NONSENSE.

Stop counting to 57. Part of the count is your own premature demise. Your, you. Is the third person about trauma, about narrative being the thing “that has already happened.” (M.) I am 48 years old. If my hair and body glow in the sun, then it is also true that I don’t think I am a poet anymore. Perhaps I am not interested, as I once was, in the life of the poet. Balcony life: sex with white poets, coffee by the window. The fetish of the gel tip pen or the pencil carved to a chalky point. It’s why I prefer the notes, but the politics of the notes are too expansive. Non-verbal experiences don’t lodge easily: there. Social life in the continental U.S., where I live, or Delhi, where another life awaits, glimmering, steaming off, is not accounted for: here. Racism and misogyny appear nowhere in my complex note-taking method, for example. Where did they go?

A stain blooms on the sidewalk, in city after city, for example. A pavonine sheen in its slick. We gasp to see it, the rainbow, then retrain our feelings on the spot.
We look away. 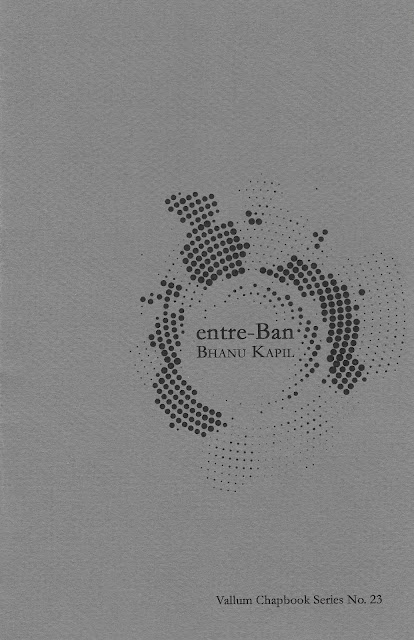 A while back, Vallum magazine, as part of their Vallum Chapbook Series, released Colorado poet Bhanu Kapil’s latest title, the chapbook entre-Ban (Montreal QC: Vallum Chapbook Series No. 23, 2017). According to the back cover, “entre-Ban is a collection of notes taken by Bhanu Kapil during the writing of her 2015 book, Ban en Banlieue. Inside are deletions, dedications, invitations, the smell of burnt hair, caves, violence.” The idea of notes responding to one’s own writing as a writing project is one I’ve been long fascinated by, and is comparable to Leonard Cohen’s own Death of a Lady’s Man (Toronto ON: McClelland and Stewart, 1978) or Ken Norris’ THE COMMENTARIES (above/ground press, 1999). As she writes to open the title poem: “To be entre-Ban is to be ‘Ban-like.’” Her author bio, also, offers that “Her current long-term projects include a re-writing [emptying out] of ‘Ban’—of which a succession of mutations and deletions are included in this chapbook.” I’m fascinated by the way her prose flows across a poetic non-fiction landscape, writing out a series of details, sketches, reading notes and personal details that map out an incredible system of connections, contusions, considerations and consequences.

Given I’ve not yet read Kapil’s Ban en Banlieue (Nightboat Books), something I clearly need to rectify (despite having her name on my radar for some time, this is actually the first title of hers I’ve seen), meaning I can only see this work as entirely self-contained. The effect of her writing is absolutely fascinating, writing on a series of dislocations, including being an immigrant and the child of immigrants, racism, colonialism and travel, as well as a series of personal details, shifting from the global to the intimate in quick succession. As the fourth section of the poem “57 Deletions [Mutations] for Ban [4]:” writes:

Something yellow next to the glass. A raised boundary of earth. Ban has left her house and run. Through the streets to get here. A mere ten minutes away. Where the rain has begun to fall lightly, like icy sugar, through the branches and leaves. And it’s here that Ban lies down, neglected, but also alert, grasping something, the changing light, like a vine. Or an antique rose. Descending, she’s also tasting. Out slips her lime green tongue. This, for example, is the wet, silky, tamper-proof smell of smoke that Ban has carried into the forest. In the folds and creases of her creamy skin, the smoke sets. I note her dangerous expression and also her uniform, which is pink and white in summer, and maroon come the Autumn term.