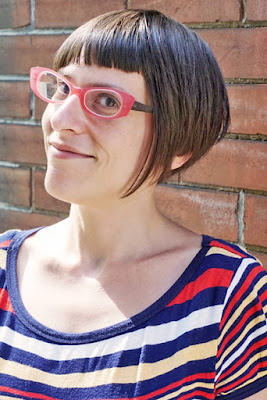 Shari Kasman is the author of a collection of short stories entitled Everything Life Has to Offer. Her work has appeared in Joyland, Taddle Creek, and This Magazine. When not writing Shari works on art projects, and from time to time she teaches piano. She spends most of her time in Toronto.

1 - How did your first book or chapbook change your life? How does your most recent work compare to your previous? How does it feel different?
My first book put my name inside the Toronto Public Library’s website. Most recently I’ve made stories tinier than the ones in my collection, so now my work feels bite-sized.

2 - How did you come to fiction first, as opposed to, say, poetry or non-fiction?
I actually came to fiction second. I’d been working on non-fiction prior but have never completed anything in the form of a book.

3 - How long does it take to start any particular writing project? Does your writing initially come quickly, or is it a slow process? Do first drafts appear looking close to their final shape, or does your work come out of copious notes?
Sometimes it’s fast, other times slow. Some drafts come out of thin air, others come from notes. I have many notes in many notebooks. Some notes are more decipherable than others and some of the decipherable notes go into stories.

4 - Where does a work of fiction usually begin for you? Are you an author of short pieces that end up combining into a larger project, or are you working on a "book" from the very beginning?
It begins either with an idea or from writing words and continuing to write words until a story materializes. When I started writing stories, I didn’t know I’d assemble them into a book. I’ve never made anything longer than a short story.

5 - Are public readings part of or counter to your creative process? Are you the sort of writer who enjoys doing readings?
I like readings because I read things that I think are funny and often other people think they’re funny as well, so they laugh, and I like when people laugh at funny things I’ve made (if I think those things I’ve made are funny also). If something seems off in a reading, I might tweak the story to make it more readable. It seems like most people reading stories like stories to be readable.

6 - Do you have any theoretical concerns behind your writing? What kinds of questions are you trying to answer with your work? What do you even think the current questions are?
Maybe I should be concerned that I don’t have theoretical concerns. I’d like to answer the question: Will this thing be interesting or entertaining to me and if so, will it be interesting or entertaining to anyone else?

9 - What is the best piece of advice you've heard (not necessarily given to you directly)?
Turn off the internet.

10 - How easy has it been for you to move between genres (short fiction to artwork to music)? What do you see as the appeal?
It’s very easy. It’s so easy that sticking to one thing is a challenge. It’s tempting to work on projects in disciplines other than whatever happens to be the current focus. But I work on projects in different disciplines concurrently and like to make projects that combine elements from different fields. The appeal? I have too many ideas for various things and need to do something with the ideas.

11 - What kind of writing routine do you tend to keep, or do you even have one? How does a typical day (for you) begin?
I begin the day with coffee. Then I swim and work on projects afterwards. If it’s a non-swimming day, I write in the morning. The routine is flexible and leaves plenty of time for breaks from writing. It’s more like a loose plan, less of a routine.

12 - When your writing gets stalled, where do you turn or return for (for lack of a better word) inspiration?
If stalled I work on a different project and go back to a writing project later. I don’t often get stalled, though. I have too many ideas.

13 - What fragrance reminds you of home?
The scent of indecision.

14 - David W. McFadden once said that books come from books, but are there any other forms that influence your work, whether nature, music, science or visual art?
Everything is an influence. Everything! But I don’t necessarily know what’s an influence until after something’s written and I realize something has been an influence in retrospect.

15 - What other writers or writings are important for your work, or simply your life outside of your work?
I like Aimee Bender and Jean-Philippe Toussaint. I like Richard Brautigan and George Saunders and Ben Lerner and Julie Hecht and Lorrie Moore and I like when words and pictures go together. There’s this book where David Berman’s poems go alongside photos by Michael Schmelling. I like that.

16 - What would you like to do that you haven't yet done?
I’d like to improve at communicating in Spanish. I’d like to figure out how to get the slugs not to eat all the kale and lettuce in my garden. I’d like to ferment new foods, maybe make kimchi or tempeh. I’d like to make other things I’ve never made before, perhaps out of paper or colours or sounds.

17 - If you could pick any other occupation to attempt, what would it be? Or, alternately, what do you think you would have ended up doing had you not been a writer?
I went to music school and taught a lot of piano and now prefer a small amount of teaching, so I only teach a little. I thought I might do something more with music, then started to work on art projects, but didn’t consider writing books. Writing fiction came after music and other things, including children’s entertainment. I don’t want to attempt another occupation. Imagine if I had to work in a cubicle! I wouldn’t last.

18 - What made you write, as opposed to doing something else?
I thought I’d be doing something else but when I complained to a friend about teaching too much piano, she suggested I write. I think she’d read some strange emails I’d written and thought fiction would be suitable. So I took her advice.

20 - What are you currently working on?
I’m drawing some pictures that will be enlarged and hung outside on the sidewalk in my neighbourhood in Toronto and I’m working on a couple of books that contain both pictures and text.

Posted by rob mclennan at 8:31 AM
Labels: 12 or 20 questions, Invisible Publishing, Shari Kasman