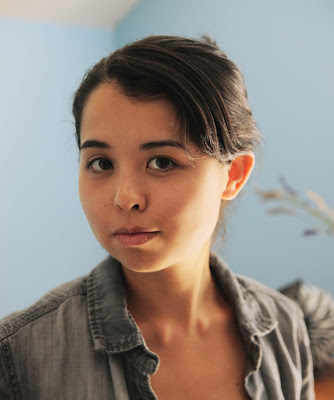 Laura Ritland’s poems have appeared in magazines across Canada, including The Walrus, CNQ, Maisonneuve, Arc Poetry Magazine, The Fiddlehead, and The Malahat Review. She is the author of the chapbook Marine Science (Anstruther 2016), a recipient of the 2014 Malahat Far Horizons Award for Poetry, and a 2018 Simpson Fellow with the Simpson Family Literary Project. She currently divides her time along the west coast between Vancouver and the California Bay Area, where she is a PhD student in English at UC Berkeley. East and West is her debut collection (Véhicule Press 2018).

I’ve been inspired and heartened by the support for this first book. I feel like a real citizen of the country of CanLit! I think the book has also allowed me to leave behind a certain set of themes and poetic approaches and to move onto something (I hope) different. My more recent work is longer, sparer, and weirder. Fewer adverbs. More nouns. It’s like starting again from almost nothing, and it’s wonderful.

I think fiction requires an understanding of people and society that I didn’t have starting out. I could also do things with poetry that I couldn’t with other forms, and with greater skill and freedom—distill abstract concepts, toggle between voices, create word images, play with visual space. I guess there was also something deeply consoling to me about how broadly and widely the tradition of poetry spans: across thousands of years and cultures. That permanence and prevalence of poetry hints at a common human need for meaning and pattern, perhaps.

It depends on the poem and how cruel it wants to be. Rarely but sometimes I get a poem right on the first try. For longer poems, I keep notes in the margins as I write to remind myself of the place I ultimately want to end up, especially when that place may be somewhere conceptually complex. I think, compared to other poets, I edit quite a lot. Most of my poems go through at least four or five distinct drafts, and many, many line edits.

I tend to work in pieces and scraps. I have a mark I might aim for, but I don’t tend to think of my poems as belonging to a single project; I try to just hope that an organic unity will emerge. Perhaps this will change now that I have a sense of how a book is actually structured. Since finishing East and West, I’m starting to think more in book-length units—what might be a core of a book, or its branches, and so on.

Readings are usually very affirming experiences for me—my co-readers inspire me, listeners are gracious, hosts are generous. They also make me realize how I show up, as a writer, in the world—the kind of persona that I portray when I get on stage. I find myself noticing how I read and how my poems read, and this in turn makes me wonder how I might do things differently (or not). If my experience is anything to go by, I sometimes feel like authors get more out of readings than even the audience.

In East and West, many of the poems ask how and if we communicate or understand each other despite our differences. But lately, I’ve been wondering if understanding even matters. The philosopher Ludwig Wittgenstein, for example, would say that it doesn’t matter; we have this thing called language, it works well enough, and so we should just get on with it and stop complaining about the incommunicability of experience for goshsakes. However, I still find myself thinking that despite the connectivity that language affords us, we might still have totally different experiences of the same event—through different experiences of class, body, gender, race, and so on. It amazes me how much misunderstanding can happen between people because of an inability (or perhaps just refusal) to respect this difference. I’ve sometimes felt that the best thing that can be done is to simply admit we can never completely or realistically feel what others feel. But this line of logic seems defeatist to me—and actually detracts from our responsibility to respond to others with empathy.

So, lately I’ve been wondering if there’s a third term amid all this. Something that is neither “me” and “you.” Something non-binary that doesn’t treat us as the totally distinct substances of self and other, matter and anti-matter. My hunch is that there’s a way to get at this third term in poetry, and it might have to do less with focusing on my experiences or the experiences of others. It has to do with finding the physics that make experience possible in the first place.

I think that writers, like any creative maker, have a responsibility to their society. Language is thought and thought informs social behaviours and beliefs. As writers, we have the very tools of thinking in our hands, which means we have the power to intervene in the cultural norms that perpetuate intolerance, oppression, and bigotry. We have the opportunity to make people think differently and to become open to difference.

I think that preserving the autonomy of art—when writers claim to keep their distance from political issues, for example—has is its merits and importance too, and I’d never want to see poetry become instrumentalized purely and solely for a political purpose. However, the “politics” versus “art” opposition that I often see in some strands of contemporary criticism seems false and misguided to me. Every work of art will have some relationship to the political, even if we don’t talk about elections when we talk about line breaks. Writers are political subjects, even if they don’t think about politics the way that politicians might. To my view, even the idea that artists should remain distanced from political concerns is already a social attitude: it might enact a desire to resist and critique a society by virtue of an attempted separation from it; or it might present a politics of individualism.

I realize that art’s inevitable political valence doesn’t necessarily evince our responsibility to the social. It’s up to the individual to decide how to be in the world, after all. But to me, to dismiss the importance of the writer in a culture or society only contributes to the belief in art’s powerlessness, and, in turn, licenses the abuse of power. It also seems like a dead end, creatively, if you believe that writing has no effect on the world beyond the page.

It’s definitely essential for me. I’m indebted to many editors—both during the composition of East and West and over the course of my development as a poet. My only difficult experiences with editors—or peers giving me feedback in general—have been when they don’t understand my work or can’t help wanting the poem to be something entirely different. But then, this isn’t the kind of editing that is useful or essential. When I find someone (or some sympathetic peers) who really gets my work and can provide constructive and insightful feedback, I hang on to them for dear life.

Do what matters most.

I try to write in the morning, when the brain’s fresh. But my day-to-day routine varies a lot depending on the other work commitments I have. Lately, it’s been swinging wildly between all-day writing to getting only a sentence on the page after days of other distractions.

I have a number of strategies. Usually, I put the poem aside and return to it the next day. Or, if I really hate what’s going on, I put it away for several weeks. Forgetting is sometimes the best strategy for forgiving the little thing(s) that I was hung up on—and I can appreciate the bigger picture of what the poem is trying to accomplish once I’ve gained some distance from it. I might also turn to some of my go-to poets to help me rethink my approaches. I often (re)turn to Elizabeth Bishop, for example, when I get too bogged down in the adjectives and details—her simplicity cuts through my unnecessities.

Visual art has always been a major influence on my poetry—in part because when I first began writing poems I was drawn to the imagists, but also because I am a (sometime, lazy) visual artist. I’ve also always been attracted to the tactility of words. I love thinking of poems as literally inked on a page.

I am indebted to more fiction writers than I can name: Woolf, Joyce, Conrad, Jean Rhys, Austen, George Eliot, Forster, Zadie Smith, Munro, and Madeleine Thien to name a few. Perhaps as a function of finishing a book of poetry, I’ve started to get back into writing short stories. Critical essays have also become an increasingly important form for me; they help me think between literary forms, philosophy, and the larger world. To name a few works that have particularly preoccupied me this past year: T.S. Eliot’s essays on aesthetic criticism; all of Sara Ahmed’s work; Don McKay’s Vis-à-Vis; Jeff Chang’s We Gon’ Be Alright; Erin Wunker’s Notes from a Feminist Killjoy.

To write a really, undeniably, terrifically good book—a book that I’ll feel in my heart of hearts to be perfect.

If I wasn’t a writer, I’d have liked to have had a real attempt at being an artist. Looking back, there were insurmountable fears I had about art school that were perhaps founded, perhaps unfounded. But it’s the path not taken that I wonder most about.

Sheer tenacity, I guess. And an unwillingness to define myself in any other way. It’s funny, I don’t think I’m intuitively good at writing. But I’ve stuck with it, maybe because I’m just stubborn.

The End, By Anna, by A. Light Zachary. Black Panther.

A long poem set in Berlin and (perhaps) California.