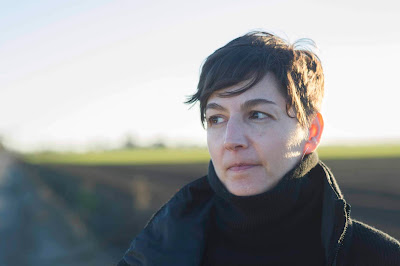 Valerie Wallace’s debut poetry collection House of McQueen (March 2018) was chosen by Vievee Francis for the Four Way Books Intro Prize in Poetry. In their starred review Publishers Weekly said that Wallace created “…a literary seance…serving as a scholar of and medium for the late iconic fashion designer Alexander McQueen….” Her work was chosen by Margaret Atwood for the Atty Award, and she has received an Illinois Arts Council Literary Award and the San Miguel de Allende Writers Conference Award in Poetry, as well as many grants to support her work, for which she is extremely grateful.

1 - How did your first book or chapbook change your life? How does your most recent work compare to your previous? How does it feel different?
HOUSE OF MCQUEEN was published 5 months ago (March 2018) and it’s afforded me the opportunity to travel around the country and to London, see far-flung friends, and meet some wonderful new friends.

The poems I’m writing now aren’t about Alexander McQueen obviously, but I’m still interested/invested in form. My newer poems have a bit of nature in them, and often speak to contemporary events.

2 - How did you come to poetry first, as opposed to, say, fiction or non-fiction?
My first piece of writing was a short story about ants, led by an ant named Mrs. Rodriguez, which I remember feeling was the most beautiful name. I was about nine.

But ultimately poetry’s economy of words and embedded musicality are what likely drew me to it, and still keep me close.

3 - How long does it take to start any particular writing project? Does your writing initially come quickly, or is it a slow process? Do first drafts appear looking close to their final shape, or does your work come out of copious notes?
My poems go through tens of drafts. Most of them, thankfully, look and read very differently from their initial impulse.

My first book started out as an exercise – an assignment I gave myself to write about someone unlike me – and a subsequent obsession with McQueen’s work coupled with occasions (of residencies) to give my complete attention to the project meant that the poems, while not super-quick, came steadily.

4 - Where does a poem usually begin for you? Are you an author of short pieces that end up combining into a larger project, or are you working on a "book" from the very beginning?
Poems often begin as lists although sometimes I guess they are also paragraphs. I think it depends on what the poem is going for.

With HOUSE OF MCQUEEN, I figured out fairly early in the process I might have a book. But now, I’m just happy when I complete a single poem. I’m not sure where I’m headed.

5 - Are public readings part of or counter to your creative process? Are you the sort of writer who enjoys doing readings?
I love doing readings. I love to see if I can convey something of the poem’s emotion and meaning to the audience. Readings of newer work also help me hear infelicities that I can attend to later – of language, form, spacing. That’s probably not fair to the audience, but I do like to read aloud to help me with final drafts.

6 - Do you have any theoretical concerns behind your writing? What kinds of questions are you trying to answer with your work? What do you even think the current questions are?
I’m trying to make sense of the world, to find its beauty, to find shared humanity.

7 – What do you see the current role of the writer being in larger culture? Does s/he even have one? What do you think the role of the writer should be?
Writers have a responsibility to craft fine and useful writing, of being supportive of other writers, of making art. And like everyone else, to be decent human beings to each other.

8 - Do you find the process of working with an outside editor difficult or essential (or both)?
I’m not sure what is meant by an outside editor. An editor not in my head? Then yes, I find it essential. My first book would not be where it is without the eyes and ears of other poets and writers who were not poets, on its pages.

Also, get a good haircut.

10 - What kind of writing routine do you tend to keep, or do you even have one? How does a typical day (for you) begin?
I write best when no one else is home. I putter around a bit and then sit in my big purple chair with a large blank notebook. Or at my desk, or the kitchen table because the light is good. I try to write at different times of the day, to keep my mind ready.

If I’m in the middle of a poem and can’t think of a word, I’ll take a walk without headphones and carry a notebook. Or I’ll take a nap with a notebook beside my bed. Those two activities, I find, support the writing process very well! And I don’t want to talk with anyone until the poem is done, or I’m done with it for the day.

11 - When your writing gets stalled, where do you turn or return for (for lack of a better word) inspiration?
I like to read poets I haven’t yet read.

12 - What fragrance reminds you of home?
My husband’s shirts.

13 - David W. McFadden once said that books come from books, but are there any other forms that influence your work, whether nature, music, science or visual art?
I sometimes listen to Bach or Maná while writing, but in terms of influence, I’d say dance. I’m very taken with the discipline of dancers to achieve not only their physicality, but the story they tell in even the smallest gestures.

14 - What other writers or writings are important for your work, or simply your life outside of your work?
I like to read interviews – artists, business people, writers, politicians, and history. Perhaps for those reasons, I also enjoy a lot of podcasts. Those are writings, but they are words…I also love to go to readings, and talk one-on-one with other writers and artists.

15 - What would you like to do that you haven't yet done?
Write a second book and a third book.

16 - If you could pick any other occupation to attempt, what would it be? Or, alternately, what do you think you would have ended up doing had you not been a writer?
In addition to being a writer, I work in digital communications and administration, and I also teach English, literature, and creative writing. BUT. I have always thought that if I weren’t a writer, I would want to be a set designer. Set design done well and inventively is terribly exciting, don’t you think? Once I saw a Tennessee Williams play where it rained. Rained! But more than something startling like that, I’m taken with set design that advances the narrative and the characters.

17 - What made you write, as opposed to doing something else?
Because I cry and feel terrible if I don’t do it.

I love movies and films but presently I’m addicted to the series The Handmaid’s Tale on Hulu.

19 - What are you currently working on?
Staying healthy.