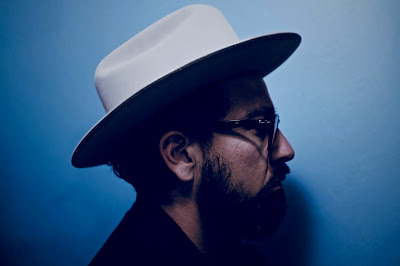 LM Rivera lives in Santa Fe, NM. He co-edits Called Back Books with his partner Sharon Zetter. His work has appeared in Alien Mouth, FUZZ, Mannequin Haus, DUM DUM Zine, and elsewhere. His chapbook THE LITTLE LEGACIES is available from Glo Worm Press and his first full-length book, The Drunkards, is available from Omnidawn.

1 - How did your first book or chapbook change your life? How does your most recent work compare to your previous? How does it feel different?
As grateful as I am, I wouldn’t go so far as to say that The Drunkards being published has “changed my life.” But, if I was forced to think of its publication as transformative, I could only confidently say that it being in the world is a further incitement, in terms of the seriousness, the necessity, and the absolute obligation of the everyday work that hauntingly remains.

And… I am always and only concerned with orientating myself to the unfolding and irrational state of being through language (Irrational Realist that I am). In this way, the work has remained quite the same (the rest is window dressing and aesthetics—with slight metaphysical acumen shifts earned and learned over time). Again, the emphasis is on work and the work at hand.

2 - How did you come to poetry first, as opposed to, say, fiction or non-fiction?
Poetry was last. Narrative (in the tradition of the novel) came first. Then essay (in the loosest sense). Then philosophy. Then collage (and other assorted fine arts). Then film (which I studied academically). Then, finally, poetry (the last refuge of scoundrels and the only home I’ve found for the mad outpouring of an ontologically infused language/speech/scream/prayer/madness).

3 - How long does it take to start any particular writing project? Does your writing initially come quickly, or is it a slow process? Do first drafts appear looking close to their final shape, or does your work come out of copious notes?
I’ve been working on three books for my entire writing life. The Drunkards was the second one. My first book was a failure and remains hidden. And the third will hopefully find a home someday…

The writing happens at a rapid pace but the editing and the neurosis takes years to get through.

First drafts are the unrecognizable ravings of a simpleton. God, I hope what comes after isn’t what it once was.

4 - Where does a poem usually begin for you? Are you an author of short pieces that end up combining into a larger project, or are you working on a "book" from the very beginning?
My predictability knows no bounds. Almost the entirety of my writing comes from notes taken when reading, watching film, listening to music, etc. I sit and meticulously go through whatever is being witnessed/examined and take notes by numerical order. I transcribe those notes, through the aforementioned state of madness, and the result is the thing which we’ll call: a book.

Despite contrary claims, a writer (one worth their salt) only works on and in a book. There is no outside of the book.

5 - Are public readings part of or counter to your creative process? Are you the sort of writer who enjoys doing readings?
Because I don’t read in public, for a slew of reasons and rationalities, I don’t really know how to answer this question but it’s not that I think reading in public is “counter” to my “process”—it’s simply a non-existent component…

I have been making, for over a decade, short films—in tandem with poems and considerations of the like. At the book’s debut reading, a short “film” of mine was shown. I hope to do much of the same—if someone will allow it. Most poets want to be something other than a poet—a filmmaker is my illusion.

6 - Do you have any theoretical concerns behind your writing? What kinds of questions are you trying to answer with your work? What do you even think the current questions are?
I have theoretical/ethical/existential/theological/psychological/aesthetic concerns of my own but whether or not the work is willing to deal with my mundane concerns, this I’m unsure/doubtful of.

And… I am, post de facto, simply trying to read my work with an attention to detail and critique but how it got this way remains mostly mysterious to me. That’s not to say that I am an anti-intellectual because much cognitive strain happens before and after the event of writing. This cerebral web is intricate, rational, coherent, and predictable. But, at the very moment of writing, an elusive possession takes place and I wouldn’t know how to begin to explain it as anything other than being possessed.

“Current questions” are dubious and suspicious. Perennial questions in a book of questions, that’s the ticket.

7 – What do you see the current role of the writer being in larger culture? Does s/he even have one? What do you think the role of the writer should be?
The only commanded role I see for the writer is to write while avoiding self-aggrandizement and false piety (these are the traps of sentimentalism and melodrama). Of course, if you are made of sublime alchemy like an Anne Carson or an Aaron Kunin or a Jay Wright: then who knows how the call comes to them. I’m not so fortunate, so I just keep working and I try to stay out of the way of the words.

8 - Do you find the process of working with an outside editor difficult or essential (or both)?
An editor is essential but it has got to be a good one—one you trust. And never give in to what you must keep. Being published is never worth as much as you think it is. An editor or a confidant could save your work but, as Goethe knew all too well, if you heed every editing word, you’ll be left with nothing—nothing worth saving.

9 - What is the best piece of advice you've heard (not necessarily given to you directly)?
You do not need to leave your room. Remain sitting at your table and listen. Do not even listen, simply wait, be quiet, still and solitary. The world will freely offer itself to you to be unmasked, it has no choice, it will roll in ecstasy at your feet. (Franz Kafka)

10 - What kind of writing routine do you tend to keep, or do you even have one? How does a typical day (for you) begin?
I could say… but I’m hyperbolically superstitious when it comes to this sort of matter. I do start the day with reading, somewhere in the middle is cinema, and in the end there is a voice of some kind. The rest will be silent.

11 - When your writing gets stalled, where do you turn or return for (for lack of a better word) inspiration?
To the Other, always to the Other.

12 - What fragrance reminds you of home?
Whatever the combinatory smell is of New Mexico, Berkeley of the early 2000’s, Bay Ridge, and Sicily (if I take the question literally). If I don’t: smoke and only ever smoke.

13 - David W. McFadden once said that books come from books, but are there any other forms that influence your work, whether nature, music, science or visual art?
I can’t think of anything, of definite interest, that does not, in one way or another, enter in—film, painting, philosophy and music most of all.

14 - What other writers or writings are important for your work, or simply your life outside of your work?
Being a bibliophile makes this question impossible to comprehensively answer. But Dickinson, Milton, Nietzsche, Hemingway, Faulkner, Stein, Socrates, Dostoevsky, Levinas, O’Connor, Morrison, Carson, Buber, Freud, Bloom, Ellison, McCarthy, Ashbery, Jung (a recent addition), Shakespeare, and Saint Franz Kafka are eternally and pervasively therein. To name a few…

15 - What would you like to do that you haven't yet done?
I would like to write a novel that no one would read because no one would publish it. I think I could be quite good at that.

16 - If you could pick any other occupation to attempt, what would it be? Or, alternately, what do you think you would have ended up doing had you not been a writer?
If I didn’t choose the writing life, I would have been nothing. Likely,  the situation would have been bad enough to cause a chaos of the worst kind. Writing saved my life.

To combine the writing and the filmic is a kind of fever dream.

17 - What made you write, as opposed to doing something else?
If I can do anything well (and this is unknown) it’s writing in the slipstream. Perpetual impotence lays outside of that.

I’ve been deliberately and slowly going through Bela Tarr’s oeuvre (which I know well). I think Tarr is our era’s Tarkovsky (I’m likely not the first to say this). Also, I have to say, Claire Denis is always on my mind and always on the screen in my skull.

19 - What are you currently working on?
Better not to say…