i get it. your body is blah blah blah percent water. oceans levitate, clouds urinate on the ground that grows our food. this is considered a miracle – this is a problem of language. i could go on for days with facts about the ocean and it will always sound like i’m talking about love. i could say: no man has ever seen its deepest trenches, we know less about its floor than the stars, if you could go deep enough all your softest organs will be forced out of your mouth. you can be swallowed alive and no one will hear a sound. last summer three boys drowned in the sound and no one remembers their names, they came up white and soft as plastic grocery bags. i guess you could call that love. you’d be wrong.

The first I’ve seen by Bay Area writer, editor and educator sam sax is the poetry collection bury it (Middletown CT: Wesleyan University Press, 2018), winner of the 2017 James Laughlin Award from the Academy of American Poets, and a follow-up from his debut, Madness (Penguin Books/National Poetry Series, 2017). sax’s writing is both casual and visceral, accomplishing a taut precision alongside a comfortable looseness, with a blend of stark straightforwardness that can’t help but lyric across its own unique melody. “it’s not that we’re all born / genderless, though we are.” he writes, to open the poem “ULTRASOUND,” continuing: “rather, once we were all small / women inside our mothers. / something about science / & sex organs & hormones / & god.” 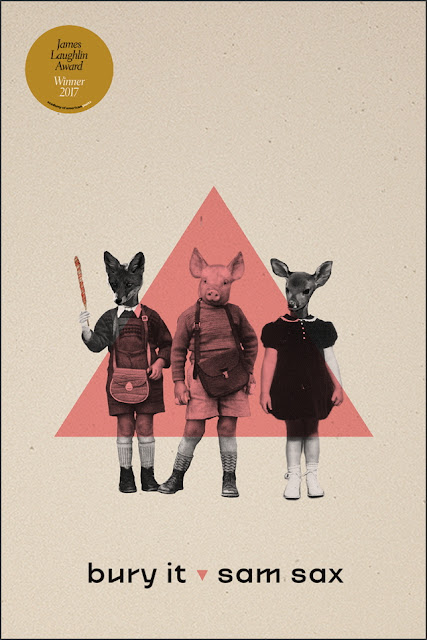 As the back cover writes: “sam sax’s bury it begins with poems written in response to the spate of highly publicized suicides of young gay men in the summer of 2010.” bury it, as this suggests, works to acknowledge and name those losses, while composing poems that celebrate life as much as meditate on death, grief and incredible loss. “i’m interested in death rituals.” he writes, to open the poem “BURY.” “maybe that’s a weird thing to say. / when i say interested i mean, / i’ve compiled a list.”

There is such a fascinating combination of rawness and pure craft to these poems, comparable to the work of Toronto poet Marcus McCann for sharpness and raw punch, or the work of Ottawa poet Shane Rhodes for writing both directly and elliptically around sex, death, queerness and politics. As sax responded last year, as part of an interview conducted by J. Mae Barizo and posted at The Rumpus:

I come from a long line of white queer Jewish writers who do a lot of work avoiding writing about the parts of their identities where they hold power. So it feels important to me to be intentional about all my various identities, to write honestly about whiteness and queerness and gender and class and mental health and addiction and Judaism at once, recognizing that I’m bringing all that to the page whether I address it or not; to try to historically and politically situate myself within my poems.