It follows the slug of bell tongue,
rattle against the apple
of an ox throat. Hoof after
hoof, breath cluffed,
is this how we are all yoked?
Death steps a tight circle
maintains the image of moving
forward, always pulling in
closer to the center
of this ancient structure,
lugging the rotation
of our hearts. It pulls in worship,
interminable ring of filling
its own fresh hoofprints, lifetime
spent dancing atop hay rot –
palpably wet, overwhelming.

DC-based Argentinean-US poet and translator Lucian Mattison’s second poetry title—after Peregrine Nation (Dynamo Verlag, 2017)—is Reaper’s Milonga (YesYes Books, 2018), a collection of performative, even theatrical, first-person narrative lyric poems. Taking its title from the “Milonga,” an Argentinian musical/dance style considered, among other things, a more relaxed version of the tango, the poems in Mattison’s Reaper’s Milonga explore cultural divides, politics, art and love, composed in the blur between commentary, lyric and essay-poem. As he writes as part of the poem “Election Day,” subtitled “Cordoba, Argentina”:

The shopkeeper sells beef milanesa
by the yard, our neighbors
son pisses on his lover’s bed

and for the third time
blames the dog. Tio Carlos
keeps saying, honesty

is a jail cell, crooks the wardens,
as election ads preen television screens
with images of grandmothers, 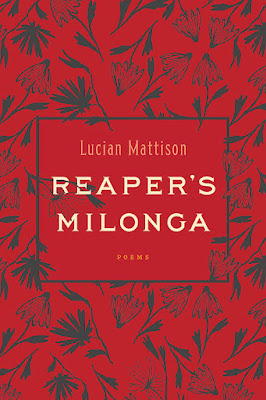 There is the occasional poem that falls a bit flat, such as “Homunculus” or “Death in Venice,” but on the whole, Reaper’s Milonga is filled with vibrant commentaries on culture, living and being, writing out a series of joyful, lively and precise poems that are highly astute, existing between and amid two powerful world cultures. As he writes in the poem “Circumambient”: “I still have yet to break / from this world of watching, // how the expanse in front of me / is actually the distending of my own chest, // distance between people more / a measurement of how small our worlds are.”