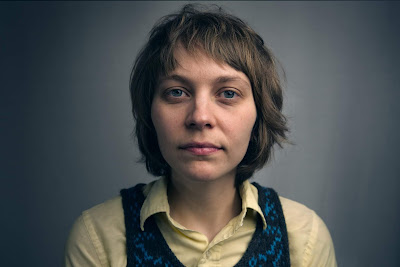 Carolyn Zaikowski is the author of the hybrid novels In a Dream, I Dance by Myself, and I Collapse (Civil Coping Mechanisms, 2016) and A Child Is Being Killed (Aqueous Books, 2013). Her fiction, poetry, and essays have been published widely, in such publications as The Washington Post, Denver Quarterly, The Rumpus, Entropy Magazine, Everyday Feminism, PANK, and Dusie. She lives and teaches in Massachusetts.

1 - How did your first book change your life? How does your most recent work compare to your previous? How does it feel different?
The act of holding my first book in my hand challenged a lot of self-doubts, at least for a few hours. Both books are pretty dark, fragmented, and hybrid-ish, but the first has the skeleton of a more recognizable narrative. The second is quite chaotic and, well, I sort of call it a novel to be annoying or subversive. Novel means “new” and I believe we need new types of textual bodies that attempt to mirror the experiences of bodies in society, particularly traumatized ones. Such bodies rarely inhabit a space that is linear or easy to comprehend.

2 - How did you come to fiction first, as opposed to, say, poetry or non-fiction?
I sort of just came to all words at the same time. I wrote and read in different genres going back to when I learned how to write and read. Words are my faithful buddy, just in general.

3 - How long does it take to start any particular writing project? Does your writing initially come quickly, or is it a slow process? Do first drafts appear looking close to their final shape, or does your work come out of copious notes?
The first draft of my second book, In a Dream, I Dance by Myself, and I Collapse, vomited itself out of me within the span of a few months, almost entirely in notebooks. My first book, A Child Is Being Killed, was a much longer process, and was directly informed by my studies/work in the field of trauma. My current unpublished novel is a much more traditional, linear fiction narrative and it tells a story that I’ve been repeatedly rewriting from scratch for maybe 15 years.

4 - Where does a poem or work of prose usually begin for you? Are you an author of short pieces that end up combining into a larger project, or are you working on a "book" from the very beginning?
It shows up and asks me to write it, and to just to start somewhere, anywhere, and it asks me to pay attention.

5 - Are public readings part of or counter to your creative process? Are you the sort of writer who enjoys doing readings?
I don’t always mind being in front of a crowd, but I don’t think readings should be an expectation. Some writers frankly aren’t good at it, and why should they be? Their expertise is writing, not performance. Writing happens on a page, I like reading it on a page, and I don’t always get a lot out of hearing others read because I have a hard time processing auditory info. I’ll still happily show up to support readers.

6 - Do you have any theoretical concerns behind your writing? What kinds of questions are you trying to answer with your work? What do you even think the current questions are?
What is trauma? What are bodies? Does anyone, any human or nonhuman, have a linear, clear body? How does that reality shake hands with the reality of constructing a book/text? What does it mean to be personally or socially or spiritually shattered—or not shattered? What are the different roles of both linear versus fragmented texts? Do we all have a basic core neurosis that forms our personal selves and the selves of our texts? When it comes to getting ourselves to not be such dicks, does art play a role?

7 – What do you see the current role of the writer being in larger culture? Does s/he even have one? What do you think the role of the writer should be?
Shaman? Witness? Ego? Overcomer of ego? Sacred and/or profane guide? Compassionate contrarian? Truth speaker? Liar? Purposeful failure? Lover? Friend? Decoder ring? Scientist of the mind/heart? Anarchist? Animal? Fool? Someone who dies and lives repeatedly, for various reasons? I recently read poet Yi Sang’s quote, “I believe that humans should be plants.” That seems about right.

8 - Do you find the process of working with an outside editor difficult or essential (or both)?
It obviously can be hard, but I’m unsure how it’s possible for writers—at least those who publish—to have polished pieces if they don’t get outside feedback. Writing happens when we’re absorbed in our own minds, which necessarily leads to blind spots, because we can’t ever fully see ourselves. At the same time, I really reject some of the things that are common in the (relatively new, yet somehow taken for granted) MFA workshop culture.

9 - What is the best piece of advice you've heard (not necessarily given to you directly)?
Well, on his deathbed the Buddha said to be your own lamp, to light your own path to liberation. And Thich Nhat Hanh says that when you eat an orange, be aware that you’re eating an orange.

10 - How easy has it been for you to move between genres (fiction to poetry to essays)? What do you see as the appeal?
I just like words. I’m not very worried about genre. I just trust whatever the words seem to want. I try as hard as I can to tune into that, and to notice when I’m hyper-identifying as a Certain Type of Writer. As a result, I’ve written poetry, fiction of all lengths, essays, articles/editorials, journals, picture poems, lyrics/music, hybrid work, instructions, incantations, fake interviews, Likert scales. This seems postmodern and maybe pretentious, but it’s something writers have been doing since the beginning of writing. One of the first written forms was basically a fiction poem, the epic poem. Or look at the educational chunks about sewers in Les Misérables that divert from fiction elements, or all the sprawling scientific guides that chop up Moby Dick. It’s worth considering why we casually think of those as pure novels. For some mind-blowing—I mean absolutely bonkers—texts that don’t fit into simple genres, read Margaret Cavendish’s The Blazing World (1666) and Sei Shōnagon’s The Pillow Book (990). This relative inattention to literary containers—that’s not something critical theorists and hipsters thought up.

11 - What kind of writing routine do you tend to keep, or do you even have one? How does a typical day (for you) begin?
I often doubt it when people claim they have one of those writer’s life routines you see in a Buzzfeed list. The expectation messes with people’s heads and discourages socially underprivileged people. The privilege needed to write every day is an elephant in the room. Writing routines, at least as they’re usually discussed, arguably have a connection to the psychology of capitalism. Writing is your job and your hyper-individualist identity; you only earn your title if you’re a Type A worker bee. If you’re not somehow strong-arming yourself into making a product, fire yourself. And, wouldn’t you know it, this is usually only something you can achieve if you have no kids, no sicknesses, no need for a full-time job or the decompression that requires, no social structures of gender or race stacked against your finances, psyche, or safety. I see so many of my students and friends get lost in some version of all this.

I go for months without writing. I’m 35 and have been writing since I was 5 and have become comfortable with the idea that writing is a part of how my life operates and that I’ll always come back to it. In those months, seeds are planted and growing. Space is being taken to let the overcrowded brain-rooms breathe. When I force ideas, they come out lopsided. I think of this metaphor used by Buddhist teachers of a plant that’s being neurotically watched and overwatered and dug up and replanted to see if the roots are okay. I’m convinced there’s a subconscious aspect to most good writing that requires patience and self-compassion, and that ignoring this leads to writer’s block, self-hate, and writing that doesn’t fulfill its potential.

12 - When your writing gets stalled, where do you turn or return for (for lack of a better word) inspiration?
I’ll read a lot or work on submissions. I meditate, which helps loosen my mind/heart and water seeds. But, as in #11, I usually don’t feel moved to always remind myself that I’m definitely a writer or to prematurely rip ideas from their wombs.
13 - What fragrance reminds you of home?
The tiny scent of those weird gray dusts from lottery scratch tickets, cat litter/fur/food, hummus, grass, dirt, tomato sauce.

14 - David W. McFadden once said that books come from books, but are there any other forms that influence your work, whether nature, music, science or visual art?
Bjork, music in general, the dharma, friends, personality typology, the cosmos/star-related things, all animals.

15 - What other writers or writings are important for your work, or simply your life outside of your work?
Kathy Acker, Selah Saterstrom, Bhanu Kapil, Claudia Rankine, Renee Gladman, Virginia Woolf, Kenneth Patchen, Toni Morrison, Antoine de Saint-Exupéry, Molly Gaudry, Claire Donato, Elena Ferrante, Clarice Lispector, Walt Whitman, Akilah Oliver, Kafka. My close writer friends Ben Hersey and Kate Senecal. Dystopia. Dharma texts. Marquez’s One Hundred Years of Solitude is, to me, an example of a perfect narrative. And the author most responsible for changing my life is Judy Blume, including that when I was 11 I wrote her a letter and she wrote me back.

16 - What would you like to do that you haven't yet done?
I’d like to see the aurora borealis and also start a revolution where I turn everybody vegan.

17 - If you could pick any other occupation to attempt, what would it be? Or, alternately, what do you think you would have ended up doing had you not been a writer?
I wanted to be a psychologist; that’s what I originally studied. I think seriously about someday becoming a death doula and am currently in the process of becoming a hospice volunteer. But in some ways, these are the same as being a writer.

18 - What made you write, as opposed to doing something else?
Intuition, not knowing really how else to successfully navigate existence, having an almost torturously spinning linguistic brain whether I like it or not, etc.

20 - What are you currently working on?
I’m currently in the process of acquiring an agent for my newest novel. I also have a poetry manuscript in progress which sort of revolves around things like incantations, repetitive secular prayers, and secret cosmic instructions.