I want to find the photograph
where we look like we’re in a song.
I want to pink it to the medicine cabinet.
I want to touch your knee
and have our home be the place
Where the piano doesn’t die.
Where the dancing is permanent.
Where each body in the party speaks
its own language
but each body still goes home
feeling understood.
I want to tell you how much the fear.
I want to tell you how wide the worry.
I want to promise you a beautiful thing
and have it turn out to be us,
even if that thing is not me.
I want to twist open the Saturday morning jam jar
with you at my shoulder
and have my fingers come away sticky
and lick them clean with you.
I want to each the too-sweet.
The sugar toothache.
The overripe. (“Ramna Safeer”) 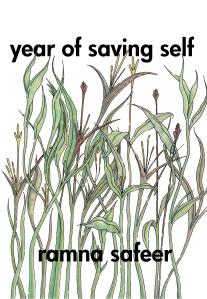 The second season of Vancouver chapbook publisher Rahlia’s Ghost Press [see my review of the first season here] include Ramna Safeer’s debut, year of saving self (2018), Meghan Harrison’s third chapbook, Amateur Hours (2018), and Molly Cross-Blanchard’s debut, I Don’t Want To Tell You (2018). With six poetry chapbooks under their belt so far, the editorial team at Rahlia’s Ghost seem to have a preference for the local, the emerging/debut, and the narrative lyric, with each publication so far composed as lyric first-person meditations set in narrative style. For “Pakistan-immigrated and Toronto-bred writer, activist and student” Safeer’s year of saving self, her poems write of her immediate, from her father and mother, resistance and resilience, the sweet taste of grapefruit and cultural attentions. Her bittersweet and lovely “The Smell of Fatherhood in July” opens:

My father has moved out of his body.
His voice has folded its laughter into a suitcase,
Plucked sweet words off the walls, and left.

The fog of death is in love with my family
and I have come to know the way she sings. Toronto writer and editor Meghan Harrison, author of the self-published chapbooks psychogeography and Pride Fight, writes with a rush and a push, composing her poems as a combination of meditations as well as a series of increasingly urgent statements, prose clarifications and short film scenes. As she writes to open the poem “Daddy Issues in Texas,” “There’s only one good father / in Dillon, Texas. No one seems alarmed.”

A room with a crossbreeze and long white curtains
somewhere deep and quiet in the Internet where it’s
impossible to tell whether the bluegrass outside
the window has pixelated. From here, we assign
updates to the registries. We are in the business
of purely professional tragedies—mainly racing
and film—but flickers of undomesticated
misfortune in one another’s eyes have been
reported. Some of us spook easily. Laminitis—
Euthanized. Pulled Up—Fatally Injured. The hallways
are floored with dirt, packed faultless. You may ear
the rumour of trumpets. My favourite thing to maintain
is the annual list of celebrity deaths, every bullet point
a hoofprint, the human names riding legendary speed
down to the footer where forgetfulness begins its work.
The same force that propelled history, turned
in the direction we deserve. As the tour groups
shuffle through, nametags bearing strings of numbers,
sometimes I hear them say, “I’ve never seen
anything like it.” That makes them like us: stewards
of a wildness that will deteriorate no matter how
carefully handled, the screenlight dissolving. (“Meghan Harrison”) 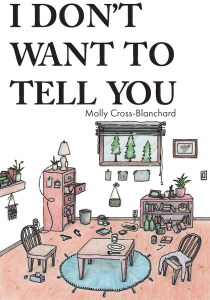 Vancouver writer Molly Cross-Blanchard’s debut, I Don’t Want To Tell You, the strongest of the three titles collected here, exhibits a swagger, a vulnerability and a confidence that is compelling, and a handful of poems that have quite the potential to strike, such as the pinpoint lyric accuracy of her poem “Puncture Wounds.” Also, she has a thing for thumbs, it would appear, given how often thumbs appear throughout only sixteen poems. In the poem “Exhibitionist,” she writes: “I want to be more / like the woman in Burger King / who eats her fries straight off the // floor, the woman who cries in Wal-Mart when / her pre-teen son says fuck you Mom / for the first time in front // of the front-door greeter.”

Home From A&W in Winter After Seven Beers

A girl in a pink tank top holds her shoulders
outside the frat house. Inside, someone shouts

fuck the patriarchy! and it warms us both. I want
to be invited in for a drink. I want a morning

when I walk myself across the quad without one shoe
or the other. What is a quad? I run my tongue

along the raw spot burned away
by a hot french fry. I’ve never been so ripe

for the picking. The girl in the pink tank top gets kissed
by a long-haired hockey boy and I think

of you. I hope the sad on my face looks cute
to the dudes playing flip cup on the electrical box. I hope

they want to save me from it. Who lit these streetlamps and why
do they love me so much? (Molly Cross-Blanchard)