In the 16th century, pilgrims on wanderings
were identified by fixed attributes:
the staff, the shoulder bag, the badges
on their broad-brimmed hats. I am not
a wanderer, but I ride on a lot of airplanes.
I do not usually recline my seat.
The aisle makes me feel less claustrophobic.
When I drive home from the airport
over the mountains in the evening there’s
fog again through headlights, more like gauze,
as if the entire town has been bandaged.
When I return home, I often think estuary
or why aren’t the curtains closed since
it’s night? When I return this time,
the pumpkins have collapsed in on themselves
on the porch and it’s raining. Like any
passing stranger, I can see clearly
into my own house. (“Peregrinus”)

Virginia poet Erika Meitner’s fifth full-length poetry collection—after Inventory at the All-night Drugstore (Anhinga Press, 2003), idEAL CiTiES (HarperPerennial, 2010), Makeshift Instructions for Vigilant Girls (Anhinga Press, 2011) and Copia (BOA Editions, 2014)—is Holy Moly Carry Me (Rochester NY: BOA Editions, 2018), a book that opens with a curious and meditative poetic prose-exploration of “Holy Moly” that includes “There are things I will never know. There are stories that are past telling. // no matter how much testimony we gather. No matter how many details we proclaim.” As her prose-exploration begins:

In The Odyssey there’s mention of a plant called moly, which is sacred and harvested only by the gods.

The gods are vengeful but they are also good to us, though we have given up sacrifices and burnt offerings.

With regard to burnt offerings, the following is a concise statement of the Levitical law: these were wholly animal, and the victims were wholly consumed.

The Animal Gang was a marauding group of hooligans who used potatoes studded with razor blades during pitched battles on the streets of Dublin in the 1930s.

Which is to say that the moley was an ordinary potato, its surface jagged with metal edges.

Because the oath might have been offensive to some, “Holy Moly” was used in the late 1920s as a jocular euphemism for “Holy Moses.”

Holy Moses is also a German thrash metal band, known for its lead singer Sabina Classen—one of the first and only women to use a death growl.

Moses demanded the release of the Israelites from slavery, and led them out of Egypt and across the Red Sea. After 40 years of wandering in the desert, he died within sight of the promised land.

In A Dictionary of the Underworld, ‘moley’ is preceeded by ‘mokker’—Yiddish for maker. (“HolyMolyLand”) 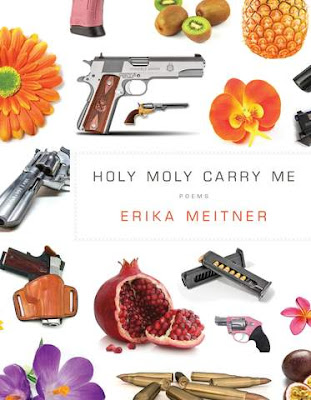 The poems in Holy Moly Carry Me are a combination of commentary and exaltation, critique and joyous celebration. As the back cover informs, her poems “take readers into the heart of southern Appalachia […],” and work through strains of deeply-set racism, small town diners, neighbours, children, religion and gun violence. Rich and vibrant, her poems revel in heart and impulse, and there is no detail too small to slip past her attention, such as the travel-notes of “On the Road,” that opens: “We are trying to get pregnant / so everything makes me weep:[.]” Her poems are long, lyric, and expansive, composed as declarations and field notes, reportage and deeply held beliefs. Her poems are heartfelt, broken and ragged, seeking redemption and even salvation (or at least a salve) where none might be possible; writing narrative stretches that attempt both understanding and redemption across the dark shades of the American canvas of gun violence, as she writes in the poem “Our Holiday Letter”: “Dear / friends. This year / has dragged like / a broken tailpipe, // all scrapes and sparks, / but I’m telling you, / though we’ve been // tested and tested, / most days, we still / feel blessed, and // wish you peace / in spite of our / hardships, and // maybe joy, / though yesterday / twenty children // were gunned down / in an elementary / school, and is there // anyone who isn’t / thinking about / every same weekday // morning—we wave / to the dark squares / of yellow bus windows // our only child rides / to a place where they / sing songs he’s never // heard.”