Nostalgia is a territory. Chain-smoking seagulls do yoga on the horizon at dawn. English Bay organized into lanes with flaming buoys for swimmers to do their drive-by banking. The bridge shut down for candidates who launch down the inlet on robotic wings, competing for votes. People tread water below to witness, swallow the new Pacific vaccine. The famous building with the tree growing out of its roof drinks rainwater, spits mercury into the teacups for developers. Acid rain rainbows the parade tie-dye, the marchers photograph their chemical shadows and post in Renaissance filter, reflections in oil paints. Pride bellyflops into a harbor of profit. The portrait artist hired by the mayor works until sunset, then lies down in the surf and dissolves, skin floating off clear as a jellyfish, black formal tails trailing ink. It is so beautiful here. This child will draw your caricature for free by throwing a glass of coins in your face and raising his fingers to catch the bent light that arcs off your cheekbones. Blink and you’ll miss the moon inspecting its own bruises, reading Captain Vancouver’s letters home by the lights of a thousand rigs, miniatures available in bottles for collectors and investors. Visit soon. 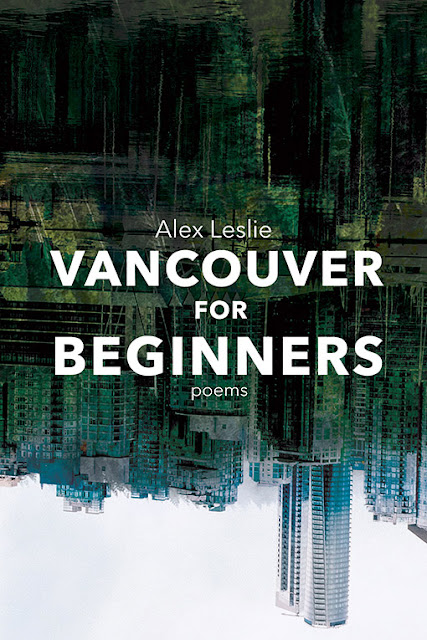 In an interview posted earlier this year, conducted by Isabella Wang for Room, Leslie describes the pieces in Vancouver for Beginners as “prose poems, free verse poems and pieces that could be read as microfictions or prose poems.” The fluidity of form and approach is curious, as though the structure of the collection is less a montage of form than an exploration between the arbitrary distinctions of genre—microfiction, the prose poem and the more traditional free-verse lyric—and the divisions that exist on either side of the contemporary prose poem. There were moments throughout the collection that I wanted her lines to be tighter than they were, but when they work, they are remarkable. While Leslie does seem far more comfortable on the prose side than on the lyric or line-break, the most compelling pieces are those that exercise a further density through whatever short form she is attempting. A poem such as “LAND REGISTRY,” as well, might be composed with short, accumulative lines, but lines that are sharpened down to bone, as the poem begins: “Every new arrival gets / a free upload.” Further on, she writes: “Diction is mineral. / Press your finger to the screen, / take it, take everything / you want, fingerwhorl stamped / in concrete.”

Vancouver exists as backdrop, but one that is explored, described and critiqued in great detail, including multiple development decisions to build, tear-down or rebuild, from the response to the Great Fire of 1886, surveyor’s maps and the infamous Woodward’s squat. As she writes to open the poem “BARTER”: “In the news today: Vancouver is tearing down the art gallery that / used to be the land registry. The barge that unloads the hybrid / cars leaves full of cedar, fat roots like fingers in the oil slick due / north. The trawler’s hold unloads flash-frozen salmon, departs / full of clouds and tickets.” The questions of Leslie’s Vancouver for Beginners seem very much to explore how a resident of Vancouver might retain their humanity in the face of so much trauma and inhumanity, from the many development decisions that seem to be actively crushing communities and individuals of that same humanity, to writing around Robert Picton, seasonal affective disorder and the list of murdered and missing women and girls, as in the poem “INTERSECTION,” that begins:

Nobody stopped to watch. They
erected a coffin in the centre of the
intersection at Granville and Georgia
while the Missing Women’s Inquiry
was taking place in the office towers
above. When I walked to work from
the train station, the coffin was
surrounded by a zoo of commuters,
suits, some protesters. Three
concentric rings around the coffin:
placards, navy police uniforms, then
the scarves and blankly beaming
screens of passersby who had come
to warm their hands in the glow of
tragedy, or were only curious. Maybe
they didn’t know what they were
looking at. Cold-weather tourists.
The news was everywhere.