A HUMAN WITH FEELINGS

I am having trouble today. How gauche it is to be in this body being unseen by you now. And I am wearing to bed the floral shirt I bought you, because it’s the only thing that keeps me intact. You are not you anymore and I’m trying to understand how a human with feelings disappeared. You were mine. You were floral. You were more than a presence felt. But I fight to find you among the loudest, drunkest voices laughing at me when I go to their bars. Where are you? You held me in so many of them.

American poet Prageeta Sharma’s fifth full-length poetry title, the first of hers I’ve seen, is the powerful and heartfelt Grief Sequence (Seattle WA/New York NY: Wave Books, 2019). Following her poetry collections Bliss to Fill (Subpress Collective, 2000), The Opening Question (Fence Books, 2004, winner of the 2004 Fence Modern Poets Prize), Infamous Landscapes (Fence Books, 2007) and Undergloom (Fence, 2013), Grief Sequence is very much composed as a grief diary, set as a sequence of prose poems begun after the death of her husband, as she writes in her afterword, “THE MOON HAS SET: POETRY OBITUARY”:

I am exploring my attachment during this grieving process.

So I am now out a full year and am still very much in a complicated but life-changing grieving process, exploring the notions of narrative and attachment.

These are the facts: I lost my husband, composer and artist Dale Edwin Sherrard, on January 14, 2015, after his fight with esophageal cancer.

This is the fact and narrative, my obituary of his dying days, his death days. 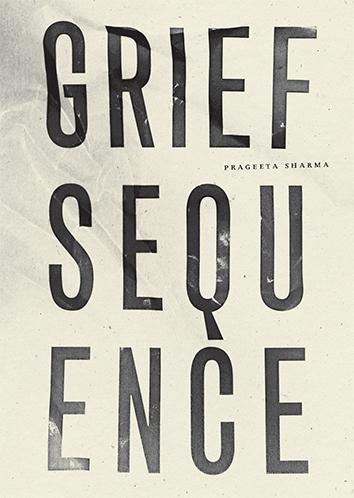 “After Dale’s sudden cancer,” she writes, to open the poem “GLACIER NATIONAL PARK & THE ELEGY,” “his body wasting swiftly / to death. / I didn’t believe in love or beauty,                    or my / ability to write poems. / And my grieving turned into a sequence of / writing / hostile little elegies / in solitary sittings.” Sharma writes out a kind of photo album, presumably composed as they occur, leaving their sequence in an order prescribed to memory over any narrative order. In many ways, this collection is reminiscent of the “I remember” vein of books such as George Bowering’s similar exploration on grief after the death of his friend, the painter Greg Curnoe, in The Moustache: Memories of Greg Curnoe (Toronto ON: Coach House Press, 1993), as well as earlier, more well-known, works by Joe Brainard and Georges Perec (both of which were titled I Remember). Sharma composes her collection as stand-alone prose poems set one against another against another; poems that can’t help but react to each other, even if they work out of any particular sequence, existing just as much as a single, narrative thread. One step and then another, but not one necessarily begun with the idea of publication, instead focusing on writing her way through, and potentially out the other side, of grief. In an interview conducted by Thora Siemsen and posted at The Creative Independent on December 15, 2017, Sharma responds:

I think that in the past I was trying to look at what in literary tradition allowed me to feel liberated or free. But in the last three years I’ve just been working through ideas of grieving. I am writing through ideas of grief and trauma and exploring how the obvious cliché that life is for the living has really been depressing and yet important. Poetry has allowed me to go deeper into thinking about what it means to grieve, and love, and to make difficult choices that are about will.

Poetry can will certain senses into my daily life. I’m trying to will ideas of my noble self. At any age we can experience a lot of death, but I think you start to lose your mentors and you start to lose your loved ones. That can happen to people at any age, but it’s just been a little shocking to me lately. I’ve just been examining what it means to have poetry document our ideas of ourselves and how that shifts. If you don’t work through documenting that moment, you may lose it. You lose something precious about a self that you understand in a moment.

Non-writers would say things to me, particularly in support groups with widows and other grievers, like, “When you’re raw, you can only be around people who understand your rawness around trauma.” I didn’t understand that. I didn’t understand that there are expiration dates around what people can tolerate, about what you are doing or what you are going through. Poetry seems to be a mediated space where people accept the content. It’s a fair place for the content that is both raw or explored. Whereas in your quotidian life you have to prove you’re at certain stages of wellness. The poem is a timeless place where you can go into the spaces that you may not be able to socially or emotionally.

What becomes clear through these poems is not just an exploration of grief, loss and marriage, but an articulation of flailing, and a desperate attempt to find ground and balance through such an intimate upheaval, one that feels all-encompassing through the process of it, and for some time after. Hers is an array of heart-wrenching detail and meditation among the more mundane facts around death, dying and grief, all of which is mixed together with remarkable effect. “I remember distinct feelings of being the marginalized spouse,” she writes, in “MY POEM ABOUT FALSE FRIENDS,” “with two selves seen from the corner of an eye by the likes of you. I was the one that was seen, and also the one who felt a loose grip with that appearance. Your two bro-friends did see me as much less because I was a misshapen bag of stress and feeling the burden of racialized markings.”