If you were in need of forgotten memory
or to seek the place of displacement
refreshed, as in, the sailors we
cleaned. / Foretold or not, these were
the promisings / we beyond (collaboration)
(promises) (carrots) (we want)
// and though the scientist speaks of
what you want to know, you cannot hardly
listen // as the rocks were
additions from the time before the land
emerged / and then attached / and then
separated / by mar / shoreline receding /
but the human remains still uncovered
in the earth of ocean
if the “facts” “create” “imagination”
//
deforested & replanted
here (in the tropics) in ten years
thick—a path in constant need
of maintenance—or redistribution—sprouts
eliminated, at most (“”)

Buffalo, New York “poet, translator, aerialist, and teaching artist” Christina Vega-Westhoff’s full-length debut is Suelo Tide Cement (New York NY: Nightboat Books, 2018), the manuscript of which won the Nightboat Prize for Poetry in 2017. I’ve only recently discovered Vega-Westhoff’s work, thanks to this years’ volume of P-QUEUE [see my review of such here], so the opportunity to work my way through her debut is one I’d been looking forward to. According to Google, “suelo” is Spanish for “ground,” which makes her title translate to “ground tide cement” (although the titles of her sections suggest a better translation might be “soil”). Set in a suite of five sequence-sections—“SUELO,” “ON SUELO │ SOIL,” “TIDE,” “CEMENT” and “COMPOST/COMPOSED”—the poems in Vega-Westhoff’s book-length lyric eco-poetic exist as an accumulation articulating an erosion, working from the ground up, writing the ground wore down to impossible bone. “The exotification of rock then—would it / be a sensual elopement or a question of / returned sight. How far back if / time is imaginable as any other / (than) fairytale. It was the calm / thought today that seemed out of place.” (“SUELO”). As she responds as part of a 2017 interview at The Public, conducted by Cory Perla:

Eco-poetry is getting through ecology. There are connections to place and people and to whatever our webs are. People think of environment—I think of poets like Ed Roberson. You can talk about ecological justice. I guess people like poetry that is engaging with the current situation of the world and our local place especially. How does language inform existence? What does language have to do with how we’re thinking? You were asking about the difference between Tucson and Buffalo—how does the place have to do with how we’re thinking and engaging with each other? 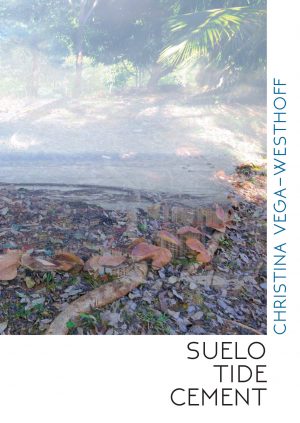 In her talk of stone, there is something slightly reminiscent here of work done over the past decade or so by Canadian poet Don McKay, working a conversation of ecology (his being both far more direct and subtle) through stone. Through long, thoughtful stretches of staccato, Vega-Westhoff’s lyric fragments distill, instill and wash over with such grace and energy that I haven’t seen in some time, and make me eager to see where her writing might go next (I am, admittedly, disappointed that her section in P-QUEUE is one of the few without accompanying author statement; I would like to hear more from her on her thinking and process). There is an enormous amount of power in her writing, one that is simultaneously forceful and restrained. “in the task of destruction / after the visa acquired,” she writes, as part of “CEMENT,” adding, further on: