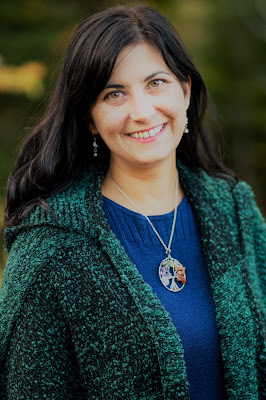 Jennifer Houle’s work has appeared in numerous literary magazines, most recently The Northern Review and Poetry is Dead. Her first book, The Back Channels, was published by Signature Editions in 2016. It won the J.M. Abraham East Coast Literary Award for best book of poetry and was shortlisted for the Gerald Lampert first-book award. Her second book, Virga, also with Signature, was released in 2019. She lives in Hanwell, New Brunswick, with her family.

1 - How did your first book change your life? How does your most recent work compare to your previous? How does it feel different?
My first book pulled me out much more into the world of readings and connecting with the wider literary community, which has been invaluable.  It went on to win an East Coast Literary Award and be nominated for the Gerald Lampert Award.  This recognition was astounding to me, and had the effect of really humbling me and making me want to try even harder.  It also gave me a little more credibility, I think, and with that came a sense of some kind of liberation. My second book is rawer than my first. Braver.  It was put together over a much shorter period of time, and there's an intensity to it. It deepened my sense of myself as a writer with a distinct vision and voice.

2 - How did you come to poetry first, as opposed to, say, fiction or non-fiction?
I don't know for sure, but I suspect it had a lot to do with having been utterly enchanted by the rhythms in an old university book of my father's, when I was about eight years old and read Edgar Allan Poe's The Sleeper.  I still hear it: Softly dripping, drop by drop/Upon the quiet mountaintop. . . There's a musicality and magic to poems that will always call me back. They're talismanic.  In writing poetry, I work out my own thoughts. I go deeper than I do when writing prose. Layer upon layer of meaning can be intertwined and crafted into something more than the sum of its parts.  I know this can also happen with prose, but for me, it is much more immediate with poetry.

3 - How long does it take to start any particular writing project? Does your writing initially come quickly, or is it a slow process? Do first drafts appear looking close to their final shape, or does your work come out of copious notes?
Oooof.  Once in awhile, a poem comes to me fully-formed, requiring very little revision. More often, however, I get a spark, a hint of an idea, or a line occurs to me, and I ruminate on it for some length of time.  I do have copious notes, spanning decades.  My second book emerged almost entirely from those notes. But every project is different.

4 - Where does a poem usually begin for you? Are you an author of short pieces that end up combining into a larger project, or are you working on a "book" from the very beginning?
I think I'm with Keats, believing that poetry should be ''proved upon our pulses.'' Poems begin for me with something deeply felt, a spark of inspiration, intense emotion, serious confusion, or rarest and best of all - a line somehow springing up, unbidden, in my mind, like a wildflower, and demanding that I follow it. Right now, I’m working on a book, but it’s certainly disjointed, and that suits me fine.

5 - Are public readings part of or counter to your creative process? Are you the sort of writer who enjoys doing readings?
I love to do readings.  They can be awkward, as when only a handful of people attend.  But even then, I love having the opportunity to interact with an audience. The struggle for me is to take myself seriously enough, to believe that I am worthy of their time and attention.  The more readings I do, the more confident I become, and I couldn't be more grateful to those who attend.  How many people get to stand in front of a group of readers and thinkers and share the things that have inspired them to create something – and the work created? That's a gift.

6 - Do you have any theoretical concerns behind your writing? What kinds of questions are you trying to answer with your work? What do you even think the current questions are?
I would say there is always some sort of theoretical concern behind my work. Very, very rarely do I write a piece only for its aesthetic or aural quality. It’s fun to get lost in wordplay, but unless I’m working something out, then it probably won’t hold my attention very long. I seem to always circle back to material that concerns identity and meaning-making in a convoluted, pre-existing culture fraught with contradictions and cruelties, even when all seems light. I would say I am also interested in ecopoetics and my work often includes careful considerations of the landscapes I inhabit. I think about the human relationship to the natural world a lot – about what can move a person to act, to risk, to change – or not change.  I don’t necessarily write about climate change, but it’s there, haunting everything. I would argue that it is the most pressing question, currently. An emergency that will come to define us more and more.  I also write a lot about women, space, stars. . . the old gods and goddesses.  I think, no matter what, it’s important to keep in touch with the numinous and mysterious. What we don’t know remains vital. . . I follow a lot of white rabbits towards what I don’t know.  I always want to peel things back, get to the next layer of meaning, go deeper.

7 – What do you see the current role of the writer being in larger culture? Does s/he even have one? What do you think the role of the writer should be?
There are so many different kinds of writer that I’m not sure how to answer this. However, the pen is mightier than the sword and writers wield the words. They craft the stories, and it is stories that change the world. What about poets?  They are storytellers too. Meaning-makers. They certainly don’t have enough influence in Canadian culture, and their voices aren’t often included in public discourse, but who knows what leaders they inspire in quiet hours? You have novelists, documentarians, journalists, copywriters, songwriters, screenwriters and playwrights, all having myriad conversations with their audiences.  Pretty sure not all of us are the unacknowledged legislators of the world, but hey. A couple might be. So, I would say that the role of the writer is to engage readers, move our collective story forward, and deepen that story – make it matter more and make it better, kinder, and wilder. Then there’s the quest for truth and the critical need for truth-tellers, though I struggle with the word “truth,” particularly as pertains to the big picture.  Maybe “honesty” is a better word than “truth,” given the shiftiness and tendency to transform and evolve of the latter.

8 - Do you find the process of working with an outside editor difficult or essential (or both)?
I’ve been lucky to work with great editors to date.  I’ve always found it to be helpful. I’m pretty stubborn, but I don’t think I’m precious about my work.  Every editorial suggestion is an opportunity to improve, or at least think again. Especially when I’m trying new things.

9 - What is the best piece of advice you've heard (not necessarily given to you directly)?
A former supervisor once said “be good to your profession, and your career will take care of itself.”  I remind myself of that almost every day.

10 - What kind of writing routine do you tend to keep, or do you even have one? How does a typical day (for you) begin?
I have two young children. My routine is their routine. I also work full-time. So I write when I can, in the moments between everything else. Maybe someday I will have the luxury of a writing routine, but for now, it’s all by the seat of my pants.

11 - When your writing gets stalled, where do you turn or return for (for lack of a better word) inspiration?
Poetry. Astronomy.  Dreams. The ocean. The woods. My loved ones.

12 - What fragrance reminds you of home?
Concrete after rain. Cedar.  The musty smell of a hardware store. Salt air. And a very specific scent generated by wooden bannisters in older buildings. I have no idea what compounds that smell is comprised of, but it transports me right back to childhood.

13 - David W. McFadden once said that books come from books, but are there any other forms that influence your work, whether nature, music, science or visual art?
Everything. People! Friends. Conversation. Nature, music, and visual art are also especially inspiring for me.

14 - What other writers or writings are important for your work, or simply your life outside of your work?
Too many to list. Right now, I am deeply interested in women writers of the 18th and 19th century, particularly Germaine de Staël. She, I would say, is my longest running muse. I also still love Erica Jong and will be forever grateful to her early novels for sparking a raucous sense of literary (and lived) questing in me.  The poetry of Wisława Szymborska blew my sense of what poetry could be open wide, so she has also been a tremendous influence.

15 - What would you like to do that you haven't yet done?
Ride in a hot air balloon.

16 - If you could pick any other occupation to attempt, what would it be? Or, alternately, what do you think you would have ended up doing had you not been a writer?
I do have another occupation – I have worked in the public affairs and communications industry for almost 15 years.  My greatest regret is that I never studied sciences, particularly astronomy and botany, two fields that fascinate me. I read as much as I can about both.

17 - What made you write, as opposed to doing something else?
Genes or divine ordinance, not sure. Mercury was in Sagittarius when I was born? The Moon was conjunct Jupiter? A great-aunt of mine was also a writer, maybe we share a genetic predisposition? Luck? I happened to spend a lot of time in a basement full of books as a child and something was triggered?  Because I have a lot to say, I am curious about many things, I like to think on the page, and I cannot resist.

19 - What are you currently working on?
I’m working on a project that has been simmering with me for all of my adult life, born of a deep interest in the French Revolution, 19th century literature and thought, our current political climate, the need for more women and minorities in politics, my own identity as a writer, and the concept of literary foremothers and legacy.  I’m going really deep with this project, but I have to admit – I have no idea how it will turn out.

Posted by rob mclennan at 8:31 AM
Labels: 12 or 20 questions, Jennifer Houle, signature editions